Swiss band Eluveitie hit The Gov on Sunday May 22nd to an appreciative crowd of loyal fans. 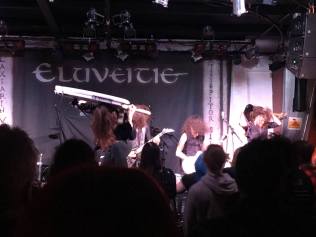 The main act was well supported by Orpheus Omega, an Australian five-piece Melodic Death Metal band. They played a tight set and worked the crowd. The highlight of the show was their Keytar player, Keswick Gallagher; apart from adding the synths that filled-out their sound, he put on a show of his own, often playing it behind his head.

Eluveitie came on stage at 8.30 and played, roughly, a 90 min set. The studio albums rely heavily on setting the right atmosphere for the music and the live show was no different, with the same sort of backing tracks used to build up the atmosphere before they took the stage. 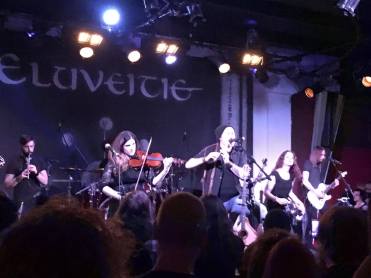 The band is made up of Chrigel Glanzmann on vocals, mandola, whistles, pipes and acoustic guitar; Kay Brem on bass guitar; Merlin Sutter on drums; Ivo Henzi on rhythm guitar; Rafael Salzmann on lead guitar; Matteo Sisti on bagpipes and whistles), Anna Murphy on hurdy-gurdy and vocals; and Shir-Ran Yinon on violin and vocals.

The Celtic folk instruments are obviously what makes Eluveitie’s music stand out; Both Murphy and Yinon are great performers who were excellent at building up the atmosphere and working the stage.

As acknowledged in my recent interview with Glanzmann, this would likely be the last time Anna Murphy, Merlin Sutter and Ivo Henzi would perform with the band in Adelaide as they were due to leave the iconic 10-piece after all current tour commitments are fulfilled.

For ‘Call of the Mountains,’ Murphy announced that they would be singing it their native language, rather than English (which the album version and single is in), which was pretty cool.

The acoustic part of the set included both guitarists on acoustics, Glanzmann on mandola, violins, HG, and Sisti playing various instruments.

After playing a couple of songs from their acoustic album, Evocation I: The Arcane Dominion, Glanzmann mentioned that they have started work the long awaited follow-up, much to the crowd’s delight.

The small, but enthusiastic, audience was intense and energetic, and it became a huge singalong when they finished with ‘Inis Mona’, making for an unforgettable show from a unique and iconic band.

Review and photos by Nutman