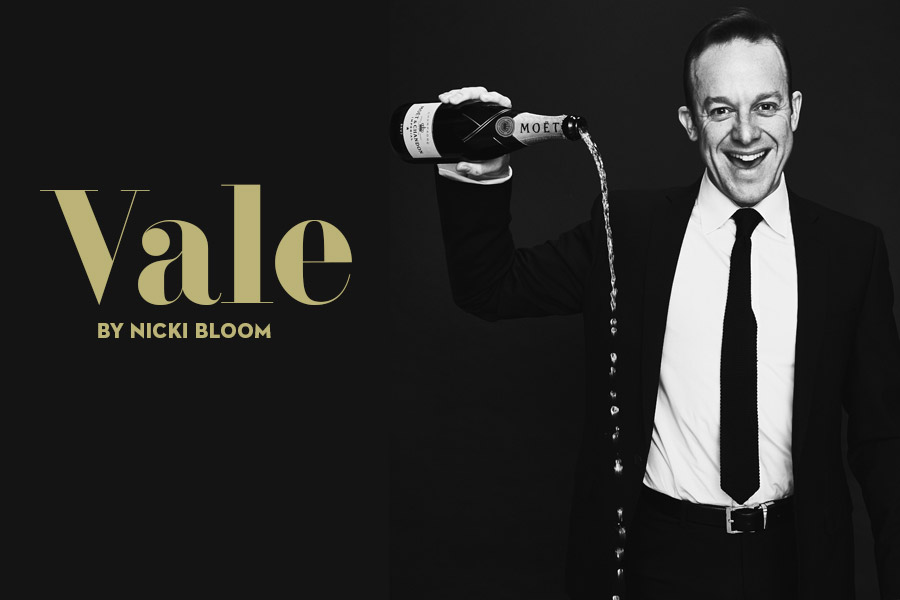 One part drawing room farce, one part family psychodrama, it is a play that never really resolves its identity, and as a result, it fails to fully satisfy, regardless of whichever theatrical category you consider it should fall under.

Set on one particularly visceral New Year’s Eve in the penthouse suite of the flagship of the Vale hotel chain, where, as per established end-of-year family tradition, the gauche, nouveau-riche hotelier, Joe Vale and his wife, Tina, are throwing a ‘party’ for their daughter, Isla, and her current boyfriend, Angus.

When the lights first came up, audible gasps were heard around the theatre such was the impressive impact of Mark Thompson’s deliberately ostentatious set design. If you can imagine The Great Gatsby’s Myrtle Wilson as having chosen the décor then you will have some idea of what to expect.

The play starts promisingly. In the first act, Bloom’s dialogue is punctuated by a stream of finely honed, humorous lines that draw belly laughs from the audience who recognise the clearly drawn grotesque caricatures of ego and indulgence on view here. After intermission, however, the pacing of the action falters as the plot rapidly descends into darker realms and the characters wend their way towards an all too predictable denouement.

Bloom attempts to adhere to the well-tried dramatic structures of dramatists such as Chekhov and Ibsen, but here her handling of the late revelations of hidden family truths, and the radical behavioural changes that these confessions elicit, are presented in a fairly ham-fisted manner. In order to believe in the plausibility of the events occurring in the last act, the audience is expected to unquestioningly accept a chain of unlikely coincidences; seemingly disregard the previous ninety minutes of character development, and – possibly the most audacious expectation her audience of all – forget that they had ever seen the first three films in George Lucas’s Star Wars trilogy!

Mark Saturno, plays the part of Joe Vale with an appropriately boorish intensity. He is consistently loud, insensitive and unpleasant, and treats his wife, Tina, like his personal maid. She is a woman who limply accepts her husband’s constant psychological and emotional abuses and exists in a permanent state of mental dislocation, worn down by carrying the weight of a heavy secret which is continually gnawing at her soul. Elena Carapetis, disappointingly, struggles to convincingly communicate the complexity of the damaged Tina; not fully inhabiting the role, to the point where, on occasion, when not directly involved in an exchange of dialogue, she seems oddly awkward and self-aware on stage, making it hard for the audience to suspend their disbelief enough to engage in the unfolding situation.

Tilda Cobham-Hervey, on the other hand, despite some faltering early moments where her vocal projection lacked the volume to carry to the fifth row, seemed entirely believable and comfortable in her role as Isla, Joe and Tina’s only child.

Isla, much to her parents chagrin, is madly in love with her ambitious law student boyfriend, played with energy and flair by James Smith, a young man, initially, hell-bent on entering the hotel trade on his own terms, but through first working for a rival chain – Vale’s main competitor in the industry. Predictable levels of friction subsequently ensue between the two combative males.

The revelation that Angus’s mother (Emma Jackson, in a naturally nuanced performance) has travelled to town to see her son for a late Christmas celebration, and has been invited to the soiree without Joe or Tina’s prior knowledge or consent, causes some aggressive consternation in the hosts and, fuelled by the copious consumption of Moet, it is not long before the emotional fragility of the situation is clearly doomed to be irrevocably broken.

Vale sets out to challenge the audience to recalibrate its world view, and to question whether true success and happiness can ever be achieved in a society where the pursuit of wealth has eroded all traditional values to the point where your own family members are exploited as investment opportunities, or targets for aggressive business takeovers.

Setting out on such a broad inquisition of capitalism is an admirable goal, but ultimately the play rests on the relationship between characters and the audience. So this production has to be deemed a misfire requiring, as it does, an unrealistic level of  audience empathy be given over to a set of characters who, quite frankly, are morally repugnant and who do nothing to warrant it.

Vale, directed by Geordie Brookman, is being performed at the Dunstan Playhouse until 3 December. Tickets available from the usual outlets.