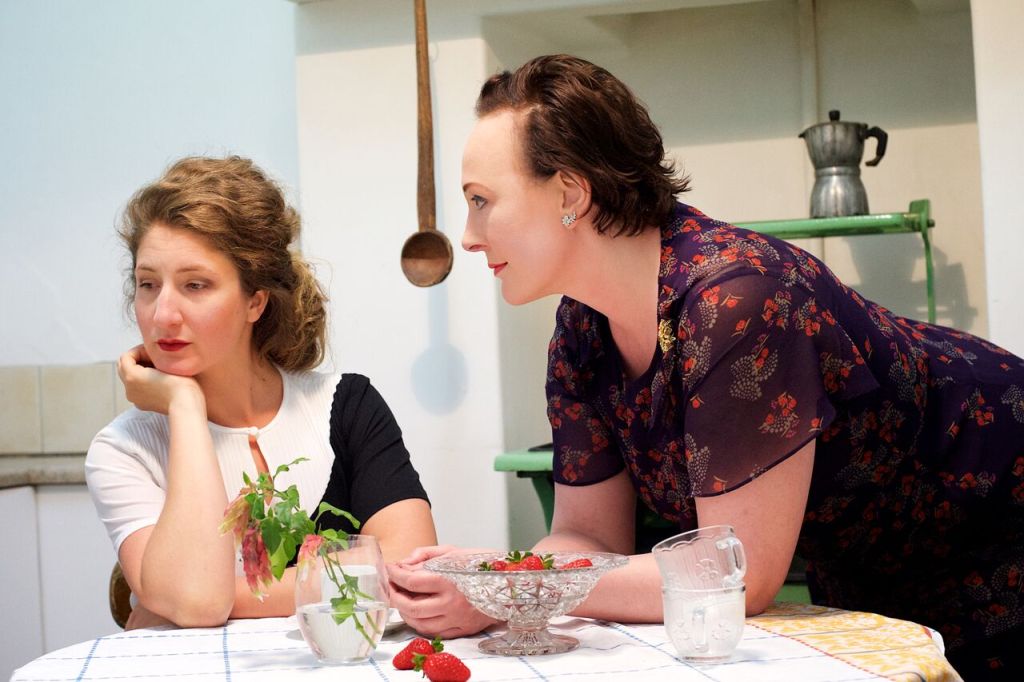 Fefu and her Friends, written by María Irene Fornés in 1977,  is an unusual theatre experience, however an enjoyable and important one which puts female performers front and centre.

Held at the Bakehouse Theatre, Fefu and her Friends begins act one with the title character, as played by Krystal Brock, in Fefu’s loungeroom in 1935 with her friends Cindy and Christina (Rahimah Russell and Josephine Pugh), with the discussion led by Fefu around the somewhat dangerous games she plays with her off-stage husband, as well as her general views implying that feminine characteristics are weaker than masculine ones. Other characters arrive for a rehearsal for a charity presentation of which every character has a part, with dialogue occurring between the almost every character.

For those not familiar with the play, the second act is when the audience is divided up into four groups and taken to four different scenes – bedroom, library, kitchen, and outdoor – with different characters in each room presenting the action. After witnessing each scene, the third act occurs back in the loungeroom, with each character back together again as they go through their rehearsal.

The staging for Fefu and her Friends allows for a certain intimacy right from the beginning, and the Bakehouse Theatre provided the perfect backdrop. As well as the usual theatre seating, there is also seating right up against the loungeroom set up, allowing audience members the option of feeling like they are in the space with Fefu. The staging for act two certainly adds to this feeling, as audience members are standing in tiny spaces, only a metre away from characters doing tasks such as filling a glass of water while talking about love and relationships. In this sense it is not just a show, it is an experience, where the audience is invited to be a fly on the wall to these women’s intimate discussions. There is an uncomfortable feeling that goes along with being so close, yet also behaving in such a way as an audience member where you are pretending to not be there at all.

The performances of the entire cast makes the interactions between each character feel real and lived. Krystal Brock as Fefu and Mikayla Lynch as Emma embody the strong, leader-type personality traits their characters have, and certainly drive a lot of the dialogue in acts one and three. Krystal Brock especially shows great vulnerability at times when given the chance to go deeper than the persona Fefu shows her friends.

Stefanie Rossi as Paula and Amanda Phillips as Cecilia also have some great scenes together, and at times it was hard to take your eyes off them during the group scenes, as there were many little nuances in their performances that showed the depth of the longing and hurt that exists in their relationship.

Each cast member adds an important ingredient to the show, and it is probably also a testament to Jon Hartog’s direction, as well as the talented cast, that you really feel like you are in a loungeroom from 1935, experiencing the same conversations around the expectations and feelings of women from that era.

Despite the setting of 1935, Fefu and her Friends still feels relevant today when conversations around gender equality are still ongoing. It is great to see a production of a completely female performed and written play, especially one of such high quality. Fefu and her Friends is certainly not your average theatre experience, but it is a highly enjoyable and recommended one.

Fefu and her Friends is playing at Bakehouse Theatre until Saturday 1st of December. Buy tickets here.