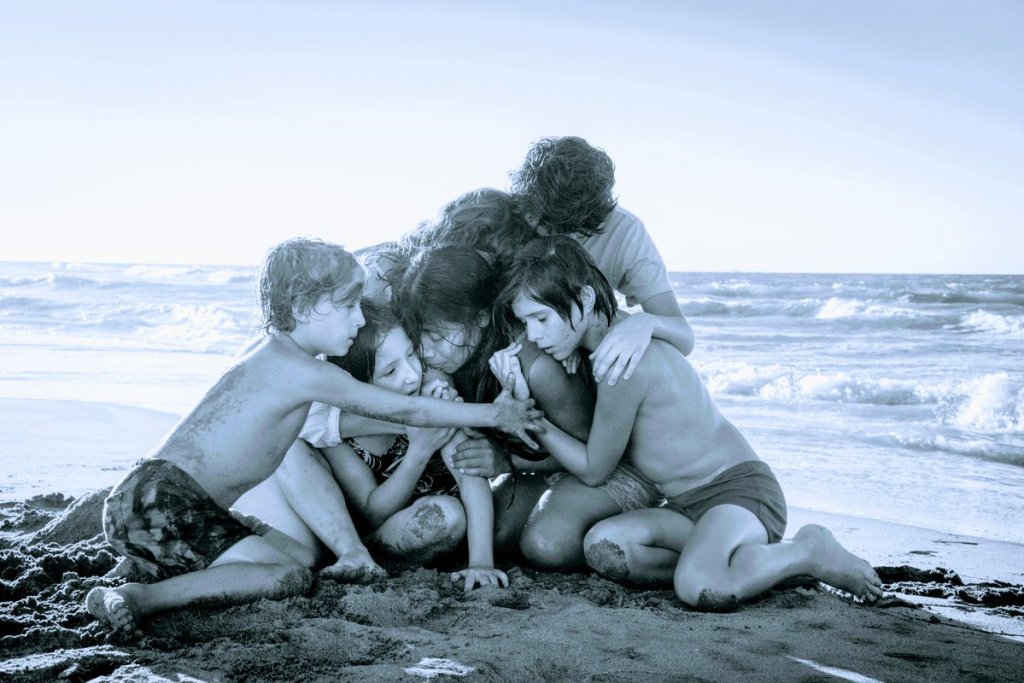 Aaron Nash sums up the world of cinema for 2018 for The Upside News, delivering his verdict on the top ten films released this year:

A stop-motion animation set in futuristic Japan wherein 12-year-old Atari sets off to rescue his dog from being exiled to Trash Island.

Like Anderson’s previous stop-motion work with Fantastic Mr Fox, this is wonderful, beautiful, weird and with everything in its right place. The detail is impeccable, the humour as deadpan as ever, and the voice cast on point.

Anderson draws references and inspiration from sources too countless to mention but his style is very much his own. A natural progression of his work but with new tones, this is another pop art masterpiece from a modern auteur with a genuine affection for Japanese culture…and dogs.

When four career criminals die in a failed heist, their widows pick up the unfinished business and attempt to pull off one final job.

The art-house action film is a rare thing and Widows suggests there should be more of them. This is a sophisticated heist thriller with the scale and scope of films such as Heat. It’s tense and exciting but, just as importantly, has a depth of well-written characters and a healthy dose of commentary on subjects such as racism and sexism.

As expected given such past work as 12 Years a Slave, McQueen’s direction is sublime. He’s not afraid to show off behind the camera but it’s always in service of the story. The film moves at a terrific pace but also isn’t afraid to stop and take a breath occasionally. This isn’t a lull in action, mind you, but an opportunity to explore the margins of what this film is really about. All the performances are excellent too, particularly the immensely watchable Viola Davis and Daniel Kaluuya, who continues to impress and surprise. Honourable mention to Best Supporting Dog.

A black comedy about the power struggle following Stalin’s sudden death in 1953 in which the British and American actors all perform with their native accents. It sounds like a terrible idea on paper but it’s executed here to near perfection.

It’s a wordy film, full of scathing dialogue and biting one-liners, but Iannucci’s inspired blocking and camera placement elevates the film above a simple reading of great dialogue. Simon Russell Beale is the standout amidst a cast that includes Steve Buscemi, Michael Palin and Jeffrey Tambor.

This is a welcome satire of men as much as a satire of politics. The Death of Stalin is consistently hilarious, but even more so ridiculous to think that most of this actually happened.

A dark, sweet fairy tale for adults, like Beauty and the Beast but with a few key differences – like, for example, this is about a mute janitor who falls in love with a giant man-fish. It’s just weird and strange enough to succeed as a fresh take on a familiar fable.

It’s a love story at its heart but with nods to other genres such as Cold War science fiction, monster movies, classic noir and even Hollywood musicals. It has giddy old-school movie magic but also manages to incorporate more progressive themes than Disney, for example, could ever muster. (I’m also a sucker for movies that love movies as much as I do.)

The cast is uniformly excellent, particularly Sally Hawkins, who makes us believe and care about such a truly ridiculous premise. Del Toro makes it all work with such incredible sophistication, craft and ease. His fingerprints are proudly all over this.

Sweet Country is an extraordinary Australian film that builds on the language of American westerns but feels fresh, modern and unique thanks to some subtle yet unconventional editing and prominent use of indigenous voices.

The story may not hold too many surprises – an Aboriginal man is pursued and prosecuted for killing a white man in self-defence – but the truth and honesty of its depiction is startling. Warwick Thornton’s direction and cinematography is stunning, and though the film is long, it accumulates plenty of power as it goes. It is a distinctively Australian film, always relevant, and set to become a new Australian classic.

You probably already know what this is about. If not, it’s about the relationship between a rock star on the way down and a new emerging artist on the way up. The story is admittedly pretty shallow but I was won over by the authenticity and immersiveness of the performances. Its biggest flaw is that the rest of the film can’t live up to the intoxicating first half hour but it nevertheless rises for the finale.

Bradley Cooper directs with a clear and potent vision – and he also gives his best performance yet – but the real star here, unsurprisingly, is Lady Gaga. She owns this film, not just with her incredible vocal performances but also in more subtle moments of character and in her undeniable chemistry with Cooper.

I admit I’m a fan of this kind of naturalistic musical where the songs appear organically and diagetically, like Once or even Cabaret. The songs here are not only good but they’re as vital to the film as the dialogue. They practically are the dialogue.

With shades of Hitchcock and gothic British dramas from the ’40s and ’50s, Phantom Thread stars Daniel Day-Lewis as a London coutourier who takes a young waitress as his muse. It starts out more or less how you’d expect but gradually and subtly shifts its focus to something completely unexpected.

What a magnificent pleasure it was to luxuriate in these textures for two hours and to soak up its images, its sounds and the grain of its film stock. Everything here is so finely tuned but special mention must be made of PTA’s shot compositions and Jonny Greenwood’s stirring score.

This is unlike any of PTA’s previous work but probably closest in tone to The Master. Lesley Manville and Vicky Krieps more than match the great Daniel Day-Lewis in this pas de trois but perhaps the real star is PTA behind the camera as he slowly but surely ratchets up the tension until its bizarre and perverse conclusion.

In Faces Places, 88-year-old French New Wave icon Agnes Varda and 33-year-old visual artist JR travel around France in a van that looks like a Polaroid camera, making giant portraits of people and pasting them onto their surroundings. Shirkers tells the story of Sandi Tan, who in 1992, aged 20, shot an independent feature-length movie with her friends. Their mysterious mentor then disappeared with the footage and was never heard from again. 20 years later, Tan tracks down the footage and reclaims it to create something new.

These incredible non-fiction films are otherwise completely unrelated but I’m grouping them together because they have so much to say about the joys and challenges of creating art, particularly for women. These films do more than simply document a creative process. They create art out of art and continue that conversation for a new audience.

Shoplifters is about a family who copes with poverty by stealing groceries. On their way home one day, they decide to take in an abandoned five-year-old girl who they found in the street. It sounds grim but, in fact, is effortlessly heartwarming without ever becoming sentimental or contrived. It’s a tricky tonal balance but succeeds on the back of its rich cast of characters and their empathetic depictions.

The plot develops slowly but Kore-eda is mostly content to just observe his characters in this fascinating environment. He builds moments so sensitively and his shot composition is wonderful; the 35mm cinematography warm but brittle like the family dynamic. With allusions to Ozu and Dickens, this is a brilliant exploration of what makes a family, and furthermore, the difference between what is good and what is right.

The plot of Roma can be summarised in one sentence but it would tell you nothing of what this film is about. Put simply, it’s about childhood memories and the people who pass through our life.

Roma is gently experimental, intimate and quietly audacious. Cuaron shoots in long, wide shots as if passively peering in on the past. Little events play out in slightly exaggerated ways, just like how memories distort and change over time. Small details emerge in the background of the frame. We remember things the way we want to remember them.

Roma is a cinematic memory unlike any other; a masterwork of personal expression with a cumulative power greater than the sum of its parts. It’s also one of the most beautifully shot films I’ve ever seen.

This is a bit of a cheat since it’s barely feature-length and hasn’t played in cinemas outside of film festivals or exhibitions but I’m giving this a shout-out because of how important I think it is that this film be seen as widely as possible. This 55-minute mash-up of Australian history is like the cinematic equivalent of The Avalanches or Girl Talk. It ingeniously splices together footage from just about every iconic Australian film you can think of but in such a way that it rewrites the narrative for indigenous Australians, queer people and migrants. Our political leaders get their comeuppance in Mad Max 2; Skippy delivers some woke commentary on the colonialist implications of Picnic at Hanging Rock; and homoerotic undertones are revealed in The Man From Snowy River.

It’s a dizzying assault on the senses, nirvana for cinephiles and a kick in the guts for how Australia reads and writes its own history. Infamously branded “un-Australian” when the Ian Potter Foundation withdrew its support for the film (after having seen a final cut), Terror Nullius forces us to reconsider our nation’s history and what that problematic word even means. Do not miss an opportunity to see it.

Aaron Nash is a Screen Studies graduate from Flinders University. When he’s not watching far too many films, he can be found playing keyboards in various bands around Adelaide.