Pagan made a gigantic impact with their sensational debut album ‘Black Wash’ last year. Not only did it gain them fanfare in Australia but it saw them undertake their first European tour to great success. Now, Pagan brings ‘Black Wash’ back around Australia to baptise those who are yet be christened with Pagan’s red wine.

Before Pagan performs at the Crown and Anchor on Thursday, April 18 we chat with vocalist Nikki about their “surreal” year.

“It’s been insane,” Nikki explains over the phone from Melbourne. “When we released the album I never expected we’d be going to Europe twice in six months, playing awesome shows to packed out crowds in Australia and overseas and the record has just been received so well. Especially because it’s been our first one, we’ve put so much into it and we did the best we could do at the time. I’m just really proud of us.”

It was unexpected to see Pagan make such a big impact with their debut album and first official studio recording as a band. However, each member of Pagan is far more experienced than most band’s releasing their first album.

“The guys have all been playing music for close to 20 or 15 years, I’ve been playing music for about eight years now and Pagan has been about four years. I used to be in a punk band with our bassist Dan, he had the idea to create Pagan, a heavy band with three of his favourite musicians. I’d never met the band before, we knew of each other but we’d never hung out. We all went out one night and had a test to see how we get along and we had the best tonight and we instantly all became best friends. The rest is history.”

Pagan’s live show isn’t a normal metal show, it’s more of a heavy metal disco with cult-themed imagery, hot pink neon lights and bottles of red wine, which has made the band notorious.

“We never had a plan of what we’re going to do onstage or what the live shows were going to be. We knew from the start we wanted to use the cult theme, play it up and have the Pagan cross everywhere. We knew we wanted that side of it. With the live shows and my performance style being quite theatrical, that’s just come from a really authentic place, I’ve never gone on staged and planned to spill red wine down my shirt or dance the way I dance, I move to the music the way I want to move to it. I think that’s the mantra of Pagan, we just do things we love and we want to do. Whether or not people like it or understand it or whether or not it fits within a certain genre of music, we don’t care. We just want to be true to ourselves.

Before ‘Black Wash’ was released the band made a name for themselves with their theatrical live shows and a handful of demos on Bandcamp. However, ‘Black Wash’ was mostly new chapters and verses.

“There are a small handful of songs from our demos that we reworked and recorded for the album. Other than that we actually wrote the album in a six month period with lots of band practices on really cold nights in a storage unit with no toilet, which was the bane of my existence because I’m somebody who needs to go the toilet like every hour. It’s really, really frustrating just watching the guys in my band just piss in the carpark and I’m like I can’t just fucking piss that easily in a car park. I could just squat on the ground but there were people walking around. So that was very frustrating for me,” Nikki laughs.

“We went into the recording studio so ready. We smashed it out in several weeks. The recording was going to be a week long but there was a personal issue that happened. It ended up being broken up into several weeks of recording. I think because we were so ready to go I recorded every single track of my vocals in one day, except for one song. It was the craziest thing I’ve ever done in my life. My stomach was so sore the next day I actually couldn’t laugh, it was insane. My voice was fine because I use my voice correctly. But my stomach muscles were so sore.”

It’s not just Australia that is impressed with the band, ‘Black Wash’ has reached Europe with high praise. Pagan made their debut overseas tour in November, which was also the first time Nikki and any of the band had ever performed overseas.

“It’s overwhelming. I always use the word ‘surreal’. We didn’t know what to expect, we didn’t know if anyone was going to turn up to the shows, we hadn’t seen many of the ticket sales from the shows, we didn’t know what London was selling like. At the venue, the stage was upstairs and the green room was downstairs, so I just made an effort to stay downstairs, I didn’t want to see people and I was getting pretty nervous, I don’t usually get that nervous. I went up to watch the support band for two minutes and didn’t look at the crowd.

“When we went up to play I walked on stage and purposely turned my back to the crowd so I couldn’t see how many people were watching. When I turned around I honestly choked on tears and I started crying, I had to get my shit together because I was about to start screaming. It was a full room in front of me, people were singing the words back and jumping around. It was surreal to have that response for your first time overseas as a band,” Nikki ends, humbly.

Pagan begin The Evil Eye Tour on Thursday 18 April at the Crown and Anchor before touring nationally. 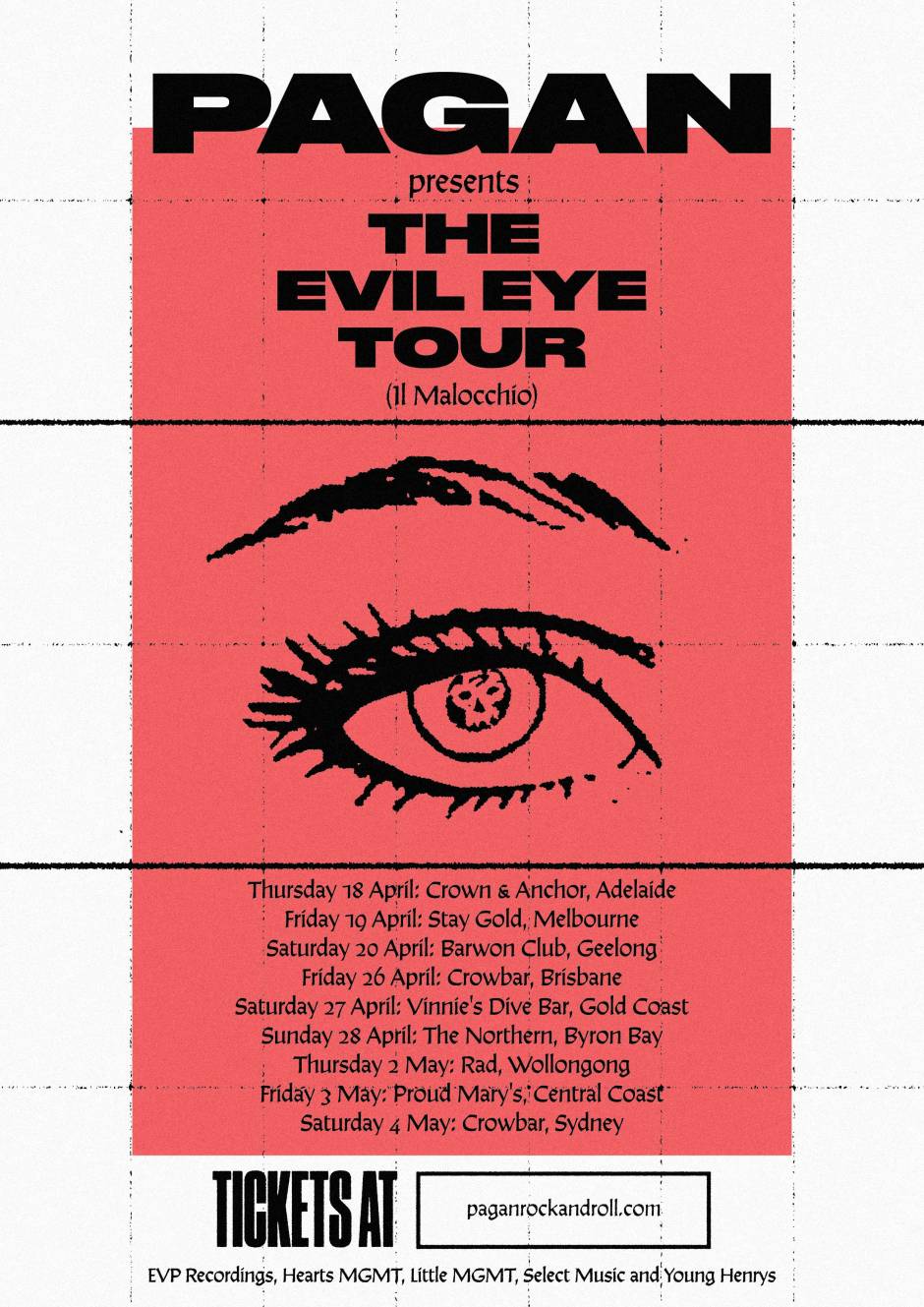