U2 will return to Adelaide this November, announcing a reprise of their 2017 Joshua Tree anniversary tour with a string of stadium dates through Australia and the region, including Adelaide Oval on Tuesday 19 November.

It will be the Irish band’s first visit to Australia since 2010 and their first performance in Adelaide since 2006, when they broke the concert attendance record at Football Park with around 60,000 at the gig.

The Joshua Tree Tour 2019 kicks off in Auckland on 8th November and will visit Brisbane, Adelaide, Melbourne, Sydney and Perth, before moving on to Singapore, Tokyo and Seoul. Tickets for the NZ/AU shows go on sale on Tuesday 11th June  2019 (times vary per city). U2.com subscribers will have first opportunity to purchase tickets starting Tuesday 4th June through Thursday 6th June with a 4 ticket limit (see www.U2.com for details).

The Joshua Tree Tour is a celebration of the original album and tour of the same name undertaken by U2 in 1987 and features the complete album played in sequence along with a selection of highlights from U2’s extensive catalogue of songs. The innovative staging includes a specially commissioned series of haunting and evocative films from Dutch photographer, film-maker and longtime collaborator Anton Corbijn – whose iconic photography accompanied the original recording – in brilliant 8k resolution on a 200 x 45 foot cinematic screen, the largest high-res LED screen ever used in a touring show. 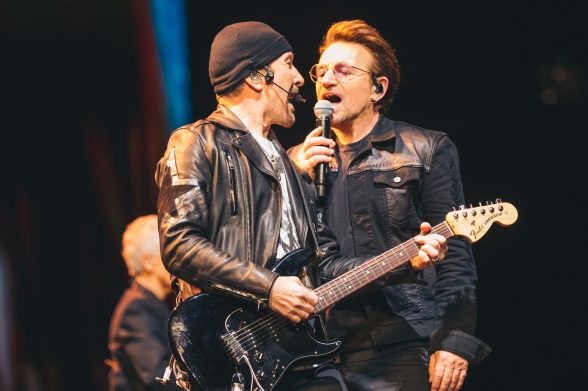 Bono said: “It’s only taken me 30 years to learn how to sing these songs and it’s great to be able to say that I’ve finally caught up with the band. Our audience has given the Joshua Tree a whole new life on this tour. Doing these shows has been very special for us, a lot of emotion… From the despair of how relevant some of the dark songs still are, to the joy, pure fun of the staging… it’s quite a ride. And now we get to do it all over again. Auckland, Brisbane, Melbourne, Adelaide, Perth, Sydney, Tokyo, Singapore, Seoul… We’re coming for you.”

“We really, REALLY wanted to bring The Joshua Tree to New Zealand, Australia and Asia” added The Edge. “We promised we would and finally, now we can say that we will see you in November… It’s going to feel like a homecoming and we are very excited.”

Special guest Noel Gallagher’s High Flying Birds is confirmed as support for  the dates in New Zealand and Australia with Noel saying, “We, NGHFB, are beside ourselves. The Joshua Tree 2017 Tour was some of the most fun we ever had. It will be both an honour and a pleasure to share the stage with our friends and comrades once again. It’s gonna be a ripper!”

In a first for any artist performing in New Zealand and Australia, and to ensure fans have the best access, stadium floor tickets for all the band’s NZ/AU shows will be paperless with delivery via mobile devices 72 hours prior to the applicable show. There will be an 8 ticket limit for general public sales.

U2: The Joshua Tree Tour is produced by Live Nation Global Touring. For complete tour and ticket information, visit: www.u2.com