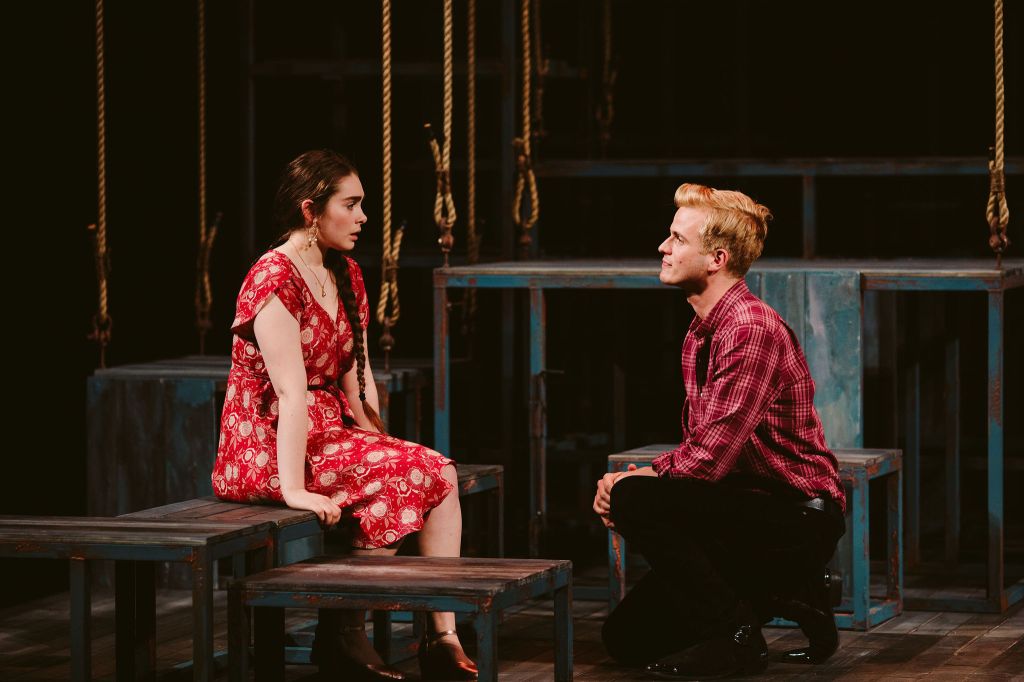 A deceptively simple stage sets the scene for a breathtaking depiction of a modern-day classic.

Written by American playwright Arthur Miller, A View from the Bridge is set in an Italian-American neighbourhood near the Brooklyn Bridge. While first performed in 1955, the underlying themes of love, obsession and fear of the other are still relevant today. Directed by Kate Champion, the State Theatre Company’s production chronicles a spellbinding tale narrated by lawyer Afieri (skilfully played by Bill Allert).

Longshoreman Eddie Carbone (Mark Saturno) lives with his wife Beatrice (the heart of the family and the story, depicted by Elena Carapetis) and her orphaned niece Catherine (a perfect blend of naivety and Brooklyn grit played by Maiah Stewardson). There is no doubt that seemingly well-meaning Eddie works hard to provide for his family; however, the dynamics shift with the arrival of Beatrice’s cousins Rodolpho (Antoine Jelk) and Marco (Dale March), escaping the poverty and hopelessness of their small Italian village and hiding in Eddie’s home for fear of deportation.

Given Arthur Miller’s experience with the House Un-American Activities Committee in the era of McCarthyism, it is unsurprising that the themes of racism and fear run through the play. It is a timely reminder that the past is destined to repeat itself, especially given the current situation around the world. The heartbreaking reality for many is portrayed subtly and effectively through Rodolpho and Marco.

Eddie’s underlying obsession and intolerance simmer just below the surface as the relationship between Catherine and Rodolpho deepens, and it is impossible for the audience not to follow Eddie’s journey into a spiral of despair and obsession. This performance is taut, uncomfortable, immersive and utterly captivating. The scenes between Allert and Saturno are pure magic, as Afieri weaves the tale and subtly sets the scene for the inevitable tragedy to come. Flashes of comic relief are provided in the form of Eddie’s workmates Mike (Brett Archer) and Louis (Chris Asimos), who bring a touch of humour into what could have been a dark and dire performance.

There are no villains or heroes in A View from the Bridge; each character is deliciously imperfect. Saturno’s Eddie is jarringly complex: a hardworking family man whose unhealthy obsession makes him a danger to himself and others. March’s Marco, with a family to feed back in Italy and a brother to wrangle in Brooklyn, is a heartbreaking embodiment of the American dream. Catherine and Rodolpho, the sweet and unsuspecting catalysts for the simmering trouble ahead, are delicately portrayed by Jelk and Stewardson, while in Carapetis’ performance as Bea, her struggle to keep her marriage and family from falling apart is palpable. Allert’s Afieri is enthralling as the bridge between the Old Country and 1950s Brooklyn as his narration deftly guides the audience through the unfolding drama.

A View from the Bridge is akin to watching an earth shattering event unfold in slow motion. The performances are flawless and weave a magic into Miller’s play that transcends words on a page. Do not miss this incredible and thought-provoking performance, which runs from 12 July to 3 August 2019. Snap up your tickets HERE.