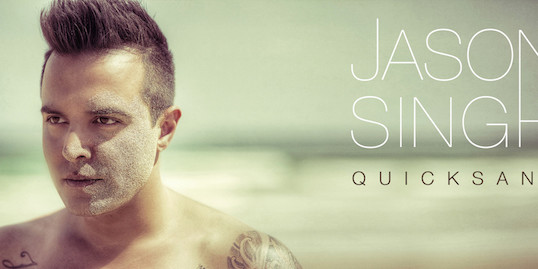 Jason Singh, best known as his role as frontman in popular 90s band, Taxiride (‘Get Set’, ‘Everywhere You Go’) has just embarked on a new and ambitious project.

Aptly titled ‘The Jason Singh Project’, the singer/songwriter is endeavouring to write, record and release a six singles in 12 months.

Opening up his home studio to fans, Jason is keeping a video diary which documents his process from start to finish, while also offering some great advice for musicians.

“I didn’t mean to do it that way,” he says. “But it’s kind of therapeutic to me to break it down like that, because while I’m talking to the people online, I’m figuring it out myself. I’m thinking out loud and making it clear for myself as well. I wanted to open the doors to my studio too and show people how I do it.”

The first product of the challenge is ‘Quicksand’, a mighty pop song with a contagious beat; and it seems the people agree, Jason reckons.

“The response to ‘Quicksand’ has been amazing. We had 40,000 plays on the song in the first week, which is unheard of, for me. I went to sleep the first night after putting it up, woke up the next day and it had 11,000 plays and I thought, that’s got to be wrong! Now a few radio stations are starting to play it so it may have longer strides in the legs to come,” he says.

But why would a performer put this amount of pressure on himself to complete a creative process to such a tight deadline?

Jason says it was the thrill of the challenge that made him do it.

“It’s something completely different, for a songwriter, to put that added pressure of a time limit. Most records I made with Taxiride did have a time limit, but they could always be moved depending on budget but it was a real challenge to step it up and put it out every eight weeks, whether I’m ready or not,” he laughs.

“I’ve got no regrets as yet! The first track turned out unreal so I’ve started on the second song. We’re a couple of weeks in but I’ve been promoting the first song. That’s been an interesting thing because I’ve got one hand in one world and the other hand in another world.”

The idea for six songs in 12 months started as an initial concept revolving around the weather, but soon took on a different shape, however Jason isn’t sure what the final product will be.

“I wanted to do this over 12 months because, being from Melbourne, I’m really influenced by the weather. Initially I was going to do an EP every season. So I was going to put out an EP in summer that was really ‘up’ and dancey, then one in spring that was kind of pop, then a rock one in autumn when the leaves are falling off the trees, and then winter would have been ballads and sadness. So this one coming up next will be a real summer song reflecting how I feel with the weather coming in,” he says.

“I don’t know what the final outcome will be. I’m just making it up as I go along. There’ll be six songs and six remixes, so there’ll be enough for an album and definitely a tour. If they get more and more popular as they go along, hopefully I’ll be forced into that situation and bring the songs out to the people. Playing for people is what I do most, so I hope so.”

And speaking of playing, ’90s pop rock sensation Taxiride have reformed, due to Jason’s persistence, and are doing some shows around the place.

“We got back together this year and we’re doing some shows. We reformed after I pushed and pushed the point with the boys last year. A few of us hadn’t even spoken for a decade. It took about 150 text messages before I finally got one back. I’m very persistent,” he laughs.

“We’re back together to pay homage to our initial success of Imaginate and Garage Mahal. We had these huge records and then the band just split straight away so we’re going back to the original four guys up the front, all singing, all playing thing. It feels like the first time we ever played these songs right. As a singer in the band, Tim and I share the load a lot, so it’s actually quite a cushy gig for me, for a change.”

But what happened to Taxiride, who formed in 1997 and rose to fame in 1999? Jason speaks candidly about the band’s rapid rise and demise.

“It just got too big too quick. We lost control; lost grip and fell off. There were a lot of people in our ears, but now all of those people are gone and it’s time for us to get back together and go back to pre-success and do it because we want to do it,” he says, earnestly and with a hint of sadness in his voice.

“Watson and I get along really well now, whereas we didn’t before. I think growing up has helped us a lot. I wanted to get back together because I wanted to hear him singing next to me again. He’s got a fabulous voice.”

In the meantime, in between reforming with Taxiride and organising shows together, Jason will also be churning out more singles which is no mean feat in itself.

“I wrote ‘Quicksand’ in an afternoon, but then there’s the recording of it and adding to it,” he says. “There’s a lot more that goes into a week than the three minute video! But I’m not finding it as easy for the second single because I set a really high benchmark with ‘Quicksand’ and I want to go up from there. I don’t want to plateau. I’m trying to nail it.

“I’m doing it completely from scratch. I’m a male. One thing at a time, mate!” he laughs. “I can’t organise my time that well. I’ll just do one at a time. I don’t have ideas or anything for the next one, I’m just trying to reach each finish line.”

Check out ‘Quicksand’ below and stay tuned for the next installment in The Jason Singh Project.