This is a spoiler-free review

Quite simply, The Force Awakens is the best of the Star Wars films.

It easily surpasses the prequel trilogy. Remember the great anticipation heralding the arrival of The Phantom Menace in 1999 (comparable only to the hype surrounding this latest outing)? And the let down that followed? Episodes I to III were just a bit of mess, caught between between taking itself too seriously and Jar Jar Binks style silliness, while also getting carried away with CGI trickery. Besides, the thrill of the adventure was rather diminished knowing how it would all pan out in the end.

J. J. Abrams’ Episode VII is indeed a re-awakening, matching the thrill of the original films, and even slightly surpassing them with its slick style. However, the new film’s success owes a huge debt to these predecessors, borrowing many of its best elements from them, particularly the first Star Wars movie (later rebadged as A New Hope). Abrams understands what made the franchise work so well in the first place: a heady mix of unbridled adventure, technical wonder, gentle comedy and simple story telling (Lucas somehow forgot much of this with the prequels). So while The Force Awakens might not be the most original of films, it is hugely satisfying.

Even so, there are some great surprises packed in, and enough back-story that remains clouded to keep audiences intrigued throughout the film and eagerly waiting the next one. There are also some wonderful references to the earlier episodes. The introduction of the Millennium Falcon, for instance, is one of the best moments in the film. 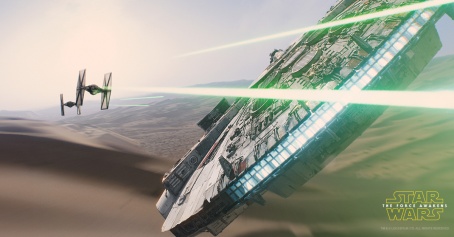 And then there are those familiar characters. While Carrie Fisher and Mark Hamill are underused, Harrison Ford’s Han Solo is at the heart of the film. Solo is still a loveable rogue, but Ford brings a new gravitas to the role in the character’s best outing in the series. Meanwhile, Chewbacca (with Peter Mayhew still in the suit) is given some of the best comic moments in the film.

But it’s not all nostalgia, with some fine new characters added to the Star Wars universe. With no more Darth Vader, there are some very big boots to fill in the bad guy department. The Kylo Ren character works because it’s not just a reboot; in contrast to the cold, methodical villains we are used to, Ren is full of rage, prone to violent tantrums when things don’t go his way. We also get a Nazi-style commander in General Hux (with a rally in the fashion of Nuremburg) and an emaciated evil Emperor figure in Supreme Leader Snoke. Although, played by Andy Serkis, this did come across like a more sinister version of Gollum.

We also have a range of interesting characters among the ranks of the good guys. With the franchise’s focus on the notion of redemption, John Boyega’s Finn, a Stormtrooper with a conscience, works nicely. Daisy Ridley also makes excellent work of Rey, who we see on the path to becoming the true hero of the new trilogy. The performances of the newcomers are consistently strong, no painful Hayden Christensen style speeches about sand to cringe about here.

The Force Awakens is not a perfect film. There are obvious plot holes, with more than enough coincidences needed for the story to work. But watching it is just too much fun for any of this to matter. And like the original films, it’s made to be enjoyed over and over again.

When Disney acquired Star Wars, it could have gone either way. The first outing has been a resounding success, leaving audiences in anticipation of Episode VIII (to be released in May 2017). In the meantime, we have Rogue One: A Star Wars Story due for release this time next year (set in the lead up to Episode IV). Let’s hope that Disney doesn’t ruin this initial triumph through saturation – now that would be a path to the Dark Side.