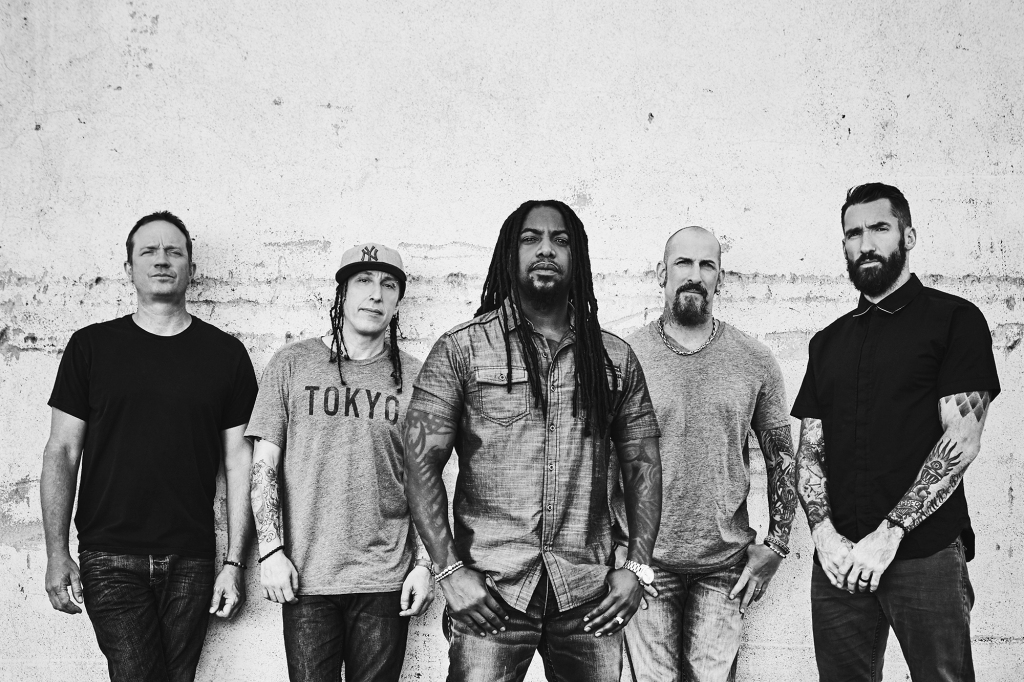 After a six year absence, Atlanta hardcore rock group Sevendust are coming back to Australia to play a heap of dates throughout March. 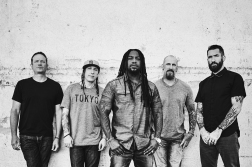 We spoke to Lajon over the phone while he was chilling with his newborn baby Kingston, and he told us how thrilled he was to be coming back to our shores.

“I am laying beside my newborn baby boy. He’s looking at me, smiling. It’s very cool. Normally I’d be on tour right now so I’m glad I scheduled it so I could deliver him and spend some time with him. The next date we do will be Australia and I cannot wait to get back there,” he enthuses.

“My baby will be staying back with mommy for this tour, but hopefully next time he will come. If we do it the right way, with this new management, I’ll be looking for a bit of a residency in Australia.”

Lajon absolutely loves Australia and is looking forward to touring on the back of their recent LP release Kill the Flaw.

“The place you live in is incredibly beautiful; it’s amazing: the people – I don’t say fans – our family. I still have chill-bumps from six years ago. I still remember it like it was yesterday. From Brisbane to Sydney to Adelaide to Melbourne, everywhere was the most inviting and contagious place insofar as the energy,” he says.

“It’s something I look forward to and I can’t wait to get back to. I hate that it’s been this long, but sometimes things are out of our hands and when people ask why we haven’t been back to Australia, it’s not because we don’t want to go! Believe me, why wouldn’t we want to go to the most beautiful place in the world? The people are jammin’ and the energy is a whole different type of energy when you go over there for the music. I can’t wait. I dream about it.

“When we get there, we’re going to bring it. I want to let everyone know to get ready for a magical experience. We’re going to make up for lost time.”

The genuinely charming and charismatic vocalist continues to talk about how much he loved his time over here on their last tour and promises this time will be even better.

“Last time we were there, we got off the airplane and there were kids there waiting for us! I mean, are you kidding me? That lets you know something’s good. How dare us not be able to get back there for six years due to people in our organisation? Because I cannot wait to get there,” Lajon insists.

“Performing on the stage is incredible, but then to be able to talk to people afterwards and have them tell us stories about the reason they like Sevendust, and how long they’ve listened to us – that stuff is amazing. Hearing their stories and finding out what each of them likes and does, that’s the stuff I like to hear. When we get there, we’re going to bring it. I want to let everyone know to get ready for a magical experience. We’re going to make up for lost time.”

Playing at The Gov on Monday March 14, there are a range of packages available if you’re keen to catch Sevendust, some of those offering a meet and greet.

“I don’t know a whole lot about the meet and greet packages but I know we’ll get to hang out with you guys!” Lajon laughs. “In America, we have tour bus hangs where you get to come on the bus and hang out with us, sometimes it’s backstage or sound check, but whatever it is, we’ll make it something exciting for everyone.”

Kill The Flaw has been released to critical acclaim, but it’s the single ‘Thank You’ in particular that has sparked some prestigious accolades.

Nominated for a Grammy Award in the category of Best Metal Performance, Lajon says it’s one of his favourites to play live.

“I love playing the single ‘Thank You’ live, but I also love playing ‘Not Today’ and when we bring that down under, we will jam out for you guys. We’ll bringing that and several songs you haven’t heard. I just can’t wait to express what we love to do the most on stage,” he says.

“Can you believe we got a Grammy nomination? Even if we don’t win, we got a nomination and they can never take that away from us. We’ve done this for a long time. We never know what’s going to happen with an album. No matter if it sold one album, or three people liked it, Sevendust are going to continue no matter what.”

Fellow metal band, Ghost, won the Grammy, but Sevendust had a great time at the Grammys and were pleased to be nominated for a single off an album they are very proud of.

The difference between Kill The Flaw and past recordings, according to Lajon, is the time they took with it.

“We took a year away and took our time with this album. We did the acoustic album and we were excited and ready to get back into the studio and plug in electric. We went in fresh, and we didn’t have any music. We wanted to just be the band that we are, and we got a lot of the people out of our organisation that needed to be out for us to be happy and focused,” he says.

“That made us more comfortable and relaxed and we were able to go and be dads, and husbands to our wives and then go back and do our music; not be away for two years and then come back for a week, only to be gone again.”

Lajon is pretty insistent the gap between tours will never be so far again, but just in case, you should grab your tickets to see them at The Gov, supported by Zelorage, through the venue or Metropolis Touring.