For as long as I can remember, it seems that Joni Mitchell’s voice and her music have always had a polarising effect on people.

It is hard to sit on the fence when assessing her work – you either love it and readily immerse yourself in its lyrical richness and (sometimes) disorienting vocal quirks, or you can’t stand it and summarily dismiss her vocal style as tuneless note bending and her lyrics indulgent self-absorption. 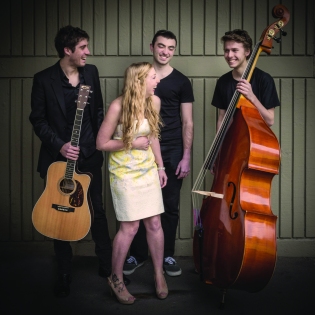 There has, in my experience, never appeared to be any middle ground conceded between these two schools of thought.

Deborah Brennan admits to being in the latter camp for much of her younger years – changing channels on the radio when Mitchell’s songs got a rare airing, and generally avoiding having to acknowledge the Canadian’s existence wherever possible.

Thankfully, there came a time when Brennan found she had to reassess Joni, and she soon came to appreciate the raw honesty and great song-craft contained within the body of Mitchell musical canon.

A Case Of You: The Music Of Joni Mitchell features a selection of the most well-known Mitchell songs, mostly from her seventies output, and weaves them together through a narrative that tracks Brennan’s journey into finding the stories behind these songs and the connections she found between them and her own experiences and self-discoveries.

Highlights of this performance were Brennan’s sensitive readings of ‘Carey’, ‘River’ and a wonderful arrangement of the show’s title tune ‘A Case Of You’. Crowd pleasing versions of ‘Help Me’, ‘Both Sides Now’ and ‘Big Yellow Taxi’ also drew an appreciative heartfelt response from the audience.

The narrative links between, and at times during, the songs were never indulgent and were interesting and insightful, placing the songs into the context of the songwriter’s life and also explaining how they connect to the zeitgeist of her listeners’ own lives and times.

Trying to sing like Joni, just like trying to sing like Tom Waits or Van Morrison, is nigh on impossible, and Brennan did try to emulate Mitchell’s highwire vocal calisthenics at times, but lost power at the moments of highest vocal tension.  Luckily these moments were rare, and she was at her best when she simply trusted her own singing style and subsequently imbued the songs with an affecting sense of emotional honesty. She has a pure voice and is also a talented pianist – and her band were moved to deservedly applaud her on a number of occasions. Her trio of musicians: Max Garcia-Underwood, Max Ziliotto and Louis ‘Max’ Cann, all provided tasteful and sympathetic musical support throughout the all too short hour-long performance.

This show is travelling to Edinburgh in August and then to Melbourne in September. If you know anyone in either location, tell them they should go and see this show; or if you are travelling to one of these places yourself, give in to your own ‘urge for going’ and experience the raw emotional power of this performance.