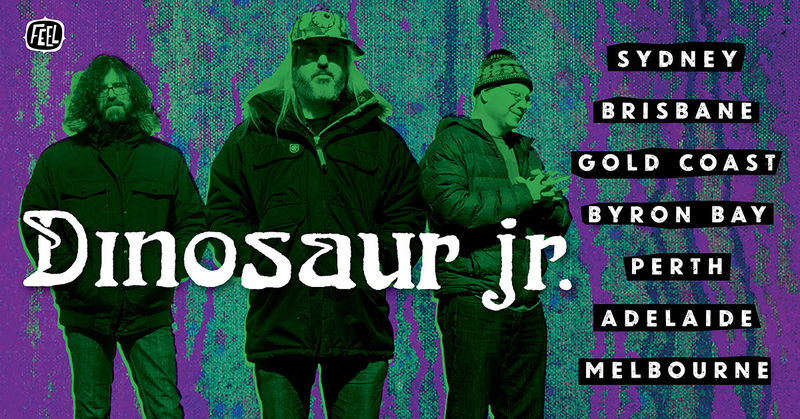 Dinosaur Jr stormed the stage at The Gov last night, proving they are still one of the best alternative rock bands around. Performing in their original founding member line-up, consisting of singer-guitarist J. Mascis, singer-guitarist Lou Barlow and drummer Murph, they performed old and new hits from their vast discography.

Revelers were ushered in from the inclement weather by the sounds of support act Luluc. The folk duo strummed away under the blue light, their hair being blown by the fan. Lead singer Zoe Randell’s voice echoed Joan Baez on their track ‘Reverie on Norfolk Street’. Hailing from Melbourne but based in New York, Luluc were last in Adelaide supporting Jose Gonzalez. Recently they have toured in the UK with Dinosaur Jr and told the crowd how honoured they were to be supporting the indie greats. Throughout their set Randell and her compadre Steve Hassett on guitar and backup vocals switched it up from acoustic to electric and keys to double electric guitars.  They hit their peak with second album Passerby opener ‘Small Window’, both flexing their electric guitar prowess. Closing with a cover Bowie’s ‘Quicksand’ they set a great mood for the night.

The crowd was thick by the time Dino’s sound check was over and the OGs entered the stage. Mascis’ almost white hair cascaded down his face as the band started strong and hard with “The Lung” from 1987’s You’re Living All Over Me. Mascis’ meticulous tuning showed how much of a perfectionist he is: he re-tuned and tweaked his guitar after every song during their hour-long set.

The sound was amazingly deafening, blasting out from numerous amplifiers which took up the vast majority of the stage. They followed up with ‘Goin Down’ from their latest album Give A Glimpse of What Yer Not. Barlow, ever the exuberant guitarist, head-banged his mop of curls with the energy of a young rocker. In their grungy, instrumental moments you could really get lost in the wall of sound – in a good way. The obligatory weed smell wafted through the crowd and Mascis sipped on Powerade in between songs.

The guitar build-up of ‘Love Is…’ was followed by ‘Watch The Corners’. Mascis’ distinctively world-weary drawl almost drowned out by the bone crushing guitars resounding out to the increasingly active crowd. A mosh-pit was formed. By the time they played fan-favourite ‘Feel the Pain’ from 1994’s Without A Sound the crowd was frenzied to the point of crowd-surfing. Mascis’ unfazed expression as some members were escorted out was priceless. He was a man of few words.

After playing a few more tracks from their new album they played a blistering rendition of ‘I Walk For Miles’. Barlow and Mascis’ guitar noodling was enough to put any aficionado into a trance. They truly soared during the seven minute track. Despite their lack of banter (not that you would expect it from Mascis), you could feel a real synchronisation with the trailblazing band members as they jammed for ten minutes and promptly exited the stage.

Three lots of slow claps enticed Dino back where Barlow took requests from the crowd ending with a couple of tracks from the 80’s, ‘Freak Scene’ and ‘Gargoyle’.

Dinosaur Jr showed us they’re not slowing down and unlikely to become extinct anytime soon.