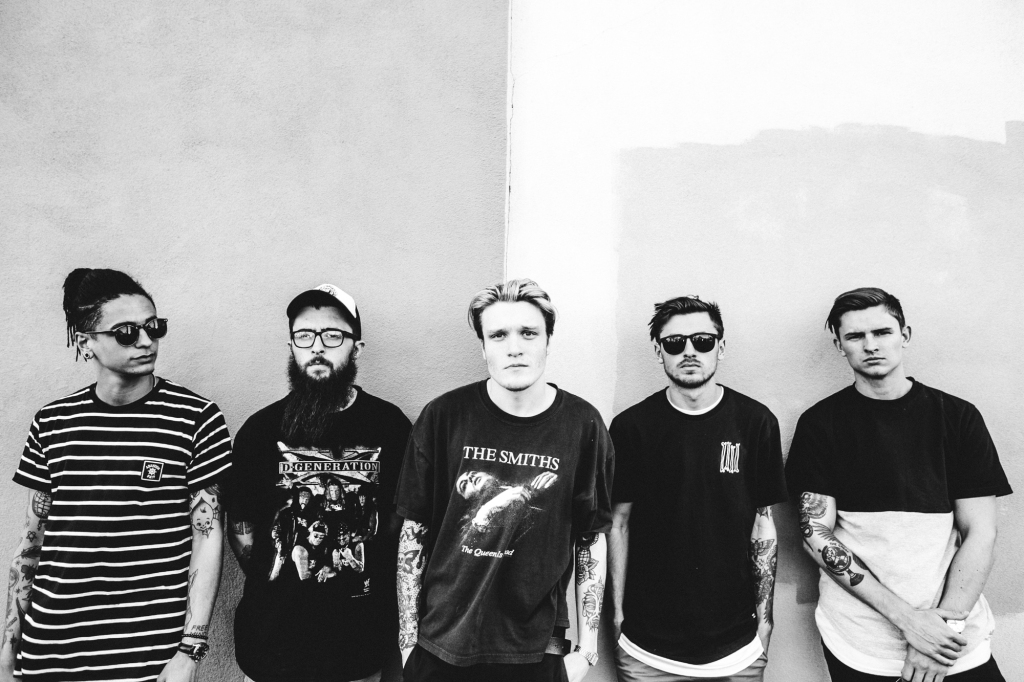 Neck Deep are leading the charge in new-wave pop-punk, following the steps of heavyweights Blink 182, A Day To Remember and of course, All Time Low. On Thursday 26th it was announced that All Time Low, Neck Deep and The Maine will be coming to Australia to play a massive pop-punk juggernaut tour.

We spoke to Neck Deep vocalist, Ben Barlow while the band was on a day off before they performed at Wembley Arena on the massive UK tour supporting A Day To Remember with New Found Glory and Moose Blood. Two years ago the band supported All Time Low in this very arena.

“I almost know what to expect this time. I think within two years we’ve shown a lot of progress and the crowd response will be even better. But you never know what to expect. I hope I’ll compose myself a little bit more this time. My mum’s going to be there, my girlfriend’s going to be there, that’s probably what I fear the most. When I know any relative or loved one is there. That makes it so much worse. I don’t mind staring out to a thousand people, but if one of those people is my mum it’s like ‘holy shit!’” Ben laughs.

A Day To Remember, vocalist Jeremy McKinnon produced and does guest vocals on Neck Deep’s latest album Life’s Not Out To Get You. Unfortunately for fans, they are yet to do a guest vocal spot live.

“We haven’t asked him to be fair. The main thing is, I know Jeremy isn’t the biggest fan of guest spots anyway, our guest spot performance (on Kali Ma) happened really organically. We each said ‘I don’t really know if I want to a guest spot on this record’ and it kind of just happened. We didn’t ask him to do it, we didn’t expect him to do it.”

“Also, we never asked him to do it this tour because we don’t want to break the illusion, do you know what I mean? When A Day To Remember walks on stage all the fans they’re going to wild because it’s the first time they get a peek of their idols. We don’t want to ruin that suspense of them first walking on stage.”

Neck Deep will be touring Australia nationally with All Time Low and The Maine. However, last time they were in Australia they did a co-headlining tour performing with State Champs and performing a massive set with numerous songs off their new album. In May 2017 the new album might not be out, but that doesn’t rule out hearing new material live.

“Well, we’re going to record the album after this tour, pretty much. In the next two or three weeks, we’re going to head out to LA and record it. The record probably won’t be out by May, but, MAYBE, maybe as a little surprise, if we’re feeling particularly generous and if we’re feeling confident in a song or whatever. Who knows, it’s tough to say at this point I think, there is a possibility that maybe there is a new song ready for everybody in Australia. I wouldn’t completely rule it out at this point.”

Life’s Not Out To Get You has been out for a year and a half, the band has toured the album relentlessly, after all this time and thousands of times playing the songs, Ben has unexpected favourites.

“One of my favourite songs off the record generally is ‘I Hope This Comes Back To Haunt You’, I fucking love playing that song live. You know, it’s not one of the biggest songs on the record, compared to ‘Gold Steps’ or ‘Kali Ma’, ‘December’, something like that. But in my eyes, it’s one of my favourites off the record. ‘Rock Bottom’ goes down really, really well. I don’t think we played that last time we were in Australia, but we’ve been playing it on tours.”

“It’s getting hard now to pick a setlist of all of our best songs, with a good mix of all our previous releases. It’s hard man, before this tour we were really fucking struggling, we were all getting really bummed out about some of the songs we had to cut. We try our best to put songs in that people want to hear, at least we think people want to hear. It’s tough, but the ones we don’t really enjoy playing we just don’t play” Ben laughs.

Neck Deep have teased the new album, confirming they are recording in 2017 and are changing things up with a few surprises that fans might not expect. They know where the roots of Neck Deep lie, however, things are getting a bit more serious.

“I think there’s a balance. For ourselves and for the fans. We don’t want to reinvent the wheel and write a crazy outlandish record or completely change style and genre. Because that’s not why people love Neck Deep, people love Neck Deep because we’re a pop punk band and we play pretty fast, energetic, catchy music. In that respect, in what makes Neck Deep, Neck Deep, that won’t change. Maybe there might be a little something here and there, but you know, we don’t want to write the same record twice. We don’t want to exhaust and wear out the same thing over and over again.”

“We’ve grown as musicians and people, there’s a lot more to us than farting around and having a laugh. There comes a time, we’ve all been through shit and we’ve all experienced things, we’re not always taking the piss out of everything. There comes a time where we can actually take things seriously believe it or not. You want to satisfy all those creative urges. Without pushing the boat out too far, we’ve found the right balance of where we’re going to be out now.”

A year after the release of the album, Neck Deep did a bold moving releasing two versions of their hit ‘December’, one full band and one acoustic as singles. These featured guest appearances from some of Ben’s idols growing up, Blink 182’s, Mark Hoppus and Dashboard Confessional’s, Chris Carrabba.

“Originally that song was a full band song and we didn’t know where it was going and we were struggling writing it. So we stripped it back and tried to write it acoustically, which seemed to make a little more sense. When it was done we were like ‘fuck yeah, this song is sick, why don’t we try playing it back as a full band version’. I personally prefer the full band version, that’s the good thing, everybody has their own favourite. It just worked as a two-version song. I don’t know who’s idea it was, might have even come from management who thought ‘let’s release both these songs as singles’. At first, we thought that was a bold move but I think it really worked out with the guests.”

“I really don’t know which version people prefer more, I think it’s pretty much down the middle. We like playing the full band version, I think we play it live so it keeps the energy up and we don’t want it to lull too much, especially if we’re playing a short set. I’m sure we’ll get round to doing the acoustic version live too.”

All Time Low Australian Tour #atlaus2017
May 2017
with Neck Deep and The Maine
Presented by Destroy All Lines, Chugg Entertainment and Hysteria Mag