Manchester by the Sea, written and directed by Kenneth Lonergan, tells the story of Lee Chandler (Casey Affleck) who returns to his hometown in the wake of his brother’s death, only to discover than he has been given guardianship of his teenage nephew, Patrick (Lucas Hedges).

At the beginning of the film, we are introduced to detached introvert Lee who resides in Boston, earning a thankless living as a handy man. His brutish demeanour consistently lands him in hot water, and we are left to question if there are any endearing features of his character.

Yet, upon learning of his brother’s death, Lee’s vulnerabilities are revealed through flashbacks to his earlier life with his brother and nephew in the coastal town.

When Lee begrudgingly agrees to take custody of Patrick, the somewhat already fractured relationship between uncle and nephew becomes increasingly strained, as Lee has to parent a broken young man on the verge on adulthood while facing his own bitter demons in the process. 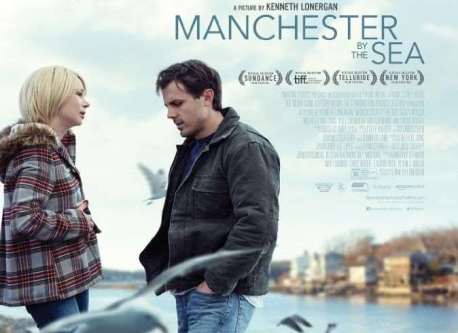 Casey Affleck, who was awarded the Golden Globe for his lead acting performance in this role, is nothing short of mesmerising as the tormented Lee. He envelops the character, and beautifully captures the many layers of the role. When Affleck is on the screen, it’s hard not to be completely transfixed by what is essentially an understated performance.

Michelle Williams is also impressive as Lee’s ex-wife, Randi. A far cry from her Dawson’s Creek days, Williams has proven repeatedly what a formidable talent she is, and her performance in this film is no exception.

Another key player in the film is the tranquillity of the stunning Massachusetts backdrop. The calm stillness of the film’s setting contrasts greatly with the turbulent nature of the film’s relationships.

The beauty of Lonergan’s screenplay is that there are moments when, watching the events unfold, you are heartbroken, and then in the next instant, you’ll be struck by awkward laughter. Manchester by the Sea is incredibly raw, possessing a realism and believability that makes it so endearing. The film’s conclusion might not be what you expect but, in line with the rest of the film, we believe it wholeheartedly.

Hopefully you purchased a bulk pack of Kleenex because, just like last week’s reviewed film Lion, Manchester by the Sea takes you on an incredibly emotional journey. Stirring performances and a tenderly poignant screenplay make this another must-see of the awards season.

Manchester by the Sea is in theatres on February 2nd.