Choosing a setlist showcasing a career that spans five decades to fit into your one-hour Fringe show time allocation would be a hard task for any established artist, and for Renee Geyer that certainly proved to be the case.

Hence, unfortunately, no Stares & Whispers or If Loving You Is Wrong (I Don’t Want To Be Right). No Be There In The Morning or Tender Hooks. But in the end it did not really matter because what she and her band did deliver was all class.

Kicking off proceedings with her version of B.B. King’s The Thrill Is Gone, as she did on 1978’s Blues License album, proved to be a great way to start the show and for her to warm up her trademark husky blues growl.

Her band were right on the money from the opening note, and the interaction between Geyer and her musicians was fascinating to observe right throughout the performance.

She directs musicians with gestures and eye contact and they readily respond within a microsecond to change the tempo, or add a drum fill, a cascading keyboard run, or a sudden drop into a beat of silence.

Charlie Owen, one of this country’s greatest guitarists, was given the sign to ignite into solos on a number of occasions much to the delight of the enrapt audience, and he too was given firm cues as to what notes should be played, and when, by his boss.

Terrific versions of Peace & Understanding and Difficult Woman were mesmerising in their funky virtuosity, and fans were ecstatic when the band broke into one of her signature tunes, Heading In The Right Direction, which allowed us all to sing along in what was, at first, until Geyer berated us, a tentative voice but then, progressively with her encouragement, a more confident, celebratory choral accompaniment.

It has to be said that Geyer’s voice is not the smooth and powerful instrument it once was, and these days she carefully chooses the rare moments when she goes for those spine-tingling notes of yore, but she left no doubt that she still has the ability to inhabit a song convincingly and affectingly.

There were some lighter moments between numbers, such as when Geyer gently mocked a fan who gave her flowers in a champagne glass vase, saying she was not really a flower girl but that she really liked jewellery; and a self-deprecatory reminiscence describing her abject closed-eye fear of falling off the stages in the Countdown studios being mistaken as impassioned, soulful reverie. 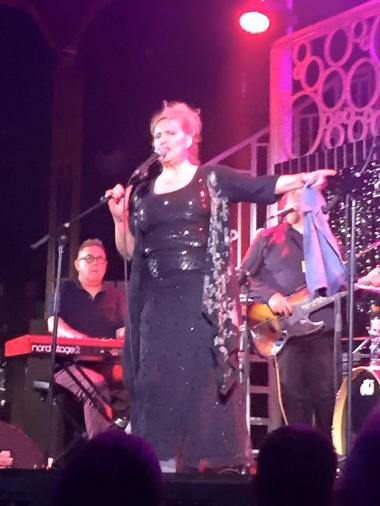 Geyer’s short set also had room for staples like Shakey Ground, Jimmy Cliff’s Limbo, and the closing pairing of James Brown’s It’s A Man’s Man’s World (in which she defiantly changed the words to: ‘This is a man’s world / But it would be nothing without a woman like me…‘), with a rollicking Say I Love You that had people up and dancing in the aisles.

So, my only complaint would be that just an hour of Renee proved to be too short a time in her company. This crowd would have happily lapped up another hour or so, if they could have.

The night was a terrific reminder and affirmation of Renee Geyer’s talent, and this short performance will be savoured in memories, and will have to tide us all over, until she can get back to Adelaide with her band for a longer set – hopefully sometime in the not too distant future.

Renee Geyer performed in the Spiegeltent in The Garden Of Unearthly Delights, on Saturday 25 February.

P.S. – Note to any aspiring songwriters out there. Renee asked for songwriters to send her songs she can consider using on her next album. If you think you have a song that would be perfect for her to record, get in touch with her via her website.