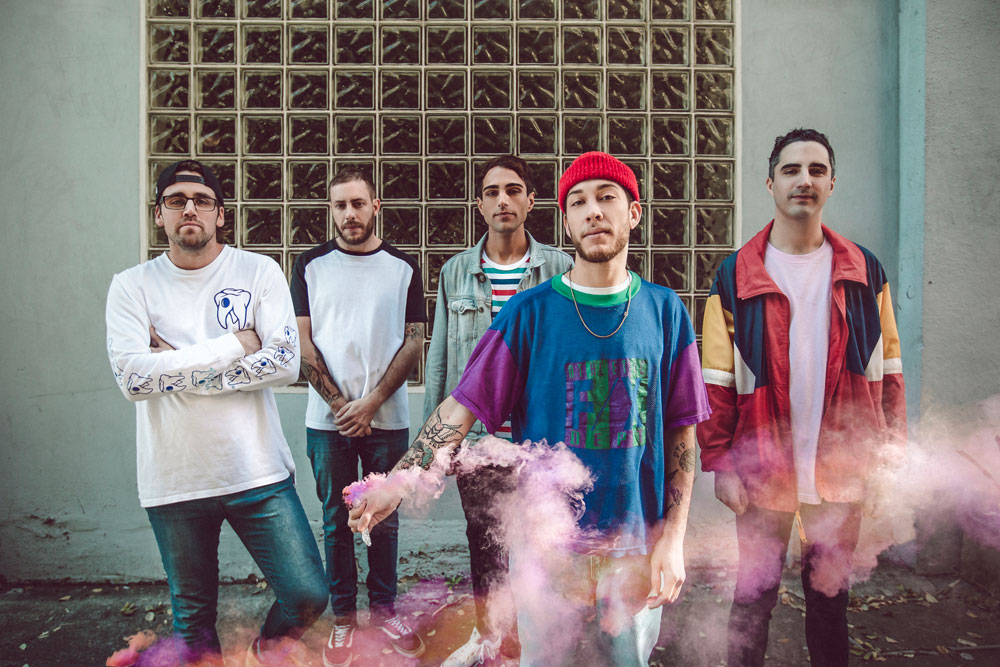 Sydney’s Hellions have had a massive year following the release of their latest album Opera Oblivia in August 2016. Since then the album debuted at #4 on the ARIA Album Chart, they landed Triple J Feature Album and were nominated for an ARIA Award for Best Hard Rock/Heavy Metal Album in 2016.

On a train to the western suburbs of Sydney, Hellions drummer, Anthony Caruso chats to The Upside News about the upcoming national tour and the aftermath of their best album to date.

Upside: So it’s been about 9 months since the release of Opera Oblivia, it’s been a massive year for you guys, you’ve toured the world with the album, how do you think the album launch and tour has gone overall?

Anthony: It’s been very overwhelming, you never know what to expect when you’re about to release a record. It’s something that you put so much of your energy into, it’s very nerve-wracking, but it has been so positive and so much more than we ever could have hoped for. I’d give it a solid 10/10 on my behalf.

Upside: Is there one particular highlight you’ve had since the album release?

Anthony: Being nominated for an ARIA was pretty cool, the Triple J feature album stuff, all the things that we didn’t think would happen for us at all, yet alone now, all of that is so insane. I think that my absolute favourite part of all of this, is having people be at shows and singing the songs with us.

Upside: It’s nice to see Hellions have been accepted into the more mainstream, commercial, Triple J side of things, it’s getting the attention it deserves, which is great for you guys but also the industry.

Anthony: Yeah, it’s so unexpected. It was something that we didn’t really think would be on the cards. Even in a few years, yet alone now. We’re very humbled that that has happened, they’ve been so supportive of us and it seems like the listeners of Triple J have been very open and it’s going down quite well.

Upside: I’ve noticed in Sydney you’re performing Opera Oblivia and Indian Summer in full, which is pretty insane. Have you played all the new songs live yet or will Sydney be your first time?

Anthony: No, there’s a few songs we have never played live yet. The show that we’re putting together, it’s unlike anything we have done before. Previously it has been us getting out on stage playing songs, but now we’ve put a lot more thought into the show, what songs we want to play, how the production might be and everyone is putting in so much effort. Putting all that to use is what we’ve been waiting for and what we’ve been working towards. To do a headline tour in Australia now that the album has had it’s time to settle and people know it. This will be the first headline run since it was released. The first headline tour we did the album came out in between or towards the end. A lot of people weren’t too familiar with it.

Upside: I’ve noticed ‘Thresher’ on Spotify seems to be the complete standout of the album, even though ‘Quality Of Life’ was the first single and released a lot sooner. Is there an unexpected favourite on the album for you, or a song that just goes off live that you may not have expected to be so popular?

Anthony: The song ‘Lotus Eater’ seems to be the undercover favourite. When we play that live it seems to go down really really well. We kind of didn’t expect it. We originally put that in our set over the last few months just because we liked to play it. Didn’t really have much of an idea of how it would go down, I just don’t seem to generally, but it seems to be a favourite. ‘24’ as well, seems to be one of the favourites as well. When we play that live it feels like everyone is in unison, it feels really good to play.

Upside: That’s interesting to hear because ‘Lotus Eater’ was my personal favourite, and it took a few listens for it to catch on. It’s definitely grown on me and it’s the complete stand out for me.

Anthony: It’s actually one of my favourites as well. The way that song came together, it was really fun. It has a bit of a circusy type vibe to it as well. I think that came out with the way we approached the song. A little bit fun, a little bit crazy.

Upside: Now, of course, you just did Like A Version and covered Amy Shark’s ‘Adore’, great choice, sounded awesome, but also completely unexpected. How’d the band come to that decision, were you all on board?

Anthony: It kind of took a little while for what song we would actually play. We had ideas from all ends of the spectrum. A few of us are really big fans of Amy and love her music, that song in particular. We spoke about it and we were unsure, even very close to the date of doing Like A Version, we weren’t sure what to do. We played around with that song and there were 4 to 5 different versions, it was very much out of our comfort zone. If we’re going to step out of our comfort zone, do something different and really push ourselves, why not do it on live national radio? That’s how we came to the decision, let’s just do it, if it goes badly, it goes bad, if not, great!

Upside: You also did the stripped back version of ‘Thresher’, which sounded really good and seemed to be unexpectedly fitting for Hellions. I think you guys nailed that. Could we see a song similar to this in the future, a more stripped back mellow acoustic kind of thing?

Anthony: Maybe, it definitely made us think outside the box a little bit. We’ve always been quite intimidated by the idea of doing something like that. We also just wanted to use Like A Version to push ourselves and step outside of our comfort zone. We had tried doing a stripped back version of ‘Thresher’ as a full band, but it wasn’t really coming together as we had hoped. So we thought, let’s just build it again from the ground up and we’ll take it from there. So we got 2 guitars and an egg shaker and just had a go. I think it definitely made us think a little bit different as far as writing goes. I don’t think we would ever release a full record of acoustic versions of songs or anything like that. I don’t know if we would ever have an acoustic song on any record, but I think parts of that will definitely shine through in whatever we do next. Who knows, I really don’t know!

Upside: Are you currently coming to the end of this album cycle now? What are the plans after this Australian national tour?

Anthony: Somewhat, but not quite. We still plan to do a bunch more touring before we wrap this one up. We are writing at the moment, just trying to layout demos for as many songs as we possibly can. That’s the plan at the moment. I can’t really say much about the touring at this point. We don’t have plans for the record as of yet, but who knows what will happen in the next 6 months or so.

Friday 19th May – The Basement, Canberra (18+)
with Endless Heights, The Brave & Introvert

Tickets on sale Wednesday 8th February at 9am local time

Ticket/Merch Bundles
Hellions will be releasing Limited Edition merchandise and VIP options, which will launch at 10am on Tuesday 7th February.
For more info head to 24Hundred.net