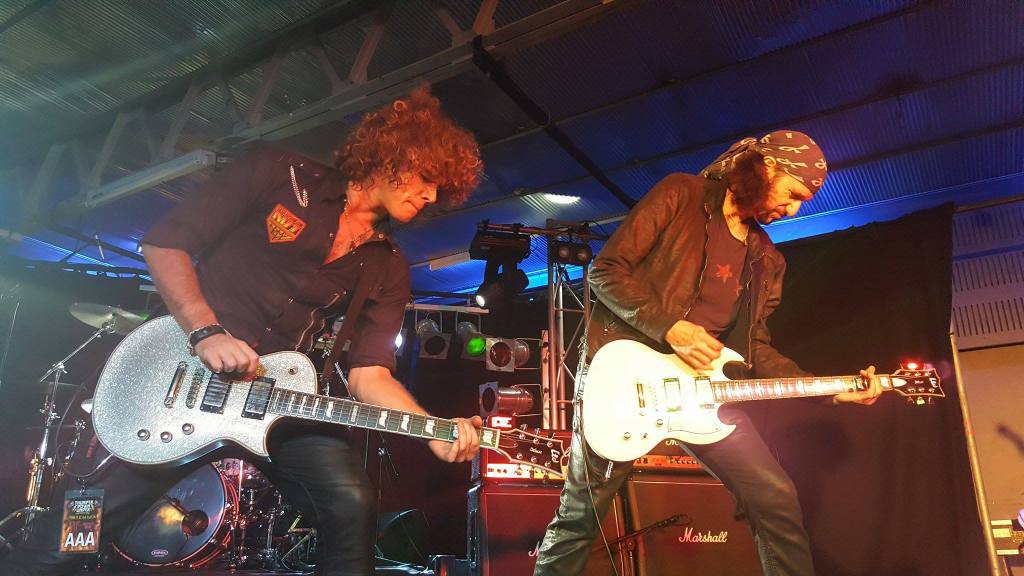 “I feel uptight on a Saturday night,” quotes Paul Stanley on KISS classic Detroit Rock City, but it was good to see that people weren’t too lazy to venture out North to the Bridgeway Hotel last weekend!

The evening kicked off with Sister’s Doll, a Western Australian glam band of brothers who are aspiring young musicians; not to mention, massive KISS fans.

The attention to detail in their performance shows their talent and hard work which is really paying off; I can’t wait to see where these brothers will be in a few more years.

Next up were Four By Fate, made up of a supergroup of excellent musicians from the east coast of USA. The group performed a fine selection of songs from the countless number of bands they have been involved with. Singer, keyboardist and guitarist Tod Howarth belted out some classic hits by Cheap Trick, Pound, KISS and Frehley’s Comet. Bassist / songwriter John Regan and Tod Howarth have worked with countless other musicians including Rolling Stones, David Lee Roth, Cheap Trick and Peter Frampton as well as being key members of Ace Frehley’s solo project Frehley’s Comet. Pat Gasperini, guitarist from Pound really took the solos from Frehley’s ‘Something’ and ‘Breakout’ to the next level and I couldn’t keep my eyes off his ever-moving fingers! The highlight of my evening was when former Skid Row drummer, Rob Affuso smashed out Skid Row’s ‘Piece of Me’.

Finally, Bruce Kulick took the stage backed by Sister’s Doll. Opening with KISS’s ‘Creatures of the Night’, they played KISS tunes of Bruce’s era with KISS and beyond. I couldn’t help thinking that Sister’s Doll must be so over the moon to be playing with one of their idols from their favourite band, not to mention travelling to New York in the middle of the year to be the backing band for Peter Criss’ last tour.

Bruce Kulick finished off the night with classic KISS hit ‘Detroit Rock City’, which was the perfect end to a fantastic evening of music. After the performance, Bruce went straight out the front to talk, sign autographs and pose for photos with many fans eager to thank him for re-visiting Adelaide on his tour.

Review and photos by Hollee Gunter