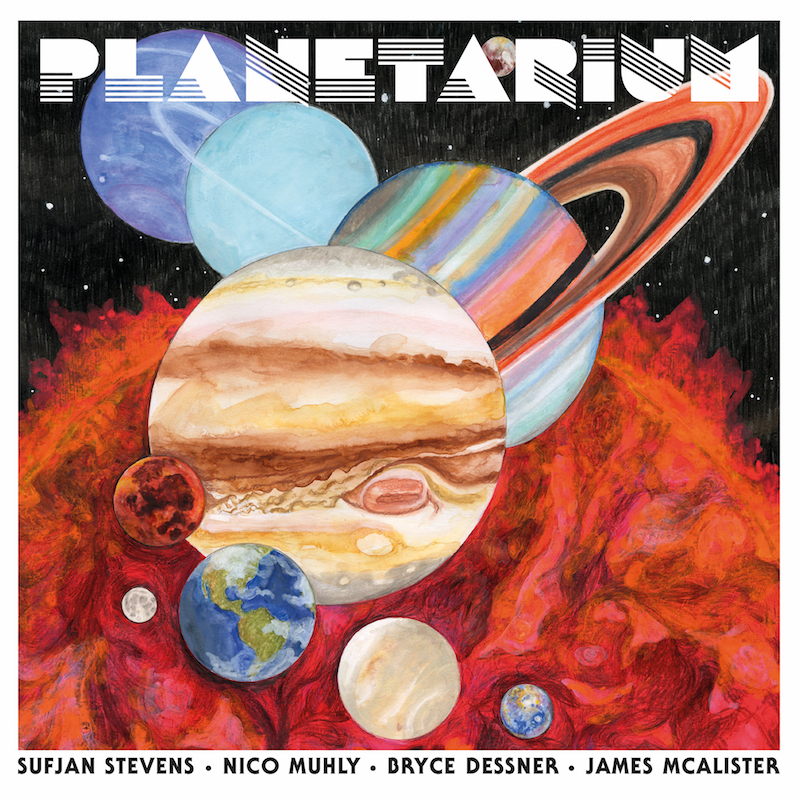 There was a time, not too many years ago, when it seemed hardly a month would go by without some new Sufjan Stevens solo or collaborative material being released in some format or other.

These days Stevens’ releases are a little more sporadic, but still as idiosyncratic in form and approach as his work has ever been.

This week sees the release of his latest project – a concept album, Planetarium, composed with help from Bryce Dessner (guitarist with The National), Nico Muhly (the prolific composer and arranger who has also worked with a diverse range of artists from Bjork, Joanna Newsom, Antony & The Johnsons, through to Usher and Icelandic musicians Jonsi & Olafur Arnalds) and James McAlister (Stevens’ long-term drummer).

Planetarium was originally an unfinished, commissioned work by Muhly for the Dutch concert hall Muziekgebouw Eindhoven, and those early compositions by the  quartet lay dormant for several years until they returned to them in 2016. Reworking the material they had initially recorded into a more cohesive whole, and building on Muhly’s original symphonic framework by adding lyrics and beats the four musicians have created a moving song-cycle around the crystal clear purity of Stevens’ vocals.

From the evidence provided in the promotional videos released in the lead-up to the album’s arrival in stores and online, this album’s beautiful lush production will please long-term fans of Stevens’ oeuvre, as well as satisfy those who have follow Dessner’s work. For the previously uninitiated, like me, it will also encourage an exploration of Nico Muhly’s vast body of previous work.

Check out the videos on YouTube and try to resist, if you can, the sublime, fragile beauty of Mercury; the dreamy electronica of Saturn; or the slow build of the horn enriched opus, Venus – it’s a safe bet you will not be able to!

Fascinating, evocative, ethereal – Planetarium is a wondrous pice of work.

Planetarium is out now on 4AD / Remote Control Records.