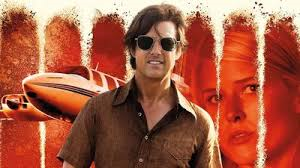 Tom Cruise’s latest offering, American Made, capitalises on the recent popularity of Netflix series Narcos. Cruise is TWA pilot Barry Seal, who gets recruited by the CIA to monitor communist activity in Central America during the 1980s. Seal is soon lured into the lucrative world of Colombian drug trafficking, under the helm of the notorious Pablo Escobar. He soon becomes known as “the gringo who always delivers”, and soon even the White House want in on the action.

Based on a true story, the tale of Barry Seal is a remarkable, and at times seemingly implausible, one. Once you’ve seen American Made, it’s hard to imagine anyone else but Cruise in the role. It is fair to say that, like many cinema-goers, I have a somewhat love/hate relationship with the infamous couch-jumper, but Cruise’s Seal is definitely a charmer. He gets himself into all sorts of scrapes, and despite his relentless quest for the cold hard greenback, we can’t help but like Seal.

American Made captures the Cold War period to a tee, with an iconic soundtrack and news footage from the Reagan years integrated into Seal’s story.   The film confronts the excesses of the eighties head on, yet doesn’t shy away from the murky reality when it all comes crashing down.

Say what you will about Cruise, this film proves he’s still got it. American Made has a little bit for everyone – plane chases, drug deals gone wrong and Cruise in a pilot’s shirt with the sleeve length perfectly placed to show off those well-maintained biceps. If you’re looking for a flick this weekend and trawling through the film titles, it’s hard to go past American Made for pure entertainment factor.