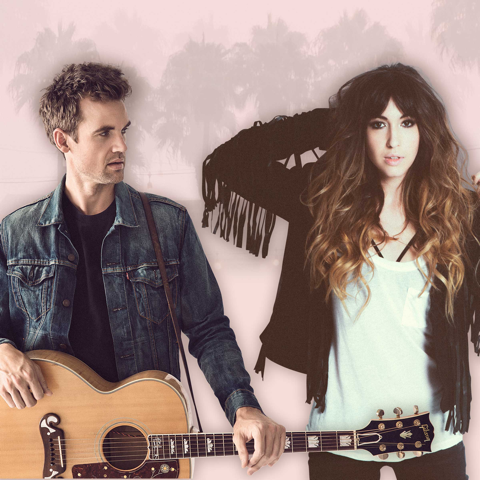 Kate Voegele is performing at The Gov on Wednesday 6 December, alongside Tyler Hilton who co-starred with her in TV series One Tree Hill.

The show will involve individual sets from both performers, but Kate says they will often team-up on songs throughout the night.

“We have a lot of fun playing off each other on stage and collaborating on each other songs,” Kate says.

“It makes it a unique experience where fans get to hear our separate songs, but in a different context than one of our individual shows.”

They had met while working on One Tree Hill, an American drama series previously airing in Australia, playing the roles of Mia Catalano and Chris Keller.

“Anyone who’s a fan of One Tree Hill will know some of our music from the television show and we love to meet fans,” Kate says.

“Even if you never watched the show, if you love fun acoustic pop-rock music and having a great time, you’ll have a blast.”

They started performing together in the United Kingdom in 2015, where they would trade-off opening the show each night.

It wasn’t long before they could no longer resist the urge to perform together and begin experimenting with combining forces on stage.

“We just decided to try and mash it up and the fans loved it, it was only a few shows into our first tour when we realized this was the best approach,” Kate says.

Originally five shows were booked for the tour, but four extras show had to be added because some of the shows have already sold out.

“I had no idea what to expect when we booked the tour, but we knew we had a bunch of fans, so we went for it,” Kate says.

“It’s always incredibly to know there are more fans out there that you weren’t aware of, it’s the coolest feeling in the world.”

With Thanksgiving just last weekend in the United States, Kate is excited for the opportunity to play in Australia for the first time.

“I’m very thankful for family and friends, it’s time to be with them before I hop on the road for a couple of weeks,” Kate says.

“I’m also really thankful for the opportunity to make music for a living and getting to travel to places like Australia to work.”

Kate says she is excited to explore all the food and coffee options in the major cities and has heard about our highly touted coffee culture.

“I’ve heard so many people talk about how great the coffee is, so I’m expecting to have withdrawals when I go back to the states.”

“Not gonna lie, being the typical American, I’m hoping to see a koala sanctuary or take a photo with a kangaroo, haha.”

Coincidentally enough, Kate is celebrating her birthday during the Brisbane show on 8 December.

“I played a show on my birthday last year, but I’ve never done it abroad, it’s like the coolest gift ever,” Kate says.

“Despite being a performer, I’m introverted, so I don’t like to make a fuss about my birthday.”

“But last year some fans brought some balloons and a cake on stage which was super sweet.”

You can still buy tickets here.