Local company NETGIGS is set to bring music to the world and, to celebrate, they’re bringing out the best of Adelaide.

Founder Joe Mac says the company is ready to take the music industry to new heights.

“This ground breaking service is shaping up to be a major disruptor in the music scene, allowing audiences to experience a live music performance from their lounge-rooms, or wherever they might be, using a mobile device,” he says.

“The advent of streaming has changed the face of music and NETGIGS is taking it one step further by delivering high definition video and audio footage of live music performances. “

And what better way to celebrate NETGIGS’ entrance onto the music industry landscape than with a gig at one of Adelaide’s favourite live music venues.

Fire at Fowler’s on August 24, from 6pm will feature some of the best local, independent music talent at iconic Fowler’s Live. 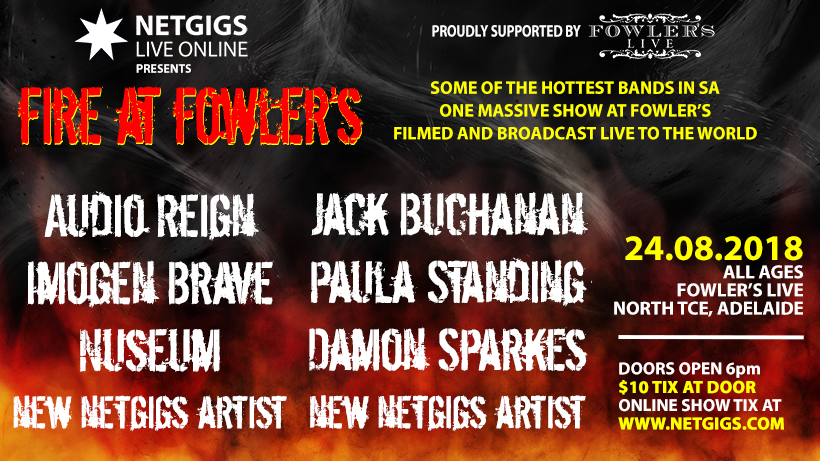 “The support from Fowler’s to get behind something new, and to instantly recognise the opportunity that NETGIGS creates for both artists, venues and the industry at large is vital,” Joe says.

Jake Fleming from headline act Audio Reign, who will debut songs from their forthcoming album at the gig, is thrilled to be involved in the official launch of a platform that supports bands.

“This NETGIGS performance gives us an awesome opportunity to showcase songs from our brand new album to a national and international audience,” Jake says.

Following several months of development, the Fowler’s gig will be the first time NETGIGS will stream directly from an authentic live venue, with viewers able to enjoy the event in real time from anywhere in the world.

Already streaming to a global audience across Australia, New Zealand, the U.S. and Europe, NETGIGS allows music-lovers to have access to both real-time and archival footage of their favourite artists, anywhere and anytime

Meanwhile, live venue audiences remain central to proceedings, attending the live shows for low door prices and going home with the novelty of a free download of the performance within two days of the event.

“So gig goers, both live and online, will be able to relive the band’s performance forever,” Joe says.

“We’re passionate about promoting independent South Australian artists and making sure musicians are given fair reward for their efforts. NETGIGS pays artists on average 500 times more than other streaming platforms.

Performances filmed at the Fowler’s gig will also be used as pre-shows when NETGIGS streams the concerts on the international stage in future, creating further opportunities for exposure for South Australian acts.

But the concert bill is not yet complete, with competition currently for two emerging SA acts to fill the final spots, so visit the artist application page (https://www.netgigs.com/artist-application/) to find out how you can be part of this ground-breaking initiative.