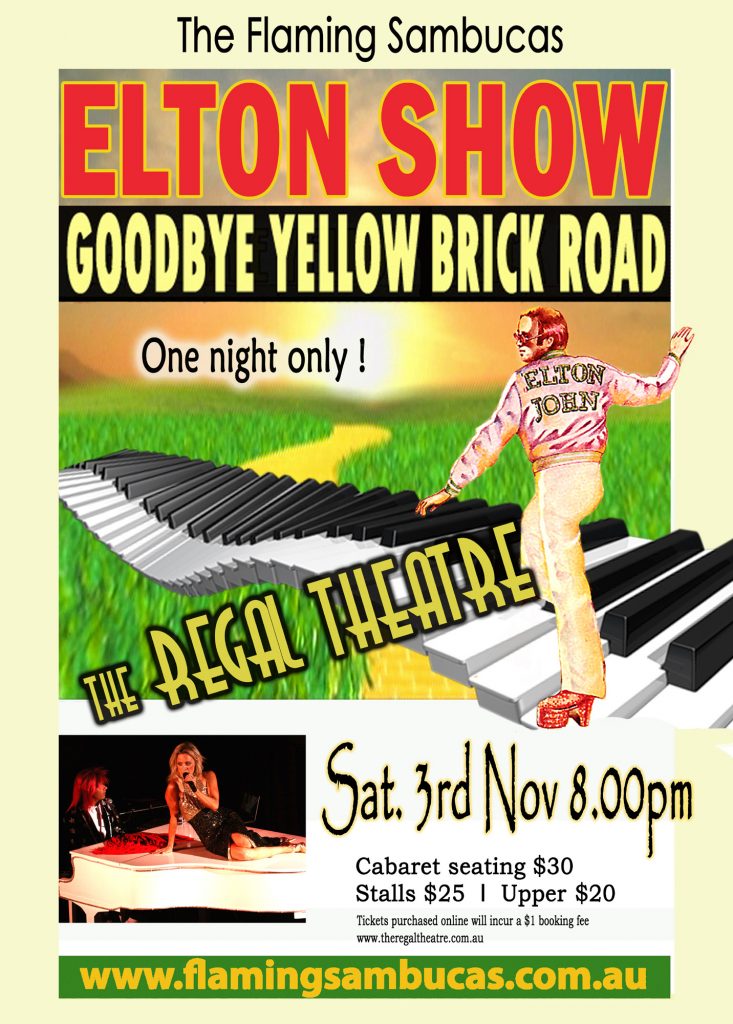 For one night only this weekend, stalwarts of the Adelaide music scene The Flaming Sambucas will pay tribute to the songs and stories of Elton John.

Showing at the Regal Theatre (275 Kensington Road, Kensington Park), Goodbye Yellow Brick Road showcases the work of the great Reggie Dwight and is a night of sparkling entertainment.

Having been in the music biz for almost 30 years, The Flaming Sambucas are one of Adelaide’s favourite party bands and have paid tribute to bands like ABBA and others, but founding member Terry Nicholas says the Elton tribute is one that is close to his heart.

“I started playing the piano when I was very young and I played in piano bars all through the 80s. I just the loved the connection with people. When I started playing, the piano, players on the radio were Elton John and Billy Joel,” Terry says.

“The Flaming Sambucas band started in 1991, and soon after, maybe about 1996, we started doing an ABBA show. We had two girls, two guys in the band and that’s actually gone onto bigger and better things, but somewhere in the middle of that, one of the agents said, ‘Can you do another show?’, and I just sort of flippantly said, ‘Well, perhaps I could do an Elton John show’.

Seven years later, Goodbye Yellow Brick Road is still wowing audiences with classics like, ‘Your Song’, ‘Crocodile Rock’, ‘Rocket Man’, ‘Can You Feel The Love Tonight’ and ‘Daniel’ taking them on a 40 year musical journey accompanied by stories from Elton’s time in the spotlight.

“It’s a storytelling show,” Terry says. “And has the video up on the screen from start to finish. We are staying faithful [to the song arrangements]. The only changes we make are because we are doing it with a full band. We share the lead vocals, so I don’t sing all the songs, the girls sing some of the songs and with that we give it the slightly female edge. These girls are the best. I’m pretty lucky to have these three girls with me.

“Elton is really the epitome of love and kindness and I guess that’s my passion to portray. Not only is he giving his music, he has done so much for the world; charity wise. He’s a good human being.”

With his passion for the music, Terry says other Elton lovers will enjoy the show just as much as he loves playing the tunes.

“I think they’re going to love the journey,” he says. “They are going to remember the early years, 70s and 80s and they will love seeing a young Elton up on the screen.