With Native Tongue, Mojo Juju has released a really important work that should come into album of the year considerations.

In an ideal world, everyone in the country should experience this material performed live: a powerful mix of the personal and the political, all packaged up in an excellent soundscape. The enthusiastic crowd that filled out Jive last night were treated to an enthralling, soulful performance from Juju and band. And with a promise to return to Adelaide in the new year, there’ll be another opportunity to experience it again soon.

Mojo Juju’s songs manage to walk a fine line. She makes bold statements about identity and inclusion, but using an intensely personal lens and drawing on the experiences of her antecedents, her material is never didactic or preachy.

The performance was genuine and often very affecting, but also a lot of fun. Juju is a charismatic presence and chatted easily with the audience throughout the gig, with a wry sense of humour punctuating the sometimes heavy subject matter of the songs. And the music is quite stunning, seamlessly mixing soul, blues, hip-hop and pop into an infectious blend that really gets the feet moving. 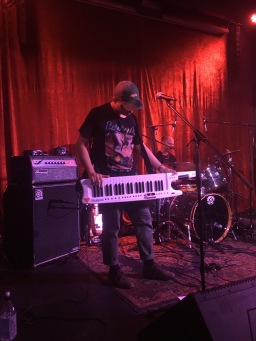 With so much going on in the construction of these pieces, Juju’s backing band of brother Steve ‘T-Bone’ Ruiz de Luzuriaga on drums and Yeo on bass (and the occasional key-tar) do a fine job rendering the material, while making good use of samples to fill out the intricacies. Meanwhile Mojo Juju has a powerful voice, and sounded just as good on stage as she does on the record.

The set opened with the title track from Native Tongue and rarely strayed from the new album. The many highlights of the night included the cool groove of ‘Something Wrong’, the uncompromising ‘Shut Your Mouth’ and the potent slow build of ‘History’. Many of the songs were augmented with personal stories by way of introduction, making for even more meaningful engagement with the material.

This was particularly the case for a trilogy of tracks in the middle of the performance, all based on the relationship between the singer’s great-grandparents. ‘1000 years’ was a notably powerful moment that concluded this section.

With the same no-bullshit attitude she brings to her songwriting, Mojo Juju finished the gig explaining how she isn’t into the affectation of the standard encore, instead just going into one final song to end things off. Closing out with the nostalgic soul vibes of ‘Don’t Stop Me Now’ (not the Queen song), the fitting vehicle for her big, stirring voice was the right way to send us all home already looking forward to that return visit.