If Ash’s set at Fowler’s Live on Wednesday night proved one thing, it is that their songs have transcended their original time to become out and out rock and roll classics.

Original trio, Tim Wheeler, Mark Hamilton and Rick McMurray, still play with the same joyous energy that they made their hallmark when they were teenagers and first riding the crest of the wave of success in the mid-nineties.

And the good news is that their latest material is all as contagiously appealing as the songs from seminal albums like 1977 and Free All Angels too.

Ash hit the stage and declared, from the outset, that their intention was going to be to pull out all stops, as clearly evidenced in a blazing first up version of True Story from their new album, Islands.

All of the material they played from this latest release was excellent – sample Confessions In The Pool, All That I Have Left and Incoming Waves online as proof – and these songs were delivered with fierce intensity at this gig and proved as good as anything they have done before.

Long term fans did not have to wait too long for old favourites to flow, and the opening chords to Kung Fu chimed out to announce the second song of the set and had the crowd in front of the stage immediately leaping and writhing around in a frenzy of exultant ecstasy.

The set kept hitting new peaks, and Tim Wheeler – classily dressed in Hawaiian shirt, in a not so subtle nod to the title of the new record, and sporting a Movember moustache that he said made him ‘feel like Magnum P.I.’ – really seemed to enjoy the reception that the smallish, but rabidly enthusiastic, crowd were giving his band.

Whilst initially deflecting requests called out from the floor, Wheeler did seem to discuss these with his bandmates and possibly file them away for later, and we all hoped he would find a way to fit some of these into what was shaping up to be an already generous setlist. 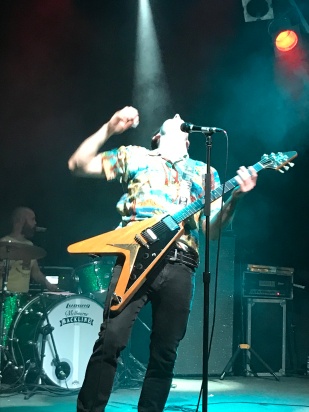 Balancing the new material brilliantly within a seemingly endless flow of classic songs such as Oh Yeah (which the crowd sang along to lustily), Goldfinger, A Life Less Ordinary, Walking Barefoot, a gorgeous rendition of their Ivor Novello award winning pop masterpiece, Shining Light, Jesus Says, the wonderful Girl From Mars, and the full on power rush of Burn Baby Burn, and even a rendition of John Williams’ Cantina Band from Star Wars squeezed in there too, Ash established themselves as being one of the very best bands of their genre, and equal to any band who had entered into Ireland’s formidable pantheon of rock and roll legends before them.

For an encore, the band chose songs that bookended their career, starting with Did Your Love Burn Out? from the new record, and finishing with Lose Control from their breakthrough album, 1977.

In between these two songs the band finally relented to the constant call from the crowd for them to play, of all things, Arcadia – one of the songs they released during 2009’s A-Z project that saw them release a new single every two weeks. Whilst it was surprising that this particular song should receive such vocal demand from local Adelaide fans – it only ever made it to number 114 on the British charts, after all – it turned out to be an inspired choice, and the band performed it with great zeal, much to the delight of those who had so fervently screamed to hear it.

The excited buzz amongst the departing fans at the end of the evening confirmed that Ash had ‘made a connection, a full-on chemical reaction’, and this show would be long treasured by all those who attended.

It was a fantastic night.