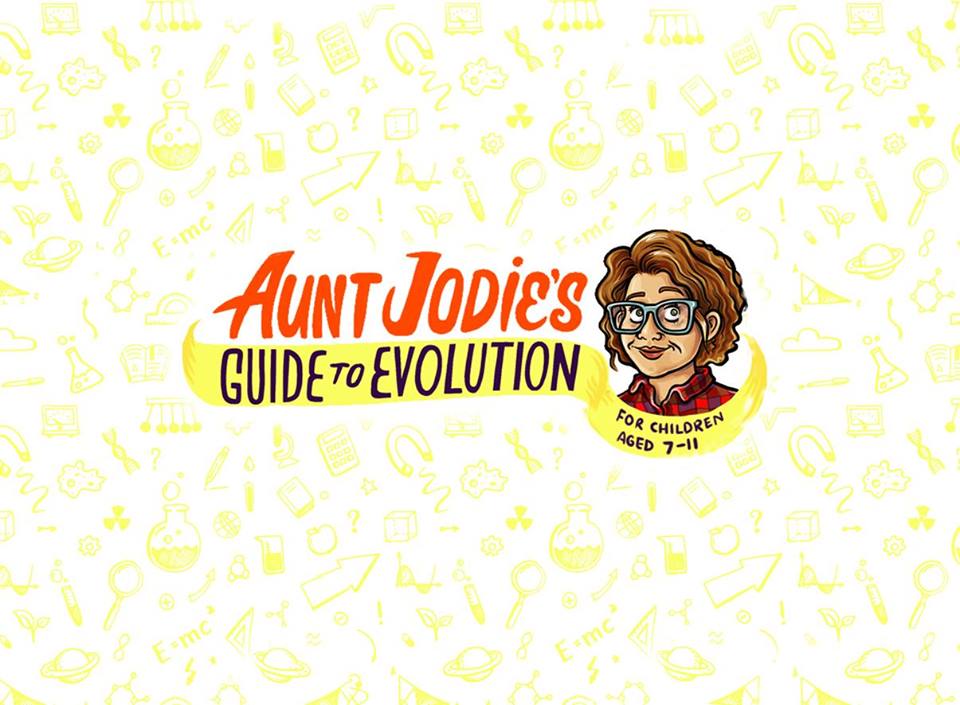 When wanting to teach her daughter about evolution, Dr Jordan Bell found there were missing links in the children’s literature space, so she created her own resource.

From this realisation, Aunt Jodie’s Guide to Evolution came to fruition and will be on its way to book shelves this year with your help.

A fun and engaging look at science, its discoveries and theories, Jordan says the book (which has been fact checked by palaeontologist Professor John Long) is aimed at school aged children.

“Aunt Jodie’s Guide to Evolution is a fun and interesting adventure into science for primary school children, teaching them the concepts that underpin the theory of evolution,” she says. “I wrote it because I think we actually wait too long to teach children about the idea of evolution.

“It’s a really fundamental concept if you want to understand anything in biology or medicine. We teach children about it when they’re 15 or16 in high school, but actually, kids in primary school have completely got the cognitive resources to understand the ideas that make up the theory of evolution. This is a better way to turn them into young citizens who have a good idea about science and the way that it interacts with the world.”

With a degree in science and a PhD in psychology, Jordan’s aim in writing the book was to create an accessible, accurate and enjoyable experience for children.

“I’ve test read it to a couple of kids and they said it was fun. They seemed to understand the concepts, and the book itself has a glossary in the back. So, for all of the scientific language that’s used, there’s a child-appropriate definition and explanation and also a pronunciation guide. So, even if parents aren’t particularly scientific, they can still flip to the back,” she says.

“Two out of the three characters in the book are female. Aunt Jodie, who is the scientist, takes her niece and nephew on science adventures. I really wanted to give young girls some good, scientific role models of women ahead of them on the path who are living and working as scientists.”

A crowdfunding campaign for Aunt Jodie’s Guide to Evolution starts today and will run for a month, with an aim to publish the book by May after reaching the target.

To be part of this this project, you can contribute to the Pozible campaign to help create this exciting book written and illustrated by a couple of impressive South Australians.

“The main purpose of the crowdfund is to publish, so people will get a copy of the book [if they donate]. If people want to contribute more to the crowdfund, there’s also an option where you can have one copy for yourself and then donate two or three copies to a school in a lower socioeconomic area,” Jordan says.

Local artist Gabriel Cunnett has provided the illustrations for the book and Jordan says he was the perfect fit for the endeavour.

“Illustration was a really big stumbling block for the book for a long time. I’ve actually had the text written for about three years, but didn’t know how to move on to finding illustrators. So, two years ago, I was at a ‘plan-your-year-goals’ event and I said: ‘Right, my goal is to move on this book. I need to find an illustrator. I’m going to start talking to everybody I know about whether they know any illustrators.’ People suggested lots of different things and I would go onto their websites and check out their portfolios and they just weren’t quite right,” she says.

“Then somebody handed me the name of a local illustrator called Gabriel Cunnett; he lives over in Croydon. When I looked at his portfolio online, he had a really great, warm, cartoony style that I thought would be really appealing to primary school-aged children, but he also had the ability to do precise, technical drawing, which for some of the scientific concepts that I wanted put across in the book, was also really important.”

And while it didn’t take long to write the book, Jordan invested plenty of time into making sure everything was accurate and age-appropriate

“The original text of the book probably took me about a month, but then I had to do a really deep dive into research. So, absolutely everything in the book is scientifically accurate. I was doing things like looking up the geological record of volcanic eruptions in the Northern Hemisphere that might trigger off one of the events that’s mentioned in the book, and researching the particular species, Plesiadapis, that is used as an example in the book,” she says. “They’re little creatures that are a bit like squirrels in terms of size and the way they live, but they were one of our actual most distant mammalian ancestors; one of the first ones that we’ve got a good fossil record of.

“Having a five-year old means I have read lots and lots and lots of kids’ books, but my experience as a clinical psychologist means I’ve got a good handle on children’s development and what they’re ready for at different stages. This is a scientifically direct book. One of the key factors of evolution is that not every creature that’s born gets to survive. That’s something that comes up in the book. But I think it’s handled in a way that’s appropriate for primary school-aged kids to read about.”

Aunt Jodie’s Guide to Evolution is a fun, adventure story for kids, but Jordan says it’s also an important scientific resource for curious kids who have a hunger for learning and discovery.

“There’s quite a few picture books available about evolution now that are aimed at younger children but they don’t really go into the detail. They just explain that changes happen over a long time but they don’t look at the mechanisms of that change. There was nothing I could see that really scientifically unpacks very accurate concepts using real-life examples actually drawn from the fossil record, but also set in a fun, adventure-style story,” she says.

“The more we can open up the world to children, particularly around scientific concepts, the more likely we are to get really engaged and intelligent citizens as they grow up, who are not going make bad decisions about things like climate change and vaccination because they actually understand where the science is coming from right from the start.”

You can keep your eye on the progress of Aunt Jodie’s Guide to Evolution written by Dr Jordan Bell at the website, join the conversation on Facebook and donate to the Pozible campaign to be part of the project.