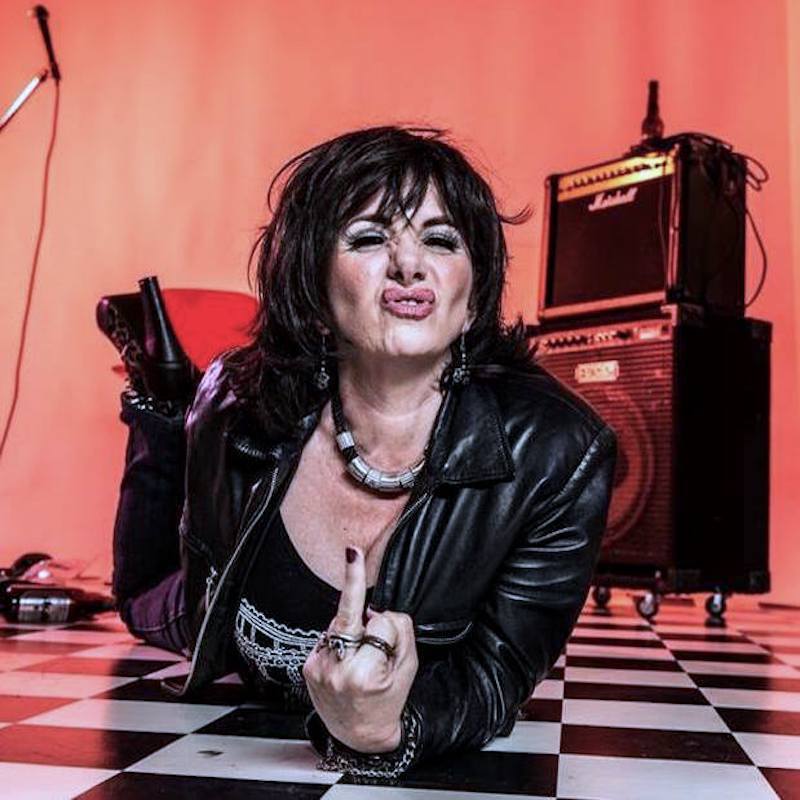 Louise McCabe’s Adelaide Fringe show The Runner Up has endured a long gestation period since she first had the inclination to explore the notion of an aspirational eighties rock band who didn’t quite have the chemistry or good fortune to make it to the top, but who were still determined to chase their dream for as long as it takes.

Originally starting out as a short ten-minute play, the reception that the original short piece generated encouraged McCabe to expand the idea into a full show length production that now allows for greater growth and development of her character and her one-hit wonder band, Cyn & The Cynthetics.

I had this character that I used to muck around with – a failed rock chick – so I turned it into a ten-minute play. I submitted it to the Hot Shorts Festival and it got in. And we won! We won the Audience Pick Award. And we won it by a mile, which was great!

It was ironic that it was The Runner Up, but we were far from the runner-up – we thrashed them!

People really responded to it because it was funny, and it was full of stuff that people could relate to, particularly baby boomers and Gen X’ers and also people who’ve watched TV talent shows as well, you know, like Australian Idol and The Voice. There’s a lot of jokes about that.

It got such good feedback that I really wanted to do it again, but I didn’t just want to do it in its ten-minute form, and I thought there was a whole lot more to the character and I wanted to explore her whole back story.

And I wanted live music. When I originally did it, I did it with a whole bunch of actors who couldn’t play and we mimed.

So, I wrote the extended version with the goal of using live music, and to use real musicians.

McCabe’s eighties’ ‘legends in their own minds’ band will feature a host of accomplished musos, some of whom will be familiar to those who frequent the Adelaide live music scene.

I came to Adelaide in October and I auditioned a bunch of people, and I picked my cast. They’re all good actors and they can also really play.

Pearl Tassell is an amazing performer. She’s a contortionist and a circus performer and a multi-instrumentalist. She plays the bass and the accordion. She’s in a lot of Adelaide bands. She’s in a pirate band! Captain Hellfire & The Wretched Brethren. They’re hilarious! So she is not only a really good musician – she trained as a bass player, and she trained overseas in America – but she is also a really great performer. She’s really dynamic.

The guy who is the lead guitarist is Jai Caferella, an Adelaide songwriter. He’s won awards for his song writing and he’s a really good guitarist with a beautiful voice.

He’s a great songwriter but I’m getting him to help me write a really dreadful song, because Cyn has one original song in the set, which is a shocker! I don’t know if he can actually write a bad song, but he can write a lot of really good songs, so we’ll see! It’ll be in that really awful kind of eighties anthemic rock style – that kind of sound.

The band start rehearsals this week. Up until now we’ve just been coming up with ideas with each other online. So real rehearsals start this week.

So are Cyn & The Cynthetics a manifestation of McCabe’s own wannabe rock star dreams? Or are they a hybrid of the stories played out on all those suburban pub stages around the country throughout the eighties, that time when the importance of getting the right balance between hair and spandex was prioritised over musical originality in the minds of those who craved rock and roll fame?

Actually, I was in a cover band very, very briefly in the nineties, but we did mainly disco stuff. This band is more, kind of, pub rock and Cyn believes she has a lot of street cred and stuff and she got a number two hit on Countdown. So she never quite made it to the top – that’s why it’s called The Runner Up – she got to number two, never made it to number one.

And now she’s been reduced to doing really crappy gigs out in pubs that are in places that no-one’s heard of, doing things like Oh Mickey, You’re So Fine and Echo Beach and Living On A Prayer kind of covers.

I don’t use any of those particular songs in the show though, and I’m not going to say what songs I do actually use, but we do a set in the middle of some classic rock chick songs that are actually really good songs.

McCabe’s publicity blurb claims that the show contains shades of Spinal Tap – a statement which is hard to accept. How can any female rock band lower themselves to that level of gormlessness?

McCabe laughs at the observation.

Well, there are two women and two men in the band!

But Cyn is very prone to exaggeration and very much caught up in the whole lingo and in the whole romantic idea of being a rock star. She hasn’t really moved on from 1996, let’s say, and she’s still got these ideas of how it should be and she believes that she’s still going to make it even though it’s very clear to everyone else, except for Cyn, that she’s not going to make it.

The costuming for the show also promises to be ‘eye wateringly shocking’, and McCabe agrees that such a description is deliberately ambiguous.

Think of the worst things you can imagine from the eighties. Have you got that picture in your mind? Ok, good! Now, times that by two!

There’s a few costumes that you think no-one should ever have worn. They’re unflattering on even the most beautiful person, and the way Cyn wears them, well…she just shouldn’t be wearing them. But she thinks she looks fabulous…!

McCabe is no stranger to the stage and has performed in many successful cabaret shows in the past. When asked what is the best thing about being able to disappear into a character on the stage, she answers enthusiastically.

You get to say and do the things you would never usually say and do in real life. And to make people laugh.

That’s the whole point of this show. It’s about a rock band, but it’s really about being human. It’s about this crazy desire that you have to be the best, and you’ve got to win.

We live in a kind of artificial world, on social media where even everyone’s breakfast looks fabulous, and no-one really looks like they do on social media. It’s madness.

And this play is about the glory of being the runner-up – of fucking up.

It’s about being a loser. That’s what people do. We struggle. We lose. We make a mistake and we look bad, and our dreams don’t come true. We follow our dreams and they fall apart. And what do we do next? We get on with it. Maybe this is as good as it gets.

The show is funny and it’s silly, but it’s also about the relationships in the band. How people aren’t black or white. They’re not good or bad, they’re shades of everything.

The Runner Up will be performed at The Distil Bar in Rundle Street – a venue handpicked by McCabe.

I picked the venue because a good friend of mine, Caetlyn Collins, did a show there about a year ago called One Night With Bonnie Weaver, and I thought that this was an amazing venue.

It’s intimate, it fits a maximum of eighty people. It’s upstairs. It’s very much like the upstairs room of a pub which is where such a band would be rehearsing, so it’s perfect for the gig. Plus, it is great for the audience because there is a beautiful cocktail bar downstairs so they can come in and they can grab a drink, a cocktail, or whatever and then come up to the show. There’s also a bar upstairs so they can have a drink before and after the show. It’s also got a good sound system because they have regular DJ sets and stuff up there, and we’re getting all the lighting in, so it’s going to have good lighting as well.

It’s a great venue – and right in the thick of the Fringe so it’s perfect.

The Runner Up is not the first show that McCabe has brought to Adelaide. She brought the show Conversations With Goddesses here in 2014, and she loves coming to Adelaide so much she has now decided to move here permanently from the East Coast.

I’ve been coming to Adelaide for years to go to the Fringe, and occasionally WOMADelaide too, and I go to see as much as I can. I think the calibre of performance at the Fringe is really good, even though I do think it’s getting too big because there are so many choices.

Adelaide is really magical in March and the atmosphere, particularly around Rundle Street, is just fantastic. The climate, the outdoor alfresco dining and the venues – I really like going to the little, offbeat places like tiny art galleries, the small places, as well as the bigger amazing venues.

A lot of big, successful acts come here, and they are great, but it’s also good to get out and see little unexpected things that you nothing about – and some of those have been the best things that I’ve seen.

One of the things I want to look at now that I’ve moved here is to get more stuff happening all year round, and why not? There is definitely the desire and the hunger for it. I mean, there are so many people coming from interstate and overseas for the Fringe, but there are a stack of Adelaide people who come out, particularly to the bigger venues, and they realise how much fun cabaret and circus and theatre is, and edgy experimental stuff is, and I think there should be more of it here because the audience is here for it. So why not?

The Runner Up promises to be one of those ‘little unexpected things’ that turn out to be so memorable and, if all goes to plan, Louise McCabe could also turn out to be one of the catalysts who re-energises Adelaide’s arts scene and gives us plenty to enjoy on stage in those currently not so mad months of the year. Keep an eye out for her future projects!

Tickets are available here: The Runner Up