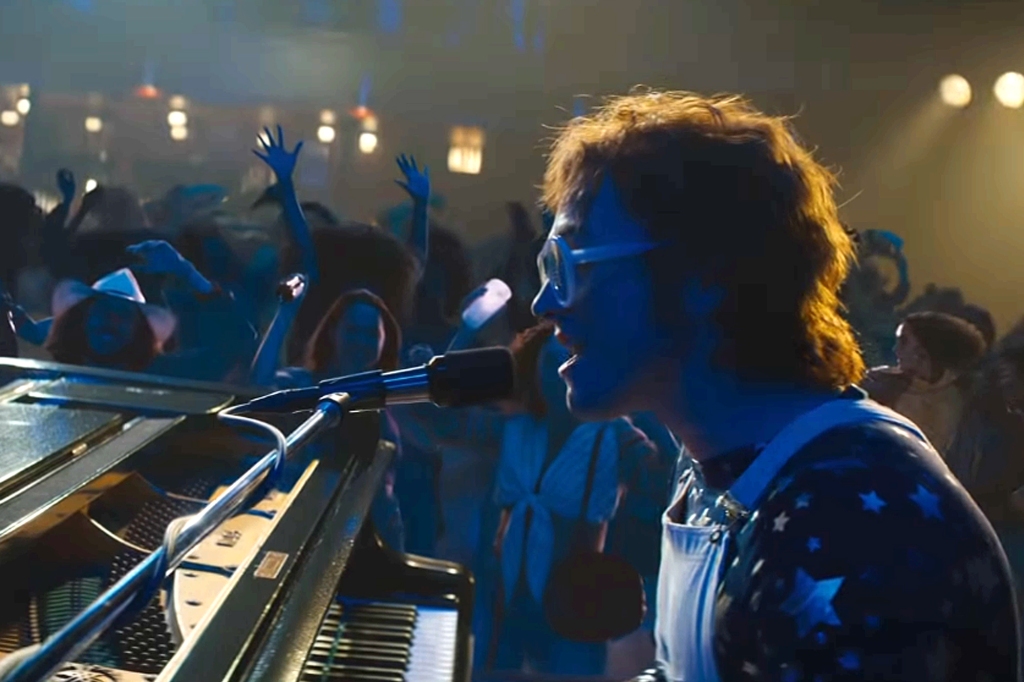 Rocketman is a cinematic explosion of rock and roll, colour and emotional rollercoasters. From the director of Bohemian Rhapsody, Dexter Fletcher, Rocketman delivers the equivalent of one of Elton John’s show stopping Las Vegas shows on film; captivating, awe-inspiring and just a little bit extravagant. Focusing on Elton’s early years, Rocketman is the biopic of Reginald Kenneth Dwight finding music, fame, drugs, his demons and ultimately himself.

Beginning with Taron Egerton’s Elton walking into rehab group therapy in a sequinned orange devil stage number, he begins to recount everything that has led him to that point starting with his childhood. The narrative is delivered through flash backs to the pivotal moments and ongoing reflections as it cuts from memory to his present day in rehab, removing his costume as he lets down his walls and allows himself to be vulnerable. The scenes play out as a mixture of by-the-book biopic storytelling juxtaposed with elaborate, bright and stunningly choreographed musical numbers. The songs, chosen from Elton’s extensive catalogue, play out at the times they’re most relevant to the story line and character development, rather than being confined to the limitations of linear story-telling. Add a dash of hallucinogenic fantasy and Rocketman delivers the facts so artistically marvellous they seem all but fiction.

Fletcher once again proves his tremendous directorial capabilities, bringing Lee Hall’s script to life. Balancing the highs and lows of the neglected-child-turned-musical-prodigy-turned-superstar, as Elton progresses through his complicated relationships with his parents, coming out, finding drugs, falling in love, having his heart broken, a horrible manager with an insanely attractive accent and trying to end his life. Rocketman allows the viewers to get to know the Elton most of us have only ever heard about: the alcoholic, cocaine addict, sex addict, bulimic, shopaholic (okay so that one is still present) mess that launched to fame so fast he came back down to earth even faster.

The entire cast deserves praise for Rocketman, however, no one more so than Taron Egerton. He delivers the performance of his career bringing Elton to life; sequinned, healed and fully committing to the darkness and complexity that underpins the films narrative. There are few people that could deliver an Elton ballad but not once did Egerton’s vocals disappoint. Jamie Bell provides the gentleness this film needs with his performance as Elton’s writing partner Bernie Taupin, and his chemistry with Egerton allows viewers to see inside what was, at the time, Elton’s most important relationship. If you loved Richard Madden in Game of Thrones, be prepared to absolutely loathe him in this as he faultlessly plays the manipulative and self-serving John Reid.

The film’s greatest strength is it takes off its rose coloured glasses and lets you see the mean, cruel, self-sabotaging side of Elton. It doesn’t gloss over the completely horrible bits or tidy up the mess that was this part of Elton’s life. It’s raw, it’s honest, sometimes it’s uncomfortable, but mostly it’s real. The fashion department deserves the highest praise for the incredible costuming throughout the film, capturing not only the essence of the era but also of Elton. Each department, from set designers, to location scouts, to hair and make-up, work so seamlessly together that you are genuinely transported back into Elton’s memories right with him.

As for the film’s faults, there are a few but they’re easily forgiven. Occasionally the fantasy sequences, whilst truly representative of a character who lived a lot of his experiences inside of his mind, fall short in execution and manage to teeter on cringe-ville, thankfully without ever falling over the edge completely. It is an unusual method of story-telling that lovers of music driven films such as Across the Universe will feel comfortable with, but for the viewers more used to the classic biopic format, may come across as out of place and completely unnecessary. It does create some of the film’s harder hitting emotional moments, however. For some, the drug and sex scenes will be too real; this film holds no punches back, and that’s not everyone’s cup of tea, and if you’re hell bent on it being chronologically accurate, rather than emotionally, the song sequence will bug you no end.

Rocketman does nothing short of strap you in and send you deep into the life of Elton John on his rise to fame, the fantastical, bejewelled, colourful, explosion of chaos that it is. It hides nothing and at no point attempts to deny that Elton was not always a good and definitely not always an easy person. As Elton himself said, “obviously it’s not all true, but it’s the truth” and there’s no denying that. You walk into this film expecting to see the music and the career that made the legend, but what you’re gifted is the beautifully raw Reginald Kenneth Dwight, learning that the only love he ever needed was his own.

Rocketman is a cinematic musical masterpiece and a heart-warming ode to self love.

See Rocketman in cinemas from May 30.