Our highlights for the second day of this year’s WOMADelaide included The Blind Boys of Alabama, Rhiannon Giddens with Francesco Turrisi, Aldous Harding, Spinifex Gum, Dyson Stringer Cloher and Salif Keita. After the overcast conditions of the first evening, the sun came out for Day Two and the great music continued. 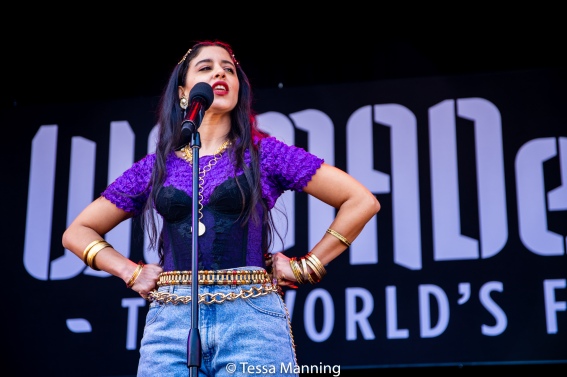 With stunning vocals, fierce moves and incredible stage presence, Greek singer Marina Satti performed a wonderful set on Stage 2. Performing a full set of beautiful, infectious and hard-not-to-dance-to tunes, a crowd favourite was ‘Mantissa’, which was an anthem of hope in the Northern summer of 2017 and has a fabulous, single shot video that has been viewed more than 40 million times. Her backing group Fonés, who started as an a capella group with her, kept the grooves coming as they provided a taste of Greek, Balken and Middle-Eastern music with an urban edge. 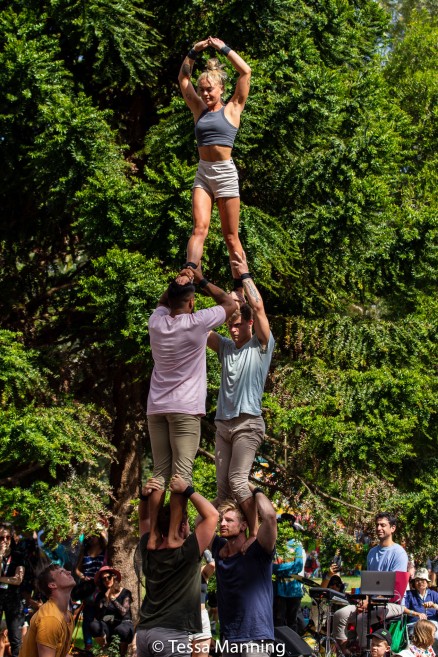 Meanwhile The Blind Boys of Alabama backed up their opening slot with another first rate performance, this time under the piercing mid-afternoon sun and appearing in stylish red tuxedos. They really do know how to put a great show and for an hour we all went to church, with searing gospel arrangements, punctuated by some excellent blues from their backing band. The outfit’s harmonies are truly something powerful.

The very talented Gravity and Other Myths (and now perennial festival favourites here in Adelaide), added something different to the WOMAD experience, with their roving acrobatics display opposite State 2. The act will return each day of the weekend, so be sure to catch them.

Over on the Foundation Stage, Rhiannon Giddens and Francesco Turrisi provided a blend of musical styles that was perfect for this festival. It was also unusual to see a stage that is usually filled with performers occupied by a simple trio. Journeying through folk, country, jazz and other world music styles, it was a truly eclectic blend that could be appreciated equally by those dancing near the front as those who were laying under the trees at the back.

The last time Aldous Harding played in Adelaide was Laneway Festival a few years ago, where she drew a small but appreciative crowd. Whether her singular musical style is better suited to the WOMAD set or that her reputation has justifiably grown, this time around there was strong competition for spots at her 5:15 Stage 2 set. Mostly seated on her stool and softly spoken between songs, Harding let the music do the talking (along with a very expressive face), with the nuanced, affecting compositions rendered beautifully by her ensemble. Her mid-set performance of ‘The Barrel’ proved very popular with the audience, as was ‘Imagining My Man’ in the encore. It is important that softer singer-songwriter material like this is given space on the festival line-up alongside the bigger funkier acts, and this worked well in the pre-dinner slot on the big stage. 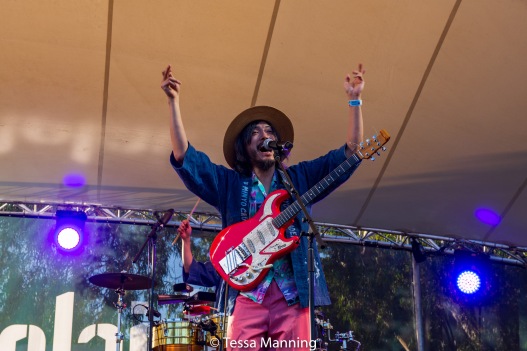 One such big act was to be found next on the Foundation Stage in Minyo Crusaders. Full of colour and energy, this was almost every ingredient of WOMADelaide rolled into one: a Japanese folk / funk band with traditional stylings who manage to cover latin and afro beat, with the odd detour into reggae. All terrific fun!

Public Opinion Afro Orchestra were similarly colourful and energised, capturing the spirit of Fela Kuti. Of particular note were the wild dance moves of the four backing singers amongst the excellent solos and crowd participation.

Over on the Zoo Stage, Dr Piffle and the Burlap Band played folk music with a punk attitude, but could have done with a bigger stage and sound system. Proving very popular, it was near impossible to get a glimpse of the outfit.

In collaboration with Cat Empire’s Felix Riebl and Ollie McGill, Marliya from Gondwana Choirs have created Spinifex Gum. Singing about life in Western Australia’s Pilbara, the choir of young Aboriginal women promote powerful messages about equality, friendship, racism, injustice and stories of the people of the region. With striking choreography, beautiful voices, powerful images projected onto a screen behind the choir, and guest appearances by Felix and Briggs, Spinifex Gum is an awe-inspiring musical and theatrical performance in its own right. But it’s the lyrics and the stories, and the way the young singers lift up their voices, share their experiences, bare their souls, and ask us to join with them that makes this group unique to other acts we’ve seen at this festival. It is simply breathtaking. If you missed them, go and see them perform as soon as you can. Buy their album, listen to what they’re telling you, and add your voice to theirs as they protest the injustices served to their community and many other communities in our country.

Comprising some of out best singer-songerwiter talent, Dyson Stringer Cloher produced an excellent album last year and sounded just terrific for their late night set over on the Zoo Stage before a very appreciative audience. The trio harmonise so well and manage to bring together garage rock, country and folk into an irresistible blend. It was also great to hear some of the best guitar work at the festival so far, particularly for Mia Dyson (who also swapped bass duties with Liz Stringer).

Known as the undisputed Ambassador of African Music, Salif Keita’s high energy set on the Foundation Stage was the kind of evening finale that has become customary at WOMADelaide, after a huge day of sampling the festival’s unique and exciting musical smorgasbord. Although the crowd started thinning out early, Salif Keita’s set was all high octane grooves, powerful vocals and dramatic percussion and was the perfect way to celebrate his farewell tour, marking 50 years of music and 70 years of life.