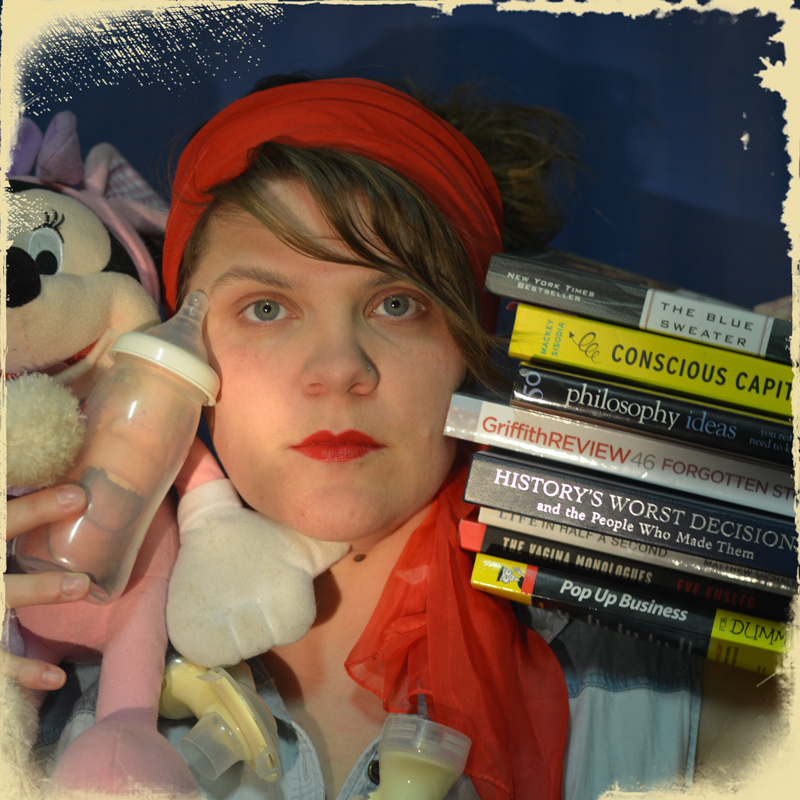 Another Elusive Maybe is her one-woman show playing for three nights during Fringe in your own lounge room; well, someone’s lounge room, anyway.

The concept was imagined into life when Alysha was musing about how to reach out to audiences as a theatre maker, and her own experiences as a mother.

“It’s come from two separate places that have come together. I love theatre, and I love all the arts, but there’s a bit of a thing where we’re kind of making it for the same audience all the time. I work with a lot of young people who don’t have a lot of financial resources, or maybe they don’t have cultural literacy because they haven’t had much exposure. I’ve been thinking a lot about how to make things that aren’t in theatres or galleries, because a lot of the people I want to be in conversation with, which is what I think art is about, are people who won’t come to a theatre, gallery or opening night,” she says.

“Then I started thinking about where those people might come together, and that led me to thinking about party plans, like Tupperware and The Body Shop; all these mechanisms where people get together in a lounge room, eat some food, have a presentation and buy some products. At the same time, I started thinking about my experiences having a baby the second time around. With the first one, I was a 17-year-old, high school drop out in an unsafe relationship; so lots of toxic, gross stuff. This time around, I had an excellent husband, a great job, a great life; but I still felt incredibly isolated.

“I was thinking about these two things and then they came together and I said, you know what? I’m going to do a show in people’s lounge rooms that riffs off the idea of a Tupperware party that’s about being a new mother and feeling completely alone and not knowing how to ask for help,” Alysha says.

For this season, Alysha has selected the hosts of the show/party, but once you’ve seen the production, you can book to host it in your own home with your own friends.

“For the Fringe, I’ve asked three artists to host the show, but if people who come like the show, they can book to have the show in their own lounge room. There’s three shows that are part of the Fringe, but after that, I will do the show for people at their house,’ she says.

“The content of the show is very personal and autobiographical. It is about loneliness so it’s intense, but what I’m looking for is, afterwards, I go away and you have a conversation with your own group of friends. The show is a starting place for that.”

But rather than just being a monologue on the sofa, Alysha has produced an interactive experience using modern technology.

“We’re using silent disco headphones as a core part of the experience so each show is limited to eight people. Also, I’ll also be having a text message conversation with people in the audience throughout the show. it’s a bit like when you go to a conference, you get all the cool content, but if you happen to have twitter, you also get an underneath, back channel. So it’s kind of like that. If people come and they didn’t bring their phone, or their battery is flat, or they don’t have credit, it’s ok. They’ll still get the experience and they won’t miss out. But if they do have their phone, they’ll get an additional underneath experience that deepens the whole thing.”

Wearing her heart on her sleeve with this show, Alysha hopes that sharing her own experiences will resonate with people and start some conversations she feels may help people to feel less isolated.

“I hope people connect to it and learn from it. I think it’s like a blog, but a live blog. You know when you read those blogs and it’s someone just talking about their own stuff, but you think I feel that too! and I’m not alone! And that’s what I’m trying to do. I’m not trying to give anyone answers, I’m just saying it’s an experience that I’ve had, and one that is often silent or invisible,” she says.

“It’s not a resolved narrative; it’s evocative. It’s stuff I worry about, wonder about and feel and I want people to have a conversation afterwards because, to me, that’s what art is about. It’s about helping us think about and talk about things. So hopefully, that’s what it does.”

Another Elusive Maybe is playing February 16 and 23 and March 8, with tickets through Fringetix. Venue will be confirmed before the show.

Libby Parker is a journalist, teacher and life enthusiast.
You can follow her on Twitter at @upsidenews_lib