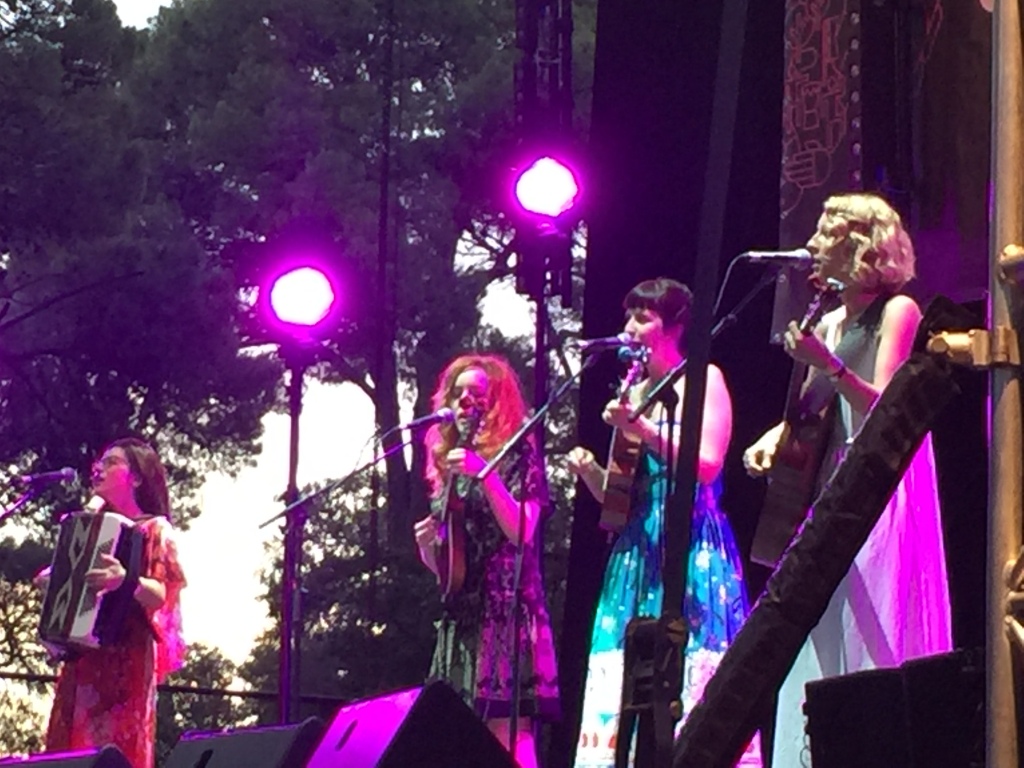 WOMADelaide 2016 kicked off in grand style with one of the most jam-packed Friday night line-ups in memory. In the humid evening weather, the large, sweat-glazed crowds were more than ready to start their long-weekend in party mode and

Hazmat Modine got the carnival atmosphere going with an energetic opening set on the Foundation Stage (formerly Stage 1). The upbeat blend of jazz, blues and New Orleans brass was the perfect start to the festival and the audience was immediately into the swing of things. Unfortunately, a few hiccups at the gate led to unusually long queues getting into the event, and some missed out on the performance.

7pm was perhaps the busiest time-slot of the night with a wealth of options. On Stage 2 indie stalwarts The Violent Femmes began proceedings. Thirty years on they know how to please a crowd; setting the bar high from the start, a huge roar went up when they opened with their eponymous hit, ‘Blister in the Sun’. Continuing in this vein, the band relied heavily on earlier songs, but did pull out some newer material (including a polka from the new album). Admittedly, at this stage of career, they do feel a bit like a band going through the motions, but the audience (many of them dancing at the back) were having a blast, so that probably didn’t matter much.

At the same time over on the Moreton Bay Stage, local troubadour and former Lowrider frontman, Joe Braithwaite used the picturesque setting to showcase his new solo project, Ripley. Backed by a bassist and a drummer, who left the stage while Joe performed solo acoustic numbers, Ripley gave an intimate, soul-reaching performance and we are sure to see a lot more from him in the future.

Over on the Novatech Stage (formerly Speakers Corner), All Our Exes Live In Texas delivered an exquisite early evening performance underneath the Botanic Park bats. A collective of four Sydney singer-songwriters, their flawless harmonies, engaging banter and bittersweet alt-country / folk songs provided the perfect atmosphere to kick back with a bottle of wine. This quartet of talented women will return tonight at 10:15, so be sure to catch them. Also look out for their debut album, due in the next few months.

Blues two-piece, The Cedric Burnside Project was anything but chilled over on Zoo Stage at 8:15; in the limited stage space the crowd were tightly packed and

throbbing. In the sticky night this felt like an old school juke joint; we could have easily been in the deep south. Drummer / singer, Cedric Burnside is the grandson of blues legend R. L. Burnside and you can hear how this musical legacy runs in his veins. His songs were seized with a terrific, infectious energy and the audience were lapping it all up. This was a wonderful WOMAD performance, and perhaps deserving of a bigger stage.

Back on Stage 2, Indigenous dance outfit, Djuki Mala delivered an entertaining and heartfelt performance, starting with traditional dances before showcasing a range of contemporary styles. Effectively incorporating video into the show, the performance was also presented with a great deal of humour.

Meanwhile over at the Moreton Bay area, The Jerry Cans gave us one of those very WOMAD experiences, with a unique and engaging blend of alt-country, folk, reggae and throat singing. They told stories about Canadian Indigenous history and customs, sharing the language and culture with a very receptive audience.

The Cat Empire had the headline 10:30 slot on the main stage, delivering the end of night party that everyone was looking for. Starting with material from current album, Rising With The Sun, the newer songs stood up well against the back-catalogue, the band even pulling out a number of crowd-pleasing gems from their first two albums. One of the best bands in the country, The Cat Empire are best experienced live, and WOMAD is the perfect platform for their music. There were plenty of instrumentals, including an awesome drum solo in new track, ‘Daggers Drawn’. Their ode to live music, ‘Bataclan’ written in response to the tragic Paris attack last year, was another highlight. After a ninety-minute set, the band delivered an encore and everyone left very satisfied.