Off the back of the release of their new album, Rising With the Sun, which debuted at number one in both the ARIA and AIR charts in Australia, Cat Empire return to Adelaide.

Also debuting in the top ten in seven countries, and top 20 in 16 countries across six different continents on iTunes, the band’s sixth studio album has made it’s debut in the top 10 iTunes albums worldwide.

Not a bad feat for the lads from Victoria who have been pleasing our ears with their Latin influenced ska jazz reggae alt rock for almost two decades.

To celebrate, The Cat Empire have been touring flat out this year and will be returning to Adelaide on May 26 to play Thebarton Theatre.

We spoke with co-front man Felix Riebl, when the band were here for WOMADelaide, about the new album and their upcoming gig at the Thebarton Theatre.

The Cat Empire defy definition, and there lies their appeal; they’re consistently surprising and eternally entertaining, and Rising With The Sun is full of their signature ,festive, world music sound, mixed with an electronic feel (you can read our review of the album: here).

Felix, Harry James Angus, Will Hull-Brown, Jamshid ‘Jumps’ Khadiwhala, Ollie McGill, and Ryan Monro make up the Melbourne group who formed in 1999, and are still going as strong as ever, if this new record is anything to go by.

“We thought we’d stumbled on some form again with Steal the Light, so we went back to that studio again. This album doesn’t sound like that, necessarily, but it has a lot of the bursting, festive atmosphere that album did,” Felix says.

“I’m probably still too close to it to say what it sounds like or how it’s different, but it has some really powerful moments; some that evoke real sadness in me and some that have a real uplifting feel. There’s also a weird, tropical disco thing running through it as well at different points, that gives it a loose edge; a kind of wildness, which I think is part of the band’s more recent sound. It’s a wild album. I think it’s some of our best work.”

With so many stand out songs on the record, Felix feels a particular affiliation with a song about the live music venue tragically attacked last year in Paris. 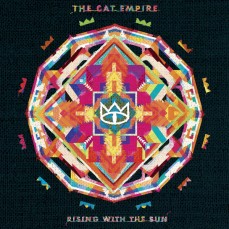 “Probably my favourite song is ‘Bataclan’, which is a song I wrote after what happened in Paris. It’s a venue we’ve played many times and it went straight through me. It really, really cut deep, that whole story. Mostly because of how much it represented our world, having been on that stage. That song is a real ode to performing live. In terms of an experience, being able to use music to express feeling in its most essential way, that’s the song I’m most attached to,” he says.

Click here to read our review of ‘Rising With The Sun’

Following shows at WOMADelaide and Byron Bay Bluesfest, The Cat Empire were jetsetting to the UK, which Felix was looking forward to, particularly after last year’s experience there.

“The UK is great. Last year, we played the Royal Albert Hall. It was one of my most precious moments on stage. I got to perform on stage with my little brother who, incidentally, came up with the name of the band for us when he was eight years old. He’s a classical singer now, so he performed a song with us called ‘Miserere’, which he sang on as a boy soprano when he was ten. It was a really special moment for me,” he says.

“We’re also going back to Edinburgh. A lot of the band’s early staying power came from a season in Edinburgh where we were playing from about three until six in the morning about three weeks in a row; we have great memories of playing the Edinburgh Festival. I like the UK. It’s a tough, great, generous audience. It demands a lot of you and is very generous in return. We’ve been going back there a long time.”

And straight after their UK stint, the guys headed back to Australia again to continue their album tour.

Coming up on May 26th, The Cat Empire will play an all ages gig at our (and their) beloved Thebarton Theatre.

“I love the Thebby. It’s a great old music hall. It evokes that feeling of nostalgia. You can imagine all the bands who have played in there, all the different things that have happened. A space like that has always been really great for The Cat Empire because we always try to create a festival in any room we go to and that’s a great room and a great canvas to work from. It’s all ages as well, which is another great thing,” Felix says.

“The Thebby is like part scout hall, part concert hall. It’s an exciting stage to be side stage at. A lot of venues are judged by that moment between backstage and being on stage. It’s that moment that precipitates the night in many ways; it’s the one time you’ve got to be with yourself before you’re with many, many different faces. The Thebby’s got a really nice walkway from backstage to the stage.

Performing is such an intimate experience and

before you walk in, you’re alone. Some people say a little prayer, some people have a last drink; it doesn’t matter what you do. Then you go out and see all of these faces, so it’s a really subtle, beautiful point in time to be standing there each night.”

This profound experience is the reason why Felix keeps coming back to the stage, time after time.

“Strangely, the reason I do what I do is to have moments like that, both side stage and on stage. The view of being involved in music and seeing many faces in front of you, as well as brief moments of real privacy, that triangle of elements creates the closest thing to a dream that you can get while you’re not sleeping,” he says.

“I’m not talking about a dream, like a goal in life. I’m talking about an actual dream. It becomes a subtle and profound moment in your life that continues. I don’t often remember shows, I remember them when I’m back on stage again. That’s what makes it so appealing and why performers keep coming back to that place; they want to remember that dream again.”

You can be a part of The Cat Empire’s dream state at the Thebarton Theatre on May 26 by booking your tickets here and you can buy Rising With The Sun on CD, vinyl or download here.