Adelaide based Lucas Laufen has spent the past years compiling his life into music and is now packing his bags to take on the music scene in Europe. 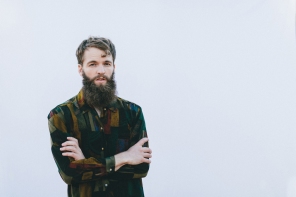 All is not lost though, because you can catch Lucas performing one more time before his big move if you get to the Grace Emily Hotel on Sunday.

Launching his new single ‘Boulders’, supported by Luke Marshall and Alycia Budd, Lucas will demonstrate the musical storytelling that earned him sold out audiences at the Adelaide Fringe Festival.

Before heading off to Europe for a new stage in his musical journey, Laufen will be launching his single at the Grace Emily Hotel on Sunday 22nd of May. With support from Luke Marshall & Alycia Budd.

Lucas spoke with us recently about his music and his plans to move overseas, specifically to Berlin, where he feels he’ll fit right in.

“I’m moving to Europe to further pursue my music,” he says. “Berlin has such a diverse range of cultures and I can’t wait for some new inspiration. Coincidently, I was born the same day that the Berlin Wall came down so I think it will welcome me with open arms.”

The big move is also the reason Lucas is sharing his single ‘Boulders’ at The Grace on Sunday, as he explains:

“It’s all come down to time and my lack of it! I booked my flights to Berlin to force myself to finish an EP before I left. I’ve managed to get the songs recorded in time, but I’m still a fair way from being ready for release,” he says.
“I finished Boulders first to make sure I had time to roll out a polished released and not rush anything. It’s my first release so I wanted to make sure I did it right and not cut any corners.”
The single itself was inspired by his immersion in song writing and making music, and is a dedication to those who supported him through that.
“‘Boulders’ was written about the stress and selfishness that came from immersing myself in my music over the last few months. I was spending so much time alone with my guitar that I didn’t have time for my friends and family,” he says.
“It’s an entirely self generated feeling, and I was getting all the support that I needed, but I still felt a little narcissistic about the whole process. It’s a song for all the people that stood by me and helped me through the last few months, especially my girlfriend who’s been amazing.”
Choosing to celebrate the release of ‘Boulders’ at The Grace is a nod to his musical origins, and a good excuse to create some memories to take with him to Berlin.
“The Grace is definitely one of my favourite venues in Adelaide! I love that it supports live music on most nights of the week and the atmosphere is something that’s hard to come by. I first discovered the Grace on a Monday night a few years ago where I played an open mic night. I’ve been going back ever since and it’s definitely something that I’ll miss about Adelaide. An open fire place, Coopers on tap and no pokies also scores points in my books,” Lucas says.
Helping launch the single are an old friend from back home in Port Lincoln and a new friend that he’s looking forward to sharing a stage with.
“The supports for the night are Luke Marshall and Alycia Budd. Luke is a really close friend of mine and has really helped me to realise my love for music over the last two years. Luke and I both come from Port Lincoln and we’ve kind of found each other in the last few years since he moved back to Adelaide from Melbourne. He plays dreamy folk music that goes down a treat on a Sunday evening,” Lucas says.
“Sian from Little Acorn put me on to Alycia who was happy to lend her beautiful voice for the night. I’ve actually never heard her play live and am pretty excited for her set. I think the charm of the show will be in the unique circumstance. I’ve only just launched myself as an artist so it’s going to be a simultaneous hello and goodbye. Luke and Alycia will help provide a warm atmosphere and hopefully we will pull of something special! It will be an amazing way to spend my last night in Adelaide.
Check out Lucas Laufen at The Grace Emily on Sunday 22 May from 5pm; you can grab your tickets HERE.
Listen to the single, ‘Boulders’ HERE.
By Libby Parker
Photo supplied