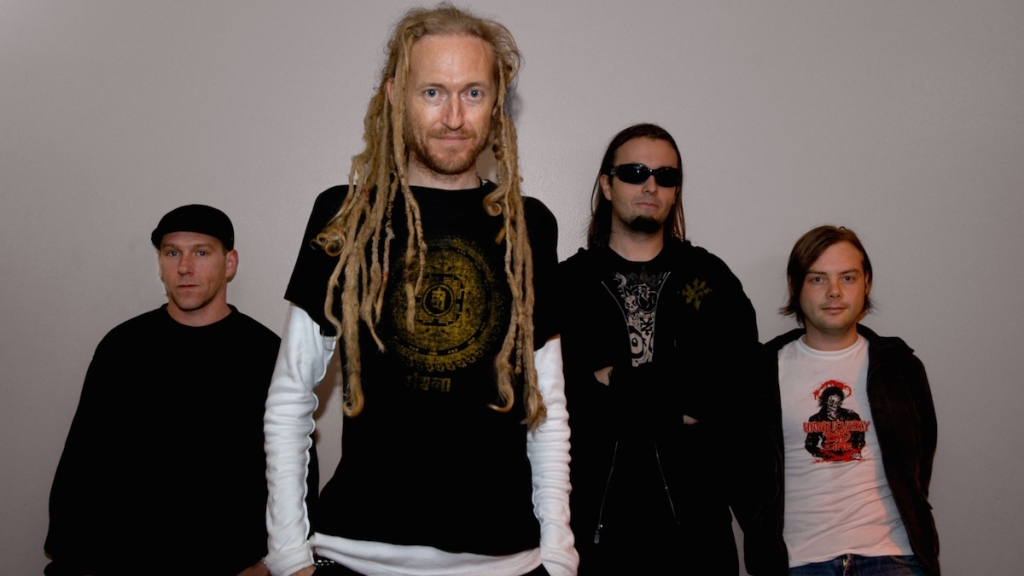 Legendary Aussie punk band Frenzal Rhomb are celebrating 25 years in music, and to mark the occasion, they are touring the country and releasing a new album of old songs.

We Lived Like Kings (We Did Anything We Wanted) is the ‘best of’ album the group have released in honour of their quarter century in the biz.

We spoke with Frenzal frontman Jay Whalley while he was on the side of the road under a flight path in a laneway in Marrickville about how the band started and where they’ve gone since.

In 1992, Jay Whalley and Alexis ‘Lex’ Feltham formed Frenzal Rhomb in Newtown in Sydney and released their first EP in 1994.

We asked Jay what it feels like to have been in music for 25 years, and whether that time has flown by.

“In some ways, time has flown, and in other ways, it’s been excruciatingly long. It’s been a good time, over all. It’s been surprising. When I met our first guitarist at university and I went up to my dad, who is an academic, and I said, ‘Dad, I’m dropping out of uni and I’m going on the dole, and I’ve started this punk band and, here’s our first EP. It’s called Dick 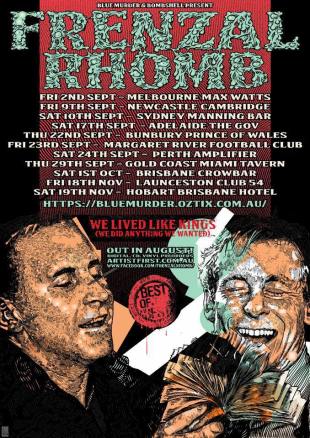 Sandwich’, and I showed him the artwork, which had all these severed penises on the front and a guy eating it as a penis sandwich, as the name suggests, and you’ve never seen a more disappointed guy in your life. My comeback was, ‘Oh, as if I’m going to be doing this when I’m 40!’ and here we are,” he laughs.

“It’s a cliché, but the friendships you make along the way, within the band and with people you meet, you don’t get that in a lot of other industries. You’re living incredibly close to people and you’re doing this creative thing and you’re travelling; you meet very like-minded people very quickly, and even if it’s for short bursts of time, you form these strong bonds with people,” he says.

“And every cheque we’ve ever gotten has been our last cheque, so we’ve just gone, ‘Oh well, that’s a bonus that we got some money for that. Isn’t that nice, someone bought a t-shirt!’ So you can’t count on that. A lot of people have careers in industries because you have security, but music isn’t like that at all. You have boom times and lean times, but through all of that stuff, you make these friendships that seem to transcend everything else. Oh, that’s really nice, isn’t it? Am I crying? I think I’m crying now.”

Although a difficult industry to work in, Jay tips his hat to anyone making a go of it in music in Australia.

“Anyone making music in this artless country gets my seal of approval, no matter what you’re doing. It’s still not seen as a legitimate thing to do with your life in Australia. It’s a bit of a joke. I still get people at family gatherings ask me, ‘Have you ever thought about going on The Voice?’ thinking somehow if you’re not on the telly or being played at the IGA, that you’re not really doing it,” he says.

While Frenzal Rhomb may not be piped through the speakers at your local supermarket, they have plenty to show for in their 25 years, and the new album of old stuff, We Lived Like Kings (We Did Anything We Wanted) is out now and the band chose the playlist of their favourites together.

“It was a punk rock, Excel spreadsheet that was sent around to the band and everyone picked 35 songs and that’s what made it on there. I particularly enjoy the song, ‘I Miss My Lung’, because it’s incredibly slow and it gives me time to have a rest on the stage. I think it’s a nice song. I always feel I know when I’ve written a good song because it sounds like I didn’t write it. I listen to the chorus and think, That’s actually quite good. Maybe I’ve stolen this from somewhere,” he laughs.

Having toured the world with twelve studio recordings spanning between 1992 and today, Frenzal Rhomb (allegedly named after a band member’s rat) have visited some strange and amazing places.

The first time I saw them was in 1999 in Jindabyne when I was living in the snow for a season, and Jay reckons Jindy is definitely among the strangest of the locations they’ve played.

“Jindabyne has to be up there. They’ve got to be some of the most violent shows we’ve ever done. No one comes from there. It’s like this microcosm of the whole country getting together in one room and the only thing they have in common is that they enjoy the cold, and that’s not enough. It’s not enough to get along in a harmonious fashion,” he says.

“They’re always a bit nutso, those shows. We’ve played lots of weird places. It’s crazy that this band, that we started as a bit of a laugh, has played in Israel, South Africa, Taiwan, Europe, Japan, America, Tasmania; we went to Geelong once, that was cool. Adelaide’s my favourite though, and I’m definitely not just saying that because you’re from there,” he laughs.

“Adelaide is good, actually. They have always been big supporters of Frenzal Rhomb, even when we put out our worst record and it bombed everywhere in the country, except in South Australia. That was in the last days of state by state charts, and South Australia was the only place that our Shut Your Mouth album sold copies. Our bass player, Tom, is from Adelaide so we have a special place for Adelaide in our Frenzal Rhomb heart.

And speaking of Adelaide, the band will play The Gov in September with the set list being made up of votes from fans.

“We have a very democratic system in place,” Jay explains. “It looks like the ‘below the line’ section of the Federal Election voting sheets. There’s about 180 songs and you get to pick 10 and everyone gets one go each on Facebook and whatever the poll results are, we’ll have a look on the day of the show and go, ‘F*ck, we can only play about 10% of these!’ and then hurriedly scramble with some acoustic guitars in the backstage room before the show trying to work out how they go and then play them. We are hoping people like songs we already play.”

You can catch Frenzal Rhomb on Saturday September 17 at The Gov, with tickets available through Oztix.