Adelaide actor, director and singer Hollie Andrew is taking on the theatre scene in Queensland by launching the first profit-share professional theatre ensemble on the Gold Coast.

Originally from Adelaide, award winning star of stage and screen, Hollie has film (Somersault), TV (Supernova, Fat Tony & Co, Home & Away, CNNNN and All Saints), and stage credits (The Adventures of Snugglepot and Cuddlepie, Metro Street, The Sapphires, The Rabbits and Wogboy) to her name.

From January 11 until 20 (inclusive), the ensemble will perform a play that is quite close to Hollie’s heart. 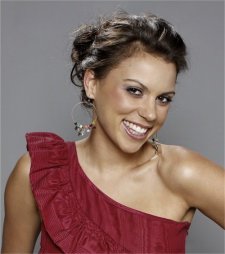 “Spring Awakening was the show we did as our year 12 production back in Adelaide,” Hollie says. “We were so confronted as students when our teacher [at Norwood Morialta High School], Mrs Kotrotsos suggested it to us, and it nearly didn’t go ahead because the headmaster at the time almost pulled the pin, but we did it and the play really stayed with me because Mrs Kotrotsos talked about why the themes of the play were still important at the time and it is still as relevant as it was 100 years ago.”

For her debut production with the company, Hollie has opted for a directorial concept of the storybook with a warning, a message she believes is still important.

“I’m treating it like a fable,” she says. “Like the boy who cried wolf, like a warning. These lessons are important and need to be heard and need to be learned, and the lesson is be honest and communicate with your kids because they are going to do things that come naturally anyway; and when they ask advice, be honest because if you’re not, then it’ll turn pear-shaped, which is what we see in the musical.

“I treat it like a story book, like a cautionary tale. We have an amazing set, which I designed which is a huge industrial dolls’ house with ten little windows and we’ve blocked all the scenes in the little windows, so it’s very much like a storybook. The material is pretty hectic and pushes a lot of boundaries but when you take it in the way of a cautionary tale, it’s not as scary to experience.”

And this production is the start of an innovation, which will hopefully see Hollie launch the professional theatre scene on the Gold Coast.

“Our theatre culture up here is amazing, but it’s not huge. We struggle to get numbers at productions,” she says. “Some of the big shows charge up to $100 a ticket, so many families can only afford one of those a year, which means there is less audience for smaller productions. There are audiences out there craving gritty, edgy independent performance, something the larger production companies can’t afford to put on, or it won’t make enough money to warrant investing in. This is where independent companies can step in and take on those shows that are changing the way we see theatre. Amateur theatre does that well, which is fantastic, but we want to pay the actors and creative team who put shows on.”

While Hollie has lived in many places around the world adding achievements to an already illustrious career, she has settled in Queensland and is passing on her experience and knowledge in her new hometown.

“I came back from L.A to do Fat Tony & Co, the Underbelly series, and I was living in Melbourne, but I never really gelled with Melbourne that closely. It’s a great place to visit and a lot of great stuff happens there but I always knew I wanted to be somewhere the sun shines, so I made the move up to Queensland,” she says. “I found NAPA, a company of performing arts up here, which in the past, focused on kids 18 and under.

“What they do is great. And when I arrived I realised there was a really strong amateur theatre scene and I asked about professional stuff, and there’s stuff in Brisbane, but nothing here. So I threw the idea around about a profit share I had seen that works, where the company makes money and we all share it. We decided to give it a crack. It’s been interesting for me to go from being on the stage an in front of it all to being behind the scenes wearing ten different hats, directing and producing. It’s been a lot of pressure, but it’s been wonderful to dream big and create new things. I’m at an age now where it’s up to us to take the reins and put new ideas out there and throw everything we have at them.”

Keep your eye out for more from Hollie as the Adelaide gal adds her sparkle to the Gold Coast scene.

If you’re in Queensland, get along to Spring Awakening by purchasing tickets here.