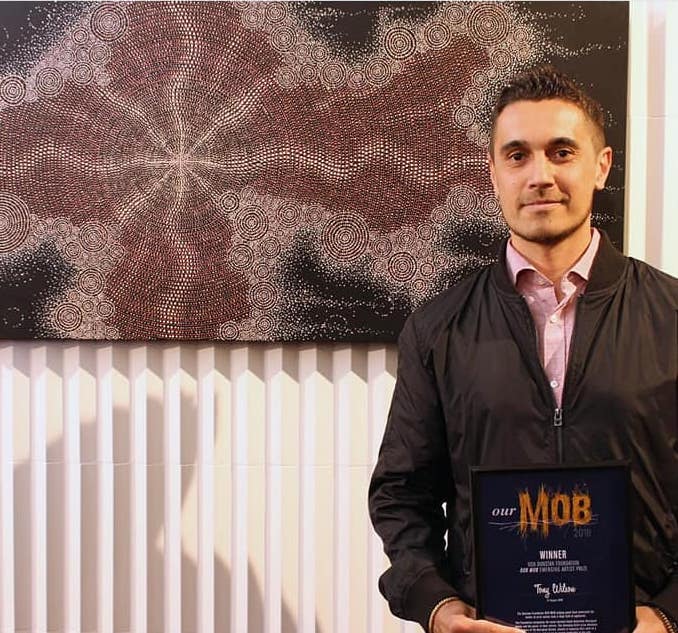 Last week, Ngarrindjeri and Nurungga man Tony Wilson was announced as the 2018 winner of the $5,000 Don Dunstan Foundation Our Mob Emerging Artist Prize at the 2018 OUR MOB opening at Adelaide Festival Centre.

The prize win will allow the 37 year old Port Adelaide resident to further his own art practice through a mentorship with prolific South Australian Aboriginal artist Damien Shen.

The six month mentorship, beginning next month, will assist Tony in his preparation for a solo exhibition at Port Adelaide’s Fontanelle Art Gallery as part of Adelaide Fringe Festival 2019.

Tony, who recently spent time as Alberton Primary School’s Artist in Residence mentoring young artists to find connection to culture through art, impressed the judges with his exceptional painting on canvas, titled ‘Uncle’.

“This painting is an acknowledgement to leaders in our community not only past and present but also our future leaders. It suggests the importance of how our present choices have impact on the people and environment now and into the future. It’s about empowering ourselves through empowering others,” Tony says.

Winning artworks can be seen HERE.

OUR MOB will be showing from 1 September to 14 October from 9am – 6pm Monday-Friday plus Festival Theatre performance times at Festival Theatre Foyer Galleries, Adelaide Festival Centre. Get more info at the website.