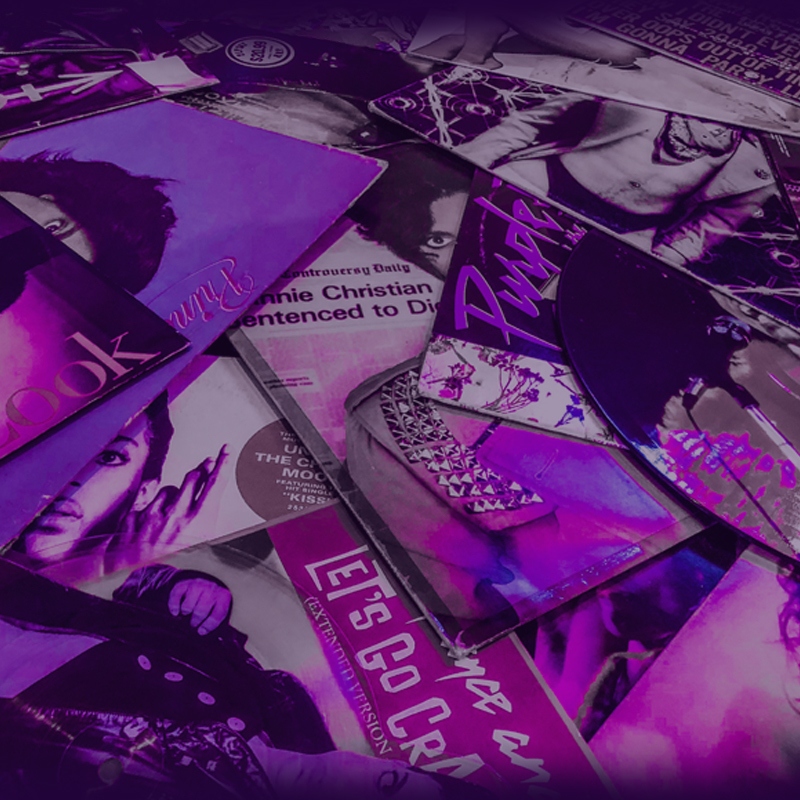 Sitting in my father’s car outside a hardware store, waiting for him to finish procuring the materials for his latest handyman project, I first heard David Bowie on the radio. I was twelve years old. The song was ‘Starman’. I made my dad drive straight to the record store to buy me a copy of the single, and this science fiction addict was instantly hooked and a life-long devotion to all things Bowie was hard-wired into my brain.

For singer and performer Michael Wheatley a similar process occurred when he first heard Prince sing ‘Little Red Corvette’ when he was thirteen. Attracted by the fact the song was about Corvettes, which appealed to his love of these iconic cars, and that it also mentioned Trojans, which he naively believed was a reference to one of his other interests – Greek mythology – he went out and bought the seven-inch single, and another teenager was primed ready to be converted to the cause of idol worship. (And it was some time later that his mum actually explained to him what the ‘pocket full of Trojans’ line actually meant!)

The covenant was sealed when Wheatley finally saw what Prince looked like when he appeared on Countdown singing ‘Purple Rain’, and subsequently had to defend his fandom against a sea of homophobic schoolboy taunts at school.

“He didn’t look gay at all to me. That’s what I reckoned women would be attracted to. On the inside, I’m going, ‘Wow! I feel like I’m looking at my brand new super-hero. I want to be like him when I grow up!’ It was quite an interesting moment for me – and quite defining,” he says.

Such unfettered love for an artist means you accept them into your life and value them as much as you would a close family member, which makes it very painful if your idol tragically dies without warning.

Wheatley’s Adelaide Fringe show is called Forever In My Life – A Tribute To Prince and will be an exploration of how important Prince has been in soundtracking his life, shaping his decisions, and inspiring his creativity.

Most of 2018 was spent writing and refining the show, after allowing himself a year to get used to the fact that Prince had passed away so unexpectedly in 2016.

So far, the show has been performed only once, a preview show in Sydney, but the audience reaction there has convinced Wheatley that his Prince story mirrors the similar experiences of others, and the outpouring of emotion at the show was palpable and affecting.

“The feedback was incredible, and a lot of people cried!” he says.

Currently in Perth to perform the show at their Fringe, where ticket sales are going gangbusters, Wheatley intends to continue refining the show in readiness for its Adelaide season at the A Club on Tuesday nights throughout Fringe month, and he is keen to distinguish his tribute to the Purple One from other Prince tributes at this year’s Fringe.

“It’s not like a covers band playing the music note for note and imitating Prince, it’s me, at a piano, and I tell a story of my life, essentially, and there’s a Prince song attached to each [key moment],” he says.

“I’ve tried to put together something that Prince fans will love, but it’s also something for my own fans that they all will enjoy. There’s a nice balance, I believe, between the music and my story.

“It’s essentially a cabaret, so the music doesn’t ever really stop. I’m playing continuously. There’s some songs I play the whole way through, some are stuck together. There’s lots of little quotes from his music, and comedy and things like that and from his movies that hardcore Prince fans will get a good chuckle out of.”

Pressed to give a succinct summary about what is at the heart of the show, Wheatley doesn’t hesitate.

“It’s a story about inspiration and imitation. I had been finding, throughout my career, that if I imitated Prince, I started making money. When I was inspired by Prince, I wasn’t making so much money! So [it’s about] coming to terms with that, being an artist, having respect for what I do, but also about coming to respect what he did for me to get me where I am as an artist,” he says.

“It also looks at the concept of the type of grief that you go through when you’re attached to an artist like David Bowie, or George Michael, or Michael Jackson. And there’s this incredible grief that I know I experienced, and a lot of other Prince fans experienced, because he had created a world [for us], a way of thinking, all sorts of stuff. His fans could also be described as disciples, in a way, so when he passed there was this huge grieving process for his fans, myself included, and that is touched on in the show.

“There’s also a bit of a love story in the show – how I met my wife. So, it’s a nice little story. It takes an hour and people are encouraged to sing along. It’s a true tribute. I’m being me and paying respect to someone who helped me become the artist that I am.”

The new show is not the first time Michael Wheatley has performed Prince songs on stage, though.

“When I first left school I got a gig in a Prince concept show. Back in the eighties and nineties there were these concept shows where bands would imitate world famous bands. They’d imitate them musically and visually, and [focus on performers] who, principally, were not coming to Australia – like Prince, back in those days, who hadn’t come out to Australia. So, I got the gig singing in The Australian Prince Show,” he says.

The songs in the show will be taken mainly from, what Wheatley calls, Prince’s ‘Empirical Period’, that rich vein of songs he produced from 1983 through to 1993. He will largely steer clear of some of Prince’s more experimental jazz tinged musical explorations of his later period.

“No, it doesn’t go into that Musicology era, in fact I talk about how, as a fan, I drifted away when that started happening. It wasn’t due to his music. It was more due to the attitude behind it – the whole Jehovah’s Witness thing and how I couldn’t really relate to that,” he says.

In 2016, Wheatley finally got to see Prince performing at one of his gigs on his intimate A Piano And A Microphone tour, only four weeks before the superstar died.

“I got to see Prince performing in a very private situation in a nightclub in Sydney called The Basement. And I talk about how we, the audience, felt during the show. {His death] wasn’t surprising, in a way, if you were there that night. You could tell there was something a little different, you know? He was just, quiet, sedated – and sitting down all night. No-one felt like, ‘Aw, we didn’t get Prince tonight’, because most of us felt that we got more of Prince that night than we could have ever dreamt of, hearing him in such an intimate situation,” he says.

You can tell listening to Wheatley talk about his show, that it will be as much a cathartic process for him as it will be an entertaining and emotional experience for his audience.

“I’m actually very proud of it. And now that I have actually performed it, it’s become real for me. I’ve worked really hard on it for the last year,” Wheatley says.

Forever In My Life – A Tribute To Prince will be performed at the Loft in the A Club, 109-111 Waymouth Street, Adelaide on Tuesday nights throughout the Fringe.

Tickets available here: Forever In My Life – A Tribute To Prince