Yungblud is a new kind of punk act, starting out in the UK and growing to become one of the biggest emerging acts around, he recently made it into Triple J’s Hottest 100.

On the back of such successes, his performance at The Gov was certainly a crowd-pleaser, with the whole room screaming like they were at a Beatles concert as he opened with ‘21st Century Liability’. It’s clear that many of Yungblud’s songs carry a particular emotional resonance for the artist, such as ‘the heartfelt Polygraph Eyes’, which had the crowd singing every word. 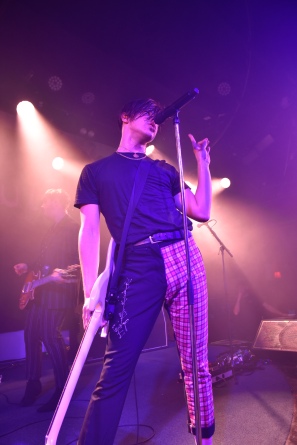 Playing a new, unreleased number ‘Ice-Cream Man’ was a special treat. With just a debut album under his belt, the fans appreciated a glimpse of future material from the artist. Approaching his huge hit ‘Loner’, Yungbud had the audience starting the song off to great enthusiasm.

Engaging effectively throughout the show, he boasted about how Australia was one of the first countries to believe in him and his music. Telling us to check Twitter tomorrow for a special announcement prompted some wild speculation.

Yungblud also relates to his audience on both a political and personal level: one moment dedicating his song ‘King Charles’ to Donald Trump and the next talking about his own anxiety, encouraging anyone experiencing mental health issues to seek help while introducing the song ‘Kill Somebody’.

With the show coming to an end, the performer got more rowdy, throwing guitars and a microphone stand into the drums and standing on top of the crowd.

Finishing off his show with ‘Machine Gun’, Yungblud left us wanting more, thirsty for his next album release.

Reviewed with pictures by Skye Sampson