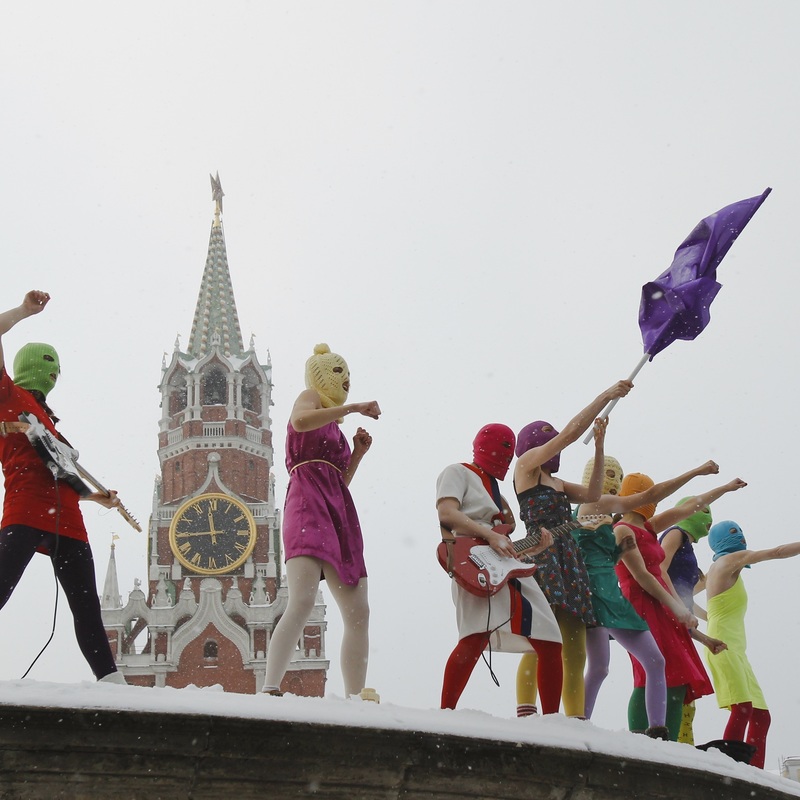 The RCC pulled together quite a line-up for the principal gig of their Fringe program. Originally announced as original members of Pussy Riot re-uniting for the first time, (a major coup in itself) we then had the additions of Yothu Yindi, Rev Billy & the Stop Shopping Choir, Cash Savage & the Last Drinks and Ecca Vandal – the event turning into a mini-festival.

It was an excellent line-up offering an eclectic collection of sounds and experiences but all held together by a common thread of political activism in various forms. The extensive line-up also meant that the scheduled 7pm to 10pm timing was never going to work. Even the advertised after-party, due to begin at 11, was also blown out, with the event going through until 12:30am.

Being a lengthy event of differing musical styles, it could have been a disjointed affair. But using New York’s anti-consumerist preacher Rev Billy as an MC over the evening ensured that this wasn’t the case. Billy and his Stop Shopping Choir started off the evening with a short performance piece, reappearing throughout the show (both with and without the choir), where he related tales, such as their less-than-welcome intervention at the Adelaide 500, testifying against the evils of burning fossil fuels. The messages were punctuated by ‘gospel’ songs from the lively, colourful choir.

The first band of the night was Melbourne’s Cash Savage & the Last Drinks. With an excellent, clear sound and an atmospheric set of songs (somewhere between The Bad Seeds and The Pixies), the performance provided an appropriate entry into the night’s proceedings. Along with some excellent musicianship, the band’s defining feature is Savage’s powerful voice.

The last time I saw Ecca Vandal was as a two-piece on small stage. Seeing her perform with an extended band in a space like this demonstrated how much she belongs in such a setting. It was a high energy performance from start to finish, earning an enthusiastic response from the crowd. With the band firing off riffs and penetrating rhythms – you can hear quite disparate influences in the music that knits into a unique and satisfying sound.

Yothu Yindi provided the night’s highlight – and it’s not often that you can say that about a support act. At the finale of their set, members of all the other acts on the bill were invited onto a crowded stage to join in with ‘Treaty’. Yothu Yindi’s line-up may have changed but the power of this seminal song remains when they play it live – despite the sad reality that the song’s central demand remains unfulfilled thirty years on. To have artist from all over the world singing along, including members of Pussy Riot from Russia and the Stop Shopping Choir from the US, was a moving and powerful moment in a night that was all about challenging the status quo and pushing for political and social change.

As a band, Yothu Yindi was in fine form throughout their set. Although Dr Yunupingu is missed, his presence remains in the music and lyrics the band continues to perform. It was just so great to have them on stage again – let’s hope this is more than just a one-off!

At the start of the Pussy Riot headline slot, their manager appeared on stage to provide some context – which certainly helped to engage with the performance, particularly for those who had not previously experienced the group’s theatre show, Riot Days earlier in the week at RCC. Pussy Riot are not a band in the conventional sense but a collective of political activist musicians with a fluid line-up of members. The performance included four Pussy Riot originals, but they only all shared the stage for a brief part of the show.

The set happened in three parts. The first sections was a performance art / street theatre piece to atmospheric saxophone music put through some electro-looping. The meaning may have been a little lost but it certainly broke through any pre-concenived notions from the audience about what they were here to see.

The middle section of the show was a conventional punk rock set. It was the most enjoyable part, involving all the Pussy Riot members in varying degrees and backed by a local backline of musicians doing a fine job. It was here that the signature balaclavas came out. The strains of “We are Pussy Riot” and “Anyone can be Pussy Riot” rang true – an invitation to activism from those who have certainly put themselves at risk for the sake of the cause.

Things then took a different turn in the final piece where the Pussy Riot keyboard player finished off with a solo EDM set backed by a film images in the background. Given the late running time, the crowd had thinned out a bit by the time the show officially ended. However, founding member (and formerly imprisoned) Maria Alyokhina then appeared to announce that the after party would still go ahead and she would sign anyone’s book.

It was a powerful night reminding us about the powerful nexus between music and activism – and the kind of moment that is unlikely to ever be repeated. David Sefton and the RCC should be applauded for bringing it all together.