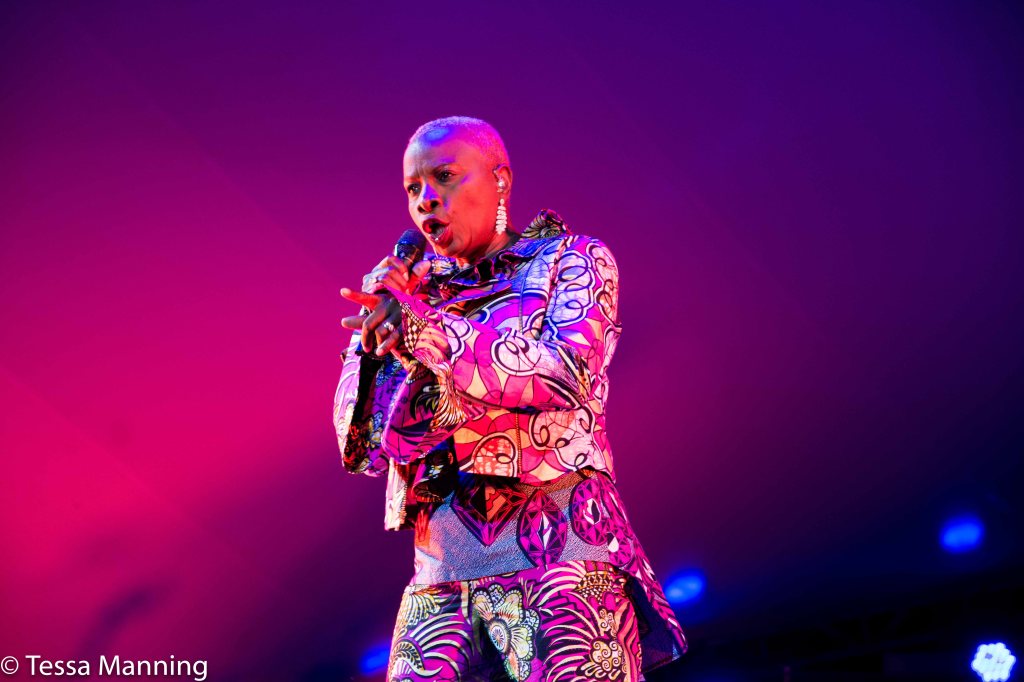 Day Three of WOMADelaide 2019 could not have had a more apt start than having 5Angry Men’s, The Bells, tolling through the trees as the lead in to the Central Australian Aboriginal Women’s Choir taking up position on the Foundation Stage.

This unique choir delivered a set of Lutheran hymns, and other sacred songs, sung in some of the oldest languages in Australia, Arrarnta and Pitjantjatjara. The large, appreciative crowd sat transfixed by the wonderful harmonies of these impressively attired women before being asked to stand to be given a brief singing lesson, where we were all taught how to sing ‘Kumbayah’ in one of the true languages of this country. The subsequent sound of thousands singing along was a very moving experience.

Following the choir, on Stage 3, Gambian kora virtuoso, Sona Jobarteh and her band delivered a wonderful hour of music that soared on a bed of amazing percussive rhythms. Jobarteh wove the intricate sound of her 21-stringed instrument through a well-balanced set of up-tempo and more gentle pieces, clearly loving the interplay with her tightly drilled band. She also proved to be a very accomplished acoustic guitarist. Her set was possibly the most exhilarating performance of the weekend to date. 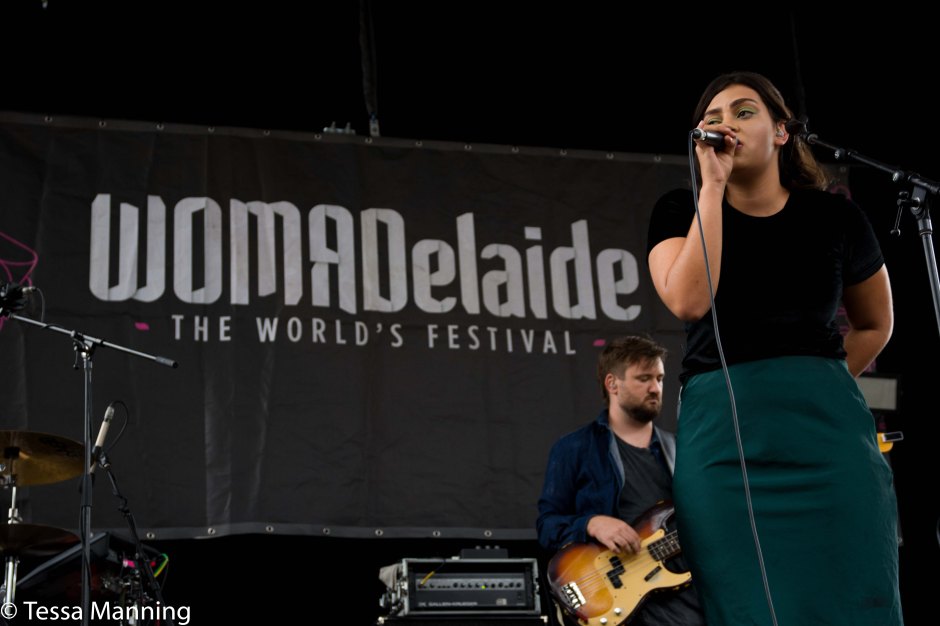 Meanwhile, a large crowd packed out the smaller space at the Novatech Stage for Thelma Plum. A more prominent timeslot and bigger stage would certainly have been better for this set. Thelma delivered a stellar performance to a huge audience who enjoyed her funny stories and beautiful songs. Playing a selection of new and old stuff, splicing in personal stories and quips about each song, Thelma showcased her exceptional songwriting, which makes the wait for her debut album seem even longer!

Back at the Foundation Stage, The Silkroad Ensemble proved to be a completely different listening experience. Opening with a plaintive bagpiper duetting with an Eastern piper quickly declared that this performance was to be all about integrating as many diverse musical cultures and traditions into the performance as possible. Musicians from at least eight different nations took turns in various combinations of instrumentals and songs to paint the Ensemble’s unique aural canvas. Once you had adjusted to the pacing of the music, it was easy to accept the Ensemble’s invitation to close your eyes and travel their world in your mind.

Iranian born, Perth based singer Tara Tiba offered a unique listening experience over at Stage 3, fusing Persian culture with jazz while covering everything from ancient traditional songs to Alanis Morissette. She has a great voice and a warm stage presence, backed by a talented trio who are afforded plenty of solos with some excellent musicianship on display.

Later in the afternoon, the Sharon Shannon Band, one of Ireland’s most dynamic folk outfits, delivered a set full of sonic highpoints. Beginning with some fairly traditional Irish jigs, with the ex-Waterboys member Shannon sitting centre stage and playing her accordion with unbounded joy, the band then took many unexpected musical digressions – amongst them a lovely version of Bob Dylan’s ‘Don’t Think Twice It’s Alright’, a sudden shift into heavy metal with Deep Purple’s ‘Smoke On The Water’, and a final track that moved seamlessly into the Penguin Café Orchestra’s ‘Music For A Found Harmonium’. Perhaps the biggest surprise of all was a guest spot from Susan O’Neill, a young woman who came on to play trumpet accompaniment on one song. She was then invited by Shannon to sing two songs, and the gravelly roar that came out of such a young soul stunned the crowd. Her version of the Janis Joplin classic version of ‘Piece Of My Heart will be hard to forget for all those who witnessed her stunning vocal power.

The 6pm slot threw up some difficult choices with the Triple J inclined crowd split between Tkay Maidza on Stage 3 and Julia Jacklin at the Novatech Stage. Jacklin delivered an impeccable set of brooding songs for the packed in audience under the bats. She has a beautiful voice with a genuine capacity to convey an emotion while switching between strength and vulnerability. She also writes a great song. Backed by an excellent band who effectively used dynamics throughout the set, Jacklin was disarming and engaging. 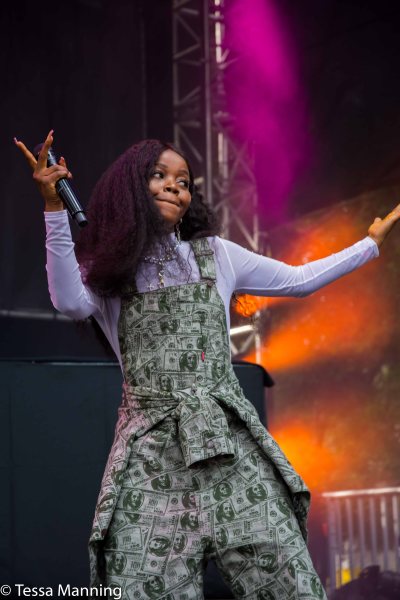 At such a young age, Adelaide’s own Tkay Maidza is taking the world by storm and she absolutely owned the stage at WOMADelaide. Her energy was infectious, her music is contagious – if you haven’t caught the Tkay bug yet, do yourself a favour and see what all the hype is about. She had almost the entire population of Stage 3 jumping as she danced vigorously, belting out adorably Millenial lyrics (about such things as texting and Facetiming). A fabulous set by an impressive young woman whose star is on a very rapid rise

At the same time over on Stage 2, Maalem Hamid El Kasri and his band of merry backing vocalists offered up another surprise performance. The Moroccan master of the guembri – a three stringed bass lute – would, in terms of Western musical equivalents, be something akin to a mix of Larry Graham, James Jamerson and Tony Levin. The groove he struck on his odd looking instruments – they looked like they had been made out of tea chests and other timber offcuts – with his drummer matched the power of any rock rhythm section you could name. El Kasri has a rich and expressive voice and this worked well with his four backing vocalists who looked impressive in their traditional robes. They also played what looked liked egg poachers as castanets, creating a sound akin to the knight’s horses in Monty Python’s Holy Grail film! Whilst it sounds comical the sound was infectious – as was the unrestrained joy of the performers.

With the chairs cleared away from the Frome Park Pavillion, the ‘conversation’ tent became a performance space for local artist Adrian Eagle. The SA Music Award winner is a delight on stage, performing with his heart on his sleeve and taking genuine joy in the experience. Eagle has an incredible range and a striking voice, showcased through his own material and a reworking of his contribution to the Hilltop Hoods single ‘Clark Griswold’. He is also mindful of his roots, singing about SA, his childhood and growing up on a Housing Trust estate, and proudly proclaiming that he is Adelaide born and bred a number of times during the set.

Behind the tent in Frome Park, Olivier Grossette’s Ephemeral City had finished construction after two days of work from artist and crowd working in collaboration. This incredible tower of cardboard boxes is quite something to behold, reaching quite a height – but it all comes down today.

I am not sure anyone was quite prepared for the manic power of South Africa’s BCUC who invaded the Foundation Stage in the first of the evening slots. Their instrumentation was two bass drums, a set of congas and some whistles. Their energy was limitless as they drummed up a hurricane of noise. Whilst the female vocalist had a pure and perfectly pitched voice, she was often subjugated by the snarling, roaring scream of her male co-vocalist. Many people in the crowd seemed to enjoy the nature of the performance, letting their own inhibitions hang out, leaping and yelling as much as the performers on stage.

Moving back to the Stage 2 area proved quite difficult as a large crowd had gathered to see Germany’s Shantel & Bucovina Club Orkestar play their hybrid of classical European styles, ska, reggae and electronica. The ensuing set saw a frenzied crowd response as Shantel and his hard working band left nothing in the tank as they worked their ‘disco’ magic. Surprisingly, as if by osmosis, most of the crowd seemed to know the choruses of most songs and were only too keen to add their enthusiastic vocal support whenever the chance arose. There is something really empowering about seeing music fans of all ages – some well into their advanced decades – pogoing like crazy on demand! The energetic choreography of the brass section, the rock posturing of the bass player and Shantel’s constant inciting of the crowd to keep the energy level at maximum all combined to create one of the weekend’s most enjoyable sets. 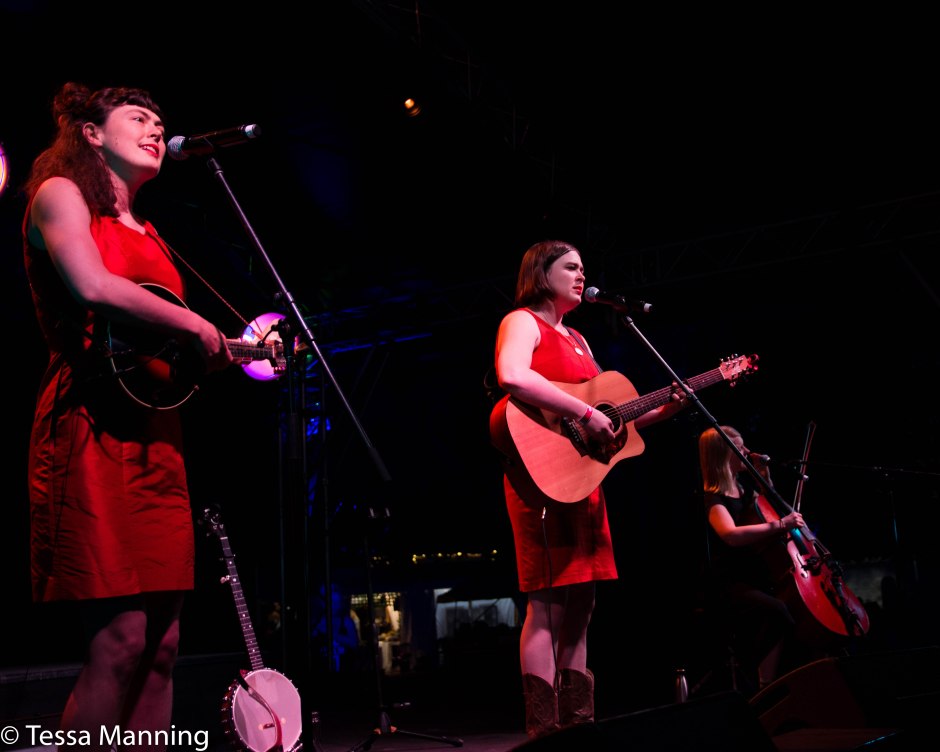 It was a very different atmosphere over at the Moreton Bay Stage where sibling act The Maes delivered some folk magic for the seated audience. It was a simple set, the two sister on guitar and mandolin, backed only by a cellist. The minimalist arrangements served to highlight the duo’s stunning harmonies, which were quite something to soak in under the trees on a perfectly temperate evening.

The anticipation for Angelique Kidjo’s revisitation of the classic Talking Heads album Remain In Light had been building all weekend and had been the topic of choice in many conversations – had and overheard – throughout the festival. The original album had been released in 1980 and was heralded as one of the first mainstream Western recordings to work Afrobeat rhythms into the rock music format. Kidjo’s reinterpretation of this ground-breaking music is her attempt to bring the music full circle back home to its roots. Placing it in the context of our current culturally fractured world, the singer aimed to encourage us all to ‘remain in the light’ and not to succumb to the political darkness threatening us all at present.

Light rain had begun to fall when Kidjo took the stage just after 9pm but nobody moved as she immediately started to entrance us all with an unforgettable set of strangeness and familiarity in equal measure. What followed was a ‘world of light’ in which Kidjo ‘opened our eyes up’! Kidjo also found room for her own songs amongst the Talking Heads covers and these songs, and the political messages they contained, fit into the overall mood perfectly. Her celebratory rendition of her song ‘Mama Africa’, which in this performance included a crowd walk and a brief guest appearance from Fatoumata Diawara, was carried on a wave of euphoria and rapture as the crowd responded with gratitude and pleasure.

The astonishing recreation of the complexities of the rhythms in the Remain In Light material, provided a muscly angular backdrop for the mixing of African lyrics and bursts of David Byrne’s impressionistic lyrics to convey completely new ways of understanding these songs. ‘The hands of a government man’ in ‘Born Under Punches’, for example, became much more sinister, as the final refrain of, ‘all I want is to breathe’ became all the more poignant. This process was repeated for each of the Talking Heads tunes in the set, the effect of which was perhaps summed up in Byrne’s prophetic words which now seemed to describe this performance specifically: ‘The world has a way of looking at people Sometimes we feel that the world is wrong. She loves the world and all the people in it, She shakes ’em up when she start to walk…’

It was an astonishing performance that summed up the whole mantra of WOMADelaide in ninety minutes – reinforcing the fact that music is our most potent unifying force.