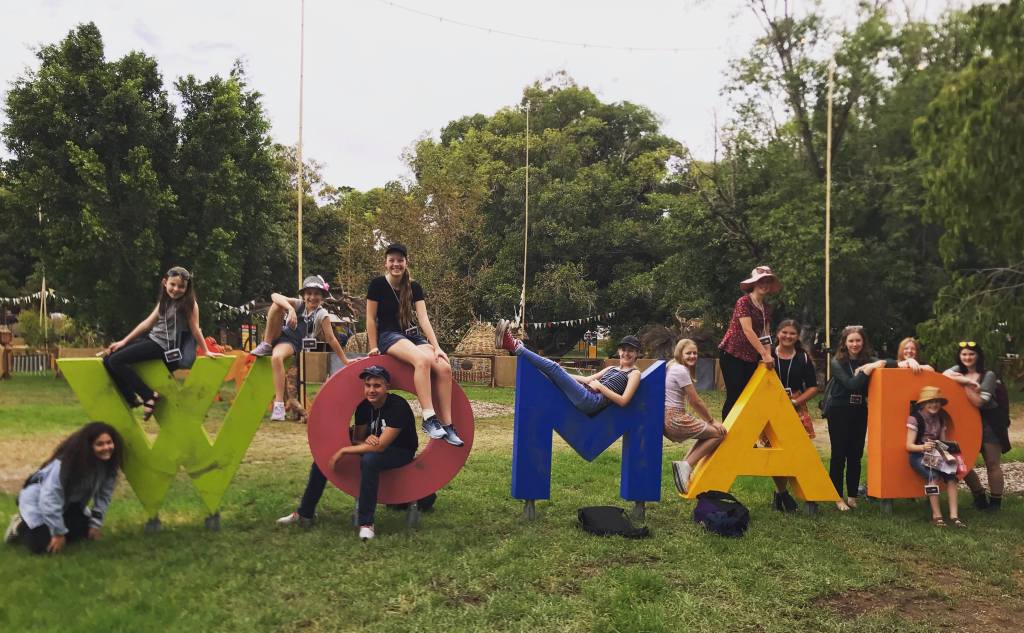 WOMADelaide celebrates art, dance, and music, three of the most important things in modern day culture around the world.

On the 8th of March the Expressions Media Headliners team had a sneak peek of WOMAD, and got to watch both Las Cafeteras, BCUC, and Arrived before having a chance to interview the artists.

Here’s how the day went for some of those 13 Headliners graduates:

BCUC is a seven membered band from Soweto, South Africa. They are a band that can continue moving and singing for hours on end.

We also had time to talk to Las Cafeteras, a band that plays traditional Mexican folk instruments and borrows inspiration from rock, hip-hop and rancheros. Hector Paul Flores was happy to talk to us about what he would play if he were to choose another genre of music.

“We didn’t choose [our name], the community chose it for us. We used to play in a place called the East-Side Café, then we became The Cafeteros for the café. But the women in the group were like, ‘Hey, hey, hey we’re not the Cafeteros were the Cafeteras,” Hector says.

She spoke of her journey to becoming the artist she is today and how she overcame her obstacles.

When the group started to perform professionally it was important for Denise to stop thinking she was an imposter in the world of music.

“This was an opportunity and an offering that the universe has given me to say you have something to say, all of us do, take advantage of it because there is somebody out there that needs to hear what you have to say,” she says.

The group gave out such a positive message and it was amazing to see such a wonderful female leader showing her talent and speaking her voice for the people who don’t get a chance to do that.

For a while they were known as The Cafeteros as that is where they came from but Denise says that changed due to the women in the band.

“For us, it was really important to honor the feminine because we all come from women and we all go back into mother earth and so the men… had this discussion on what it means to honour femininity in themselves and we became Las Cafeteras,” she says.

On International Women’s Day it was amazing to see such a positive feminine vibe being brought to WOMAD and the bands performance was amazing to witness and something definitely deserving of being a part of this festival. By India Austin.

Zithulele ‘Jovi’ Zabani Nkosi or Jovi as a nickname is performing with his band BCUC at WOMAD on Friday night and Sunday night.

“It reminds us of what we need to do in life,” he says.

They mostly sing in the languages Zulu, Sotho and English because he speaks Zulu and the rest of the band speaks Sotho.

After WOMADelaide, BCUC will be heading to New Zealand to play and then South Africa.

On Friday the 8th of March I went to WOMADelaide for a whole day when it was closed!

We were counted as media and I did a lot of photo taking. First we went to the Frome Park Pavilion for the media conference.

There was a beautiful Welcome to Country with a didjeridoo and everything!

After that, we saw a singing and dancing sensation called Las Cafeteras which everyone enjoyed. Then we saw BCUC and I spoke with a member of the band Canzoniere Grecanico Salentino. Afterwards we had a tour of the grounds.

Hours before opening, the atmosphere of the park was vibrant and bustling with uncontained excitement.

The high-energy performances, eager crowd, and lively décor of the park captured the true atmosphere and core ambience of the festival.

The thrill of anticipation hanging in the air sent performers into overdrive with contagious enthusiasm, electrifying all with excitement for the weekend to come.

Las Cafateras produced a culturally infused tribute to Los Angeles and their homeland of Mexico.

The high-energy and eye-opening act of BCUC set a dynamic tone for the weekend to come.

Arrived perplexed and excited viewers with their unorthodox performance style (untypical lack of dialogue), calling those attending to experience the hidden gems of WOMADelaide.