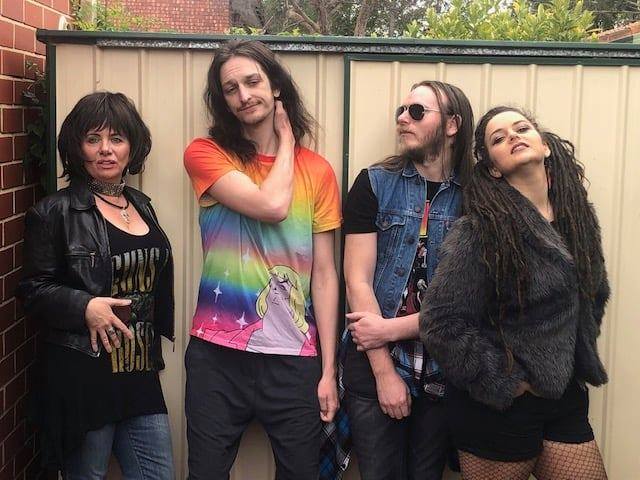 Written by (and starring) local multi-talented cabaret performer and producer Louise McCabe, The Runner Up is set to win first place in our hearts this month.

Playing as part of Back2Back Festival at Star Theatres, The Runner Up follows the plight of hapless, but ultimately loveable, Cyn in a substance-soaked black comedy about a fabulous loser and her young band’s long way to the top.

Having won the Audience Pick award in Mullumbimby’s Hot Shorts Competition in 2017, the show had a highly successful run at the 2019 Adelaide Fringe and is playing on 19, 26 and 27 October.

Describing the show as part Spinal Tap/Flight of the Concords and part journey of an anti-heroine,  Louise wrote The Runner Up as a tribute to the one hit wonders of the ’70s and ’80s.

“As a teen growing up in the ’80s, I was obsessed by music and rock stars; I started out wanting to be a rock journo before deciding to be an actor. The idea to play an ageing rock chick came to me a few years ago when i was listening to a play list of my favourite rock chicks,” she says.

“I was also fascinated with the whole music talent reality TV show [genre] and what that meant for music and the obsession with instant fame that it was breeding, as opposed to touring, making mistakes on the road, and really learning about performing the old way. The Runner Up is about looking for fame, almost finding it, losing it – but ultimately it’s about the joy of performing and the relationships that come through it. I’m really proud of it, both as a show and a piece of writing. It’s got a great story, real, relatable characters in uncomfortable, cringeworthy funny situations. And Cyn is the most fun character I’ve ever played.”

With hits from legendary ’70s, ’80s and ’90s rock chicks performed live by some of Adelaide’s hottest musicians, this hilarious rock comedy has a punch line you won’t see coming.

You can win a double pass to The Runner Up‘s opening night (Saturday 19 October)  by telling us in the comments what your favourite one hit wonder is and why.

Competition open to Adelaide residents only – please only enter the competition if you are able to attend the show on opening night.

The Runner Up is presented by Guilty Pleasures Shows, and is part of The Back2Back Festival at Star Theatres, 145 Sir Donald Bradman Drive, Hilton, on Saturday 19 and 26 October at 7.30pm, and Sunday 27 October at 4pm.