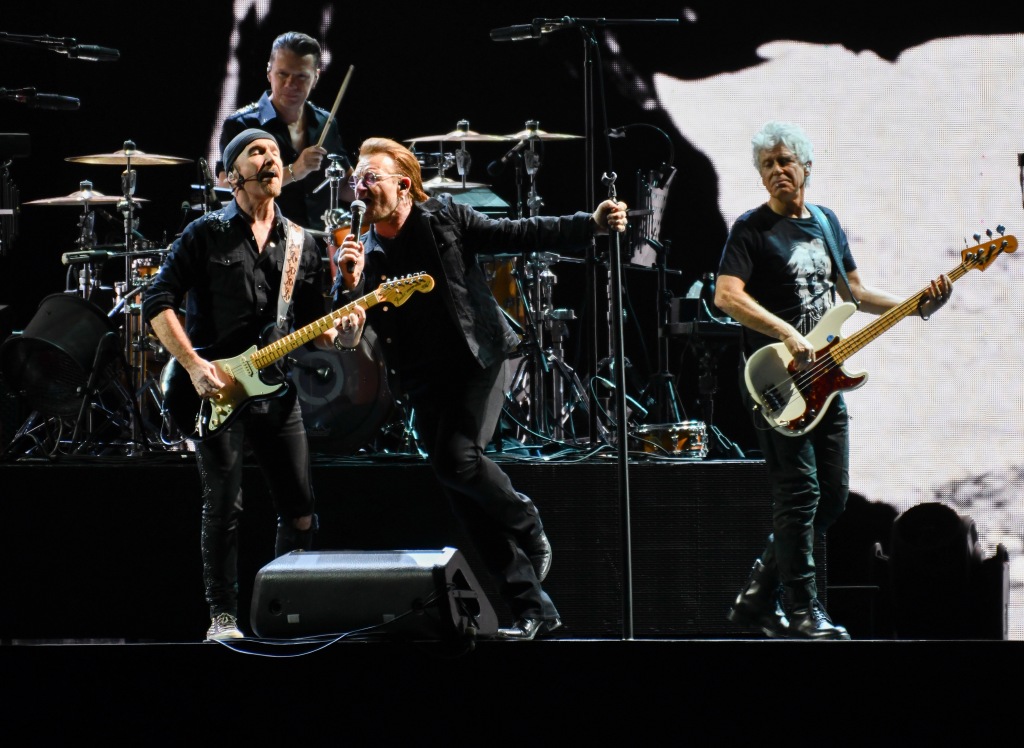 U2 never actually toured their career defining album, The Joshua Tree, in Australia. By the time they were here in the late eighties, Rattle and Hum was out and The Joshua Tree tour had become the Love Town tour (which brought along the late B.B. King for the ride). The quartet is now righting that wrong, revamping the album’s 30th anniversary show that toured other parts of the world a couple of years ago and finally giving Australian audiences the chance to hear what is arguably their finest and most acclaimed record played live and bookended by a selection of career-spanning songs.

Noel Gallagher’s High Flying Birds were in support, a choice that worked well and very much suited the crowd (far more congruous than Kanye who supported the band’s last visit to Adelaide). There wouldn’t be many bands in the world that someone as renowned as Gallagher would play support to, but he understood his role and delivered a crowd-pleasing performance, backed by a strong group of musicians. It took a little while to warm in. Gallagher arrived on stage in black polo and jeans and devoid of any rock star posturing. If you passed him in the street, you wouldn’t look twice. But as the set moved on he chatted more freely and engaged the audience in the performance; he was characteristically cantankerous and often very funny (there was even a gag about playing Adelaide – he thought he was fronting up to an Adele festival).

Beginning with his High Flying Birds material, it was evident that Gallagher still writes a great song, adorned with pleasing hooks and all backed by a rocksteady beat. He teased with the idea of venturing into Oasis territory early in the performance only to play more solo material but, with a canny understanding of what the punters want, he switched to his former band’s songs in the second half of the set, with the audience responding enthusiastically and singing along. ‘Wonderwall’ was understandably a favourite, introduced with a wry observation that the song almost lifted him to U2 levels of stardom but not quite. It was its follow up, however, that was the standout, with the crowd belting out the chorus of ‘Don’t Look Back In Anger’. The act then wrapped up in a nod to Gallagher’s most evident musical antecedents, while making great use of the band’s brass section and backing singers, with a cover of ‘All You Need Is Love’.

Ever since their Zoo TV shows of the Achtung Baby era (which eventually landed in Australia in 1993 as the Zoomerang tour), U2 have always delivered an audio-visual spectacle, with a concert experience that really is like no other act. But with a capacity to go over-the-top, this can also be the band’s Achilles heel, with a danger that the visual experience can overwhelm the musical one. For this show, they have managed to blend in enough restraint alongside the spectacle to get the balance right. Dominating the performance was the largest screen ever used in a touring show, with amazing resolution, this was completely immersive. But it was the way this feature was used that made the concert such a success. In previous incarnations, this might have been an exercise in ego, focussed on larger than life projections of the band themselves, but here we were treated to bespoke film footage by Anton Corbijn (who did the original Joshua Tree band shoot in 1987) that really enhanced the songs. While at other times, the visuals dropped away and we were reminded that, for all the spectacle, this is just four guys who make music together and have been since they were teenagers.

This was how the show began, with dummer, Larry Mullen Jr walking to the B stage at the centre of the arena and starting the distinctive drum beat for ‘Sunday Bloody Sunday’ before being joined by his bandmates. As a song that the outfit dropped from live shows for many years, it was a strong choice to open. Playing in the round, this was early career U2 without the pyrotechnics and highlighting the energy that made them a success before The Joshua Tree changed everything.

After four songs in this fashion, the screen lit up and the show began its track by track rendering of the 1987 album. Beginning with red dawn to accompany the opening strains of ‘Where the Streets Have No Name’, the backdrop gave way to black and white footage of a moving road in a desert landscape on the main stage with the band silhouetted in front of this. This was simply stunning: standing in the middle of the arena, the screen took up your entire vision and you really felt like you were moving along with music and really complemented the searching tone of the song. And for each number the visuals changed, making for an absolutely arresting experience.

Side A of the original record is packed with hits (and some of the band’s best work), making this the best stretch of the show, with ‘I Still Haven’t Found What I’m Looking For’ and the plaintive ‘With or Without You’ following up.

The album presents the band’s complicated relationship with America: sometimes celebratory, at other times acutely critical. The latter was on full display in ‘Bullet the Blue Sky’, a song that is still performed with a righteous anger at inequality.

‘Running to Stand Still’ brought this section to a close, in a beautiful rendition of an underrated song. The chance to hear numbers like this (that might not otherwise make it to latter career setlists) demonstrates the real value of these album-in-full performances.

Admittedly the energy did dip a little next with ‘Red Hill Mining Town’ which completed Side A (the point where you would “turn the cassette over” as Bono reminded). With The Edge playing keyboard, the song was missing the bright, jangly guitar arpeggios he contributed to the recording. But with bassist Adam Clayton sitting casually aside the drum kit for this one, perhaps band and audience did need a more chilled out moment to catch our collective breath.

There were more gems to follow as the show moved into the lesser known Side B of the LP. It was a fine opportunity to hear these songs live and rediscover them all over again. The highlight here was the apocalyptic ‘Exit’, with great dynamics and delivering a sharp rebuke of Trump’s politics, before the moving album closer, ‘Mothers of the Disappeared’, with Bono honouring the grieving women on screen whose candles were progressively extinguished.

The set reminded us why The Joshua Tree was such a seminal album: passionate, evocative and a great collection of songs.

From there, the band ventured back to the centre stage to show us “what came next”, with a stripped back rendition of ‘Angel of Harlem’ to finish the main set.

As an audience member, it is always appreciated when a band comes back for an encore, but even better when we don’t have to beg for it. The days of calling the band’s name for 10 minutes are definitely over and U2 re-emerged to give us ‘Elevation’, ‘Vertigo’ (with swirling visuals on the screen that almost left you with vertigo), and ‘Even Better Than the Real Thing’.

‘Beautiful Day’ was an absolute highlight that saw a sea of smiles and hands waving, but ‘Ultraviolet (Light My Way)’ was one of the most moving moments of the night. Bono acknowledged the women working on the tour and images of women of note were projected on the screen, including Sia, Hannah Gadsby, Nova Peris, Cathy Freeman and Greta Thunberg. It was a genuine show of respect that honoured great women from the past and present. Many of us (particularly Libby) were moved to tears.

‘One’ closed the night and was a fitting end to an exceptional concert from a band that has maintained its ability to bring a stadium to life with the incredible music they’ve created over a remarkable career.