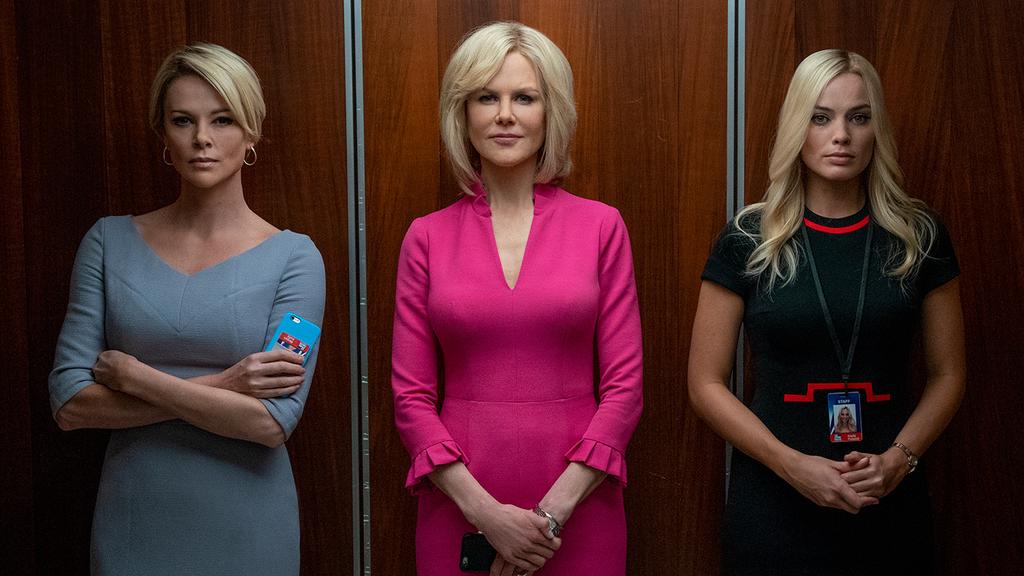 Bombshell from director Jay Rouch, is a biographical drama following the story of the downfall of Fox News founder Roger Ailes after sexual allegations were filed against him. Whilst not the first on-screen adaptation of this story, Bombshell puts its women to the front, driving the narrative and delving into the complexities of being a woman dominated by men where part of the job description is selling yourself and proving loyalty to the man.

Bombshell is led by Charlize Theron as Megyn Kelly, Nicole Kidman as Gretchen Carlson and Margot Robbie as fictional character Kayla Pospisil, an amalgamation of other Fox women who came forward with allegations. Kidman delivers one of her best performances as Carlson, with her character portrayal shining after the lawsuit is filed and she waits and trusts that other women will come forward. Theron’s portrayal of Kelly, along with getting her an Oscar nomination for Best Actress, is strong, honest and shows an extreme depth while she navigates her own morals and persona as a conservative television personality, providing background into the way her public discourse with Donald Trump impacted her family life and marriage. Robbie’s Pospisil, which also got her an Oscar nomination for best actress in a supporting role in many ways serves as the balance amongst the female leads. Carlson and Kelly are strong and experienced, whereas Pospisil is green, young and falls victim to Ailes not knowing that she has any power of her own. All three performances are incredibly raw and earnest.

John Lithgow’s Roger Ailes is brilliantly sickening. There is arrogance and entitlement that he captures perfectly and this is displayed through his matter-of-factness when asking his female employees to prove their ‘loyalty’ to him. Deceptively clever, Lithgow makes your skin crawl with the uncomfortable subtly in his actions that make him an even more formidable predator. Rouch creates a feeling of vulnerability and inevitability, not just in the women he chooses to harass or assault, but in the ways he twists the women to compete with each other so that no woman will want to hear or feel safe sharing what happens behind his doors for fear of what it may mean for them. Theron, Kidman, Robbie and Lithgow are supported by an incredible line up of actors like Kate McKinnon, Allison Janney, Connie Britton and Malcolm Dowell to name a few.

What helps this film succeed, despite its dramatisations, is the clever integration of real footage throughout the pivotal story points. What also adds value is Rouch allowing experiences of each character to have their time where the punch comes the hardest. He changes narrative from first person monologues to third person interactions in a particularly clever way, allowing viewers to remain both objective to the story and emotionally attached to the characters. His clean navigation of a messy subject perhaps can be attributed to his experience with political films such as Recount and Game Change. The choice of screen writer Charles Randolph to create a fictional character as a lead, Robbie’s Pospisil, is an interesting but ultimately smart one. The fact that her character is built from multiple women’s stories and recounts of Ailes gives it more depth and even more anguish and outrage.

Bombshell joins the growing collection of against the Hollywood status quo female driven film refusing to shy away from storylines that make viewers uncomfortable or sexing it up to ensure it sells. It handles the myriad of complexities of sexual assault allegations superbly and with honest hands, especially when, until the lawsuit this film follows, women were almost expected to comply to ensure they progressed in their careers. It forces its viewers to recognise silence being complicit and tacit acceptance of toxic sexism, holding both Kelly and Carlson to account for the damage their silence allowed to continue, not just from other allegers but also the women showing blind support for Ailes.

Stories like this being told on film are important and need to be executed well to have power, Bombshell does just that. It’s not always palatable, it will make you angry and demonstrates clearly that women shouldn’t need to give a little head to get ahead. Politically charged and unapologetically raw, Bombshell is a hard hitting must see and a blueprint for how stories like this should be told.