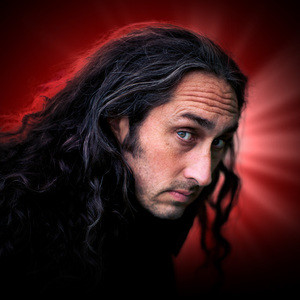 A Jesus-like inflatable head and hands inflated to signal the starting of the show, complete with a sign language translator.

Noble is either very clever with planting people in the crowd for his jokes, or he is just brilliant at improv. It was so hard to tell which skits were planned and which were off the cuff, but either way it had the crowd in stitches.

Noble manages to tow the line between making non-PC jokes and poking fun at PC culture at the same time. For numerous gags, the translator had to sign out as though she was really saying the punchlines and the silly signs for certain phrases (monkey tits, for example), were educationally hilarious.

As with many stand up comics, there were tangents mentioned at the beginning of the show that were circled back to at the end to wrap things up and the structure of the show was well put together.

Some skits could have been cut shorter and seemed to drag for too long, but all in all it was a riotous night of laughs.

Whether it’s your first time seeing Noble or he’s a regular on your Fringe schedule, it’s a show you can definitely rely on for a few laughs.

Ross Noble: 2021 Comeback Special is showing at the Cornucopia in Gluttony until Sunday, March 21. Get your tickets here.