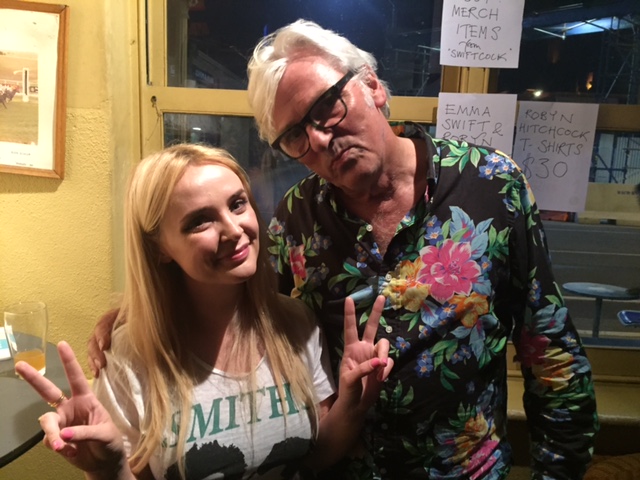 Robyn Hitchcock’s show at the Grace Emily on Thursday night was a homecoming of sorts. A quick scan of the crowd of devotees in the room made it clear that his fanbase – most who are now gracefully ageing! – are nothing if not loyal, with many familiar faces from his past Adelaide shows again fronting up for their latest instalment of surrealistic Hitchcockian surprise & delight.

Touring this time with the wonderfully talented Emma Swift, who also performed with him at last year’s Womadelaide, Hitchcock appeared relaxed and genuinely happy to be back in our town where he knows he has always had a strong dedicated band of supporters.

The evening began with Hitchcock announcing that the night was to be a celebration for Emma Swift’s birthday and that she would be performing a short set of her own to start off the evening’s proceedings.

Swift’s set was a revelation in a number of ways. Her pure, pitch perfect vocals were mesmeric and her between song patter appealingly witty and humble. Whilst the selection, collectively, was a tad mono-paced, and allowing for her own acknowledgement of her lack of guitar-slinger credentials when she self-deprecatingly joked about the simplicity of her playing, the quality of her voice and the lyricism of her own compositions ensured the performance was riveting. Finishing with a cover of Rowland S. Howard’s song Shivers – an enthralling interpretation – she had primed the crowd perfectly for her touring partner to come to the stage.

There is always a sense of high expectation when Robyn Hitchcock performs. His back catalogue is so extensive now, that it is almost impossible to predict what form his setlist will take. His Adelaide show showcased a range of songs stretching back through the years to include some of his oldest solo numbers. It was a satisfying selection, and after the show as we all compared notes, everyone who had made requests via his social media page seemed to be happy that he had included at least one of their preferences!

Songs such as 52 Stations, My Wife And My Dead Wife certainly elicited sighs of pleasure as smiles of recognition broke out on many of the faces around me, and Madonna Of The Wasps, Queen Of Eyes and a beautiful rendition of Element Of Light were very welcome set inclusions too.

Hitchcock had fun challenging the local sound tech to conjure up effects to compliment the mood and tone of many of his songs. His playful mood seemed best summed up by his decision to play one of his most whimsical numbers, a great version of The Cheese Alarm, greeted with much joy by the faithful.

Hitchcock’s voice was in great shape, and his meandering between song narrative rambles were not as evident during this show as they have been in past performances, as he tried to fit in as many of his classics as possible.

I Often Dream Of Trains was magnificent, as was the upbeat Goodnight Oslo album track, Saturday Groovers, but the highlights for me were his duets with Swift. Their harmonising on Glass Hotel was sublime, and this night’s version of their latest single, Love Is A Drag was another transport of delight. A surprising effect of singing with Swift was that it brought out a previously unheard, more ‘technically correct’, dimension in Hitchcock’s voice.

As always, when a gig has been hitting all the right touchstones and highpoints, the set seemed to finish too soon, but after a quick stroll to the front bar and back, Hitchcock came back on stage to perform a bracket of covers which included an impassioned rendition of Bob Dylan’s Visions Of Johanna and a fascinating run through of The Doors’ The Crystal Ship.

Calling Swift back into the spotlight they then delivered a wondrously delicate Nietzche’s Way followed by a heartfelt version of Just Like A Woman which finished off the night with a satisfyingly apt punctuation mark.

After the show, both performers were happy just to chat freely with punters at the bar as if catching up with old friends in an atmosphere of mutual respect.

What a life-affirming night out this was!