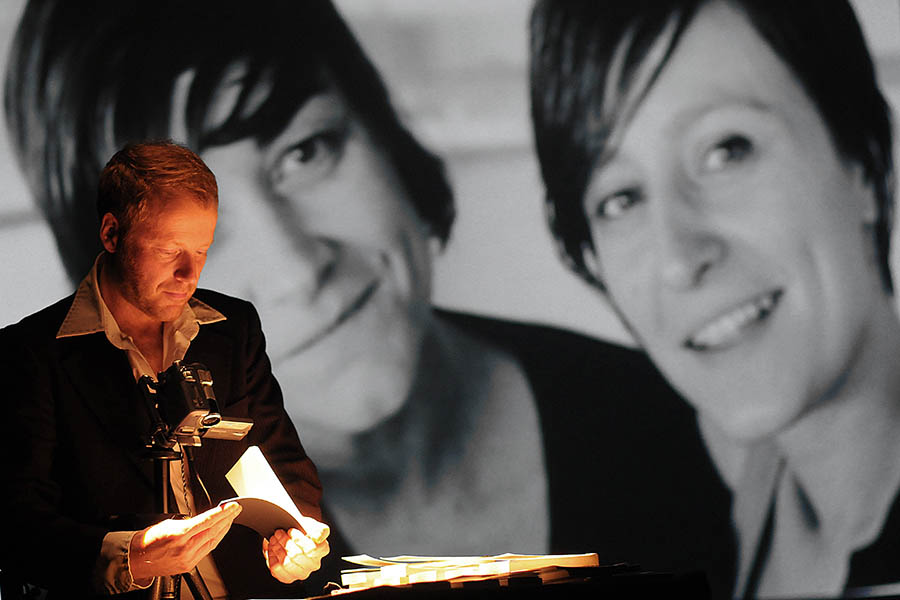 Since 2003, passionate creator of photography and intrepid traveller Volker Gerling has walked over 3,500kms throughout mainly his native Germany. On his travels he has met an abundance of people, some of which have agreed to have their photo taken.

Gerling’s photographic flipbooks (self-developed black and white photos on card bound on one edge) are presented in the stage show Portraits in Motion at the Radford Auditorium at the Art Gallery of SA as part of Adelaide Festival.

Using an old Nikon that takes a 36 roll of film in 12 seconds, Gerling is able to capture the truthful moments where people shed their photo-ready face and expose a beautiful and honest side of themselves. It’s a refreshing break from today’s filter-heavy and painstakingly crafted Instagram world of photography we live in.

The flipbooks, presented on a projector by Gerling, are captivating enough on their own. The simple act of flipping through the photos could easily be watched in silence. They are brought to life by Gerling, who tells stories of his encounters with the people featured in the flipbooks. Sometimes using their quotes, other times anecdotes on their lives, you are given an up-close and personal piece of each person.

There was a man who told him a story from his childhood he had never told anyone else before, an elderly man who simply wanted someone to sit and watch TV with him awhile and a woman who symbolically cut her ponytail while in a state of grief.

In between the flipbooks, Gerling told his own story, detailing his love of “going on his walks” combined with the development of his flipbooks over more than 10 years. In his words his show is a “gentle and thoughtful reflection about the fleeting nature of the moment and what it means when people meet each other.”

Portraits in Motion is deeply moving and at the same time light-hearted and mesmeric. You walk away with a sense of knowing the people featured in Gerling’s flipbooks. I urge you to go and see this simply heart-warming show.

Pick up tickets to Portraits in Motion here. It is showing until March 19.