John & Rick Brewster need no introduction to Adelaide music fans, and the reasonably large crowd at The Geman Club on Saturday night certainly were effusive in their appreciation of their heroes. By the time they finished their reverential tribute to Bob Dylan, the gathered multitudes awarded the performers a rabid standing ovation and induced them back to the stage for two encores.

It was a low key and, for the most part, static performance (surprise surprise, Angels fans!) but John Brewster’s intensity of devotion to the Nobel laureate’s canon, since having seen Bob Dylan’s Adelaide performance at the Palais Theatre in 1966, was clearly obvious. His arrangements and vocal phrasings were very faithful to the original versions.

After starting out with a plaintive solo run through of Love Minus Zero/No Limit, John was joined by brother Rick, who after taking a seat at the left of stage, kicked off a night of unobtrusive but always tasty contributions as they launched into a terrific Don’t Think Twice It’s Alright.

Onstage numbers swelled for Blowin’ In The Wind, as Angels’ drummer, Nick Norton, and Rick’s son, Sam Brewster, took their seats. The addition of Norton’s harmony singing fleshed out the songs from this point on, giving more depth and power to the choruses of songs where Rick’s voice would probably have struggled to carry these tunes alone.

Desolation Row was beautifully rendered, despite the gentleman next to me dismissively explaining to his partner what the song was called (in slow deliberate syllables), and declaring that it was a ‘long one where you could usually take a toilet break, or make a cup of tea…’ 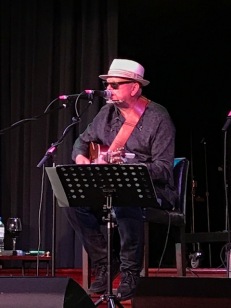 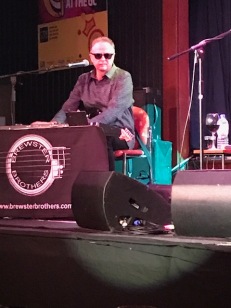 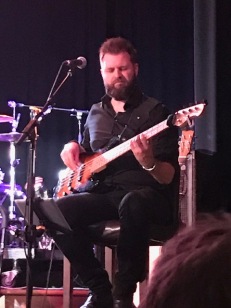 These ‘fans’ were both happier when the opening chords of Mr Tambourine Man rang out, whooping their appreciation as they were finally hearing one that they recognised.

I was particularly pleased to hear the band play two of my personal favourites in succession, It Takes A Lot To Laugh, It Takes A Train To Cry and I Want You. Both were superb.

Rick did spend a lot of time tuning up between songs and deliberating over which harmonica to use, much to the chagrin and mock embarrassment of his son, Sam, but overall, the positive family vibe was palpable and added to the appealing atmosphere the performance was generating.

The set pleasingly included a few lesser known Dylan tracks – Fourth Time Around and Shooting Star, for example – to confirm this was an aficionado’s set and not one built around the choices of a casual fan.

That’s not to say that crowd pleasers such as Just Like A Woman; Visions Of Johanna; It’s All Over Now, Baby Blue and Like A Rolling Stone weren’t welcome additions. They were, and they were all played with love and energy, to which the crowd reciprocated, as they basked in the familiarity of the songs and in the high quality musicianship with which they were played. 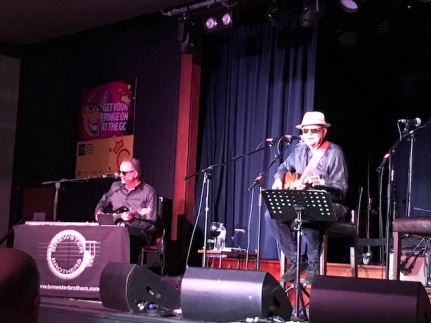 A powerhouse All Along The Watchtower rounded out the first encore, and Rick Brewster was finally given free reign to open up on lead guitar. He was so much ‘into the moment’ here that he did not hear Rick trying to get him to stop his guitar heroics and hand the limelight to the rhythm section so they could also showcase their soloing prowess!

After this fantastic rendition of that famous Hendrix-adopted Dylan classic, the crowd made it clear that they would not be appeased until the band returned to the stage one more time.

Now that the supply of pre-prepared Bob songs had been exhausted, the band responded by performing a Brewster Brothers original, the Dylan-tinged Blue Blood, originally from their 2006 album, Shadows Fall. It was a good choice on which to finish as it once again allowed the band to display its musical muscle.

After the gig was over, people were buzzing with that satisfied feeling you only ever get at the very best gigs. The band surely must have been buzzing too after getting such an animated reaction from their acolytes.

These local legends had certainly served their idol, a global legend, and their audience well.

The Brewster Brothers Play Dylan was performed at The German Club, Saturday 24 February 2018.