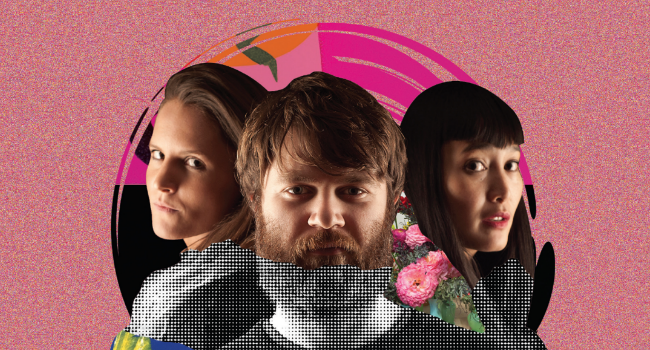 Melbourne art pop band, The Fix Ups, have just released their debut album, and despite, or perhaps because of its naïve musical simplicity, it’s a winner.

Whilst their songs are generally raw and unrefined, the band’s garage electronica and fuzztone devotion have combined to create a cool, detached homage to the late days of punk and the early days of electronic pop.

Think of the primitive nature of the debuts of bands who went on to achieve long, successful and inventive musical careers – Talking Heads, Suicide, Depeche Mode & Blondie come to mind – and The Fix Ups album does not seem too out of place on that list.

There is no finesse on display here, no pointless noodling, or any notes-for-note’s-sake virtuoso posturing, but there is a clearly evident sense of authenticity and a promise that this band have the right chemistry to evolve into something great.

The opener, Monkey Dance, encapsulates the earnest enthusiasm all good new bands have. It is built around a fuzzy and distorted riff over which Marlene Samson dispassionately intones. Her vocal seems, initially, to be mixed far too loudly, but then simple keyboard flourishes and Ash Meagher’s basic garage band drum sound kick in to complete the aural picture, and it all somehow works.

The Blondie influence is strong on the second track, Secrets. In fact, initially, it sounds like a mash-up of Blondie’s debut record and the first album by The Stranglers. Samson’s vocal is so Deb Harry-esque to the point where it almost risks becoming a parody, but the song has a core quality that insinuates its way irresistibly into your brain. It is, undeniably, one of the best tracks on the album.

The album’s only real misstep is on the third track, Fearless. This is, stylistically, an attempt at crooning lounge-pop, but it is devoid of the same energy and grit that emanates so strongly from the rest of the album. Here, the insipid guitar, the unconvincing vocals and the limping pace of the rhythm track render it a song that you know will have you hit the ‘skip’ button every time the album is played.

Thankfully the rest of the album is far more interesting and rewarding.

Mushroom Tea, whilst being a little too long, settles into its trance-like rhythm quickly, high hat cymbals to the fore, and reminds the listener of the endearing baby-steps of many bands who emerged in the early days of eighties Oz indie-pop.

Breathe is a surprising change of pace and direction. Reminiscent of June Tabor-ish English folk of the sixties, it has an almost pastoral feel, earthy and real, totally at odds with the rest of the album up to this point, but it works beautifully. This is why this band should be watched closely in the future. They are digging through a vast range of styles on this album, looking for a rich seam of innovative potential to mine.

There is more, raw acoustic strummery evident at the outset of War Affection, where The Fix Ups embark upon another stylistic exploration whilst not quite having the mastery of its form. This results in yet another song of intriguing possibility. It’s a moody, tantalizing piece, complemented by some appealing fuzzy guitar breaks from Nikos Shannon.

The penultimate track here, It’s Your Life, is a track that is, no doubt, destined to appear on some future compilation of Aussie underground tracks, maybe thirty years from now, and have everyone who hears it declare it a ‘lost classic’. It begins with an uptempo blast of staccato riffing, before the choral vocals begin – sounding very similar to the ‘Little Ladies’ from the cult seventies’ TV show Rock Follies – and  the song is propelled along frenetically by Meagher’s gloriously primal tub-thumping. This track is a terrific, 21st century style, garage rocker.

The album closes with Do What, a more sedate, dreamy number which drifts into some electro-reggae rhythms, and allows Samson to return to her vocal Deb Harry-isms. It provides an almost reflective end to the album – and the song’s title does encourage reflection on the question of what this band will do from this point on?

Let’s hope they do establish a following, do have sustained success and do continue to make real music that has the same level of integrity, playfulness and energy as this debut!

The Fix Ups self titled debut album is out now and available from their website.