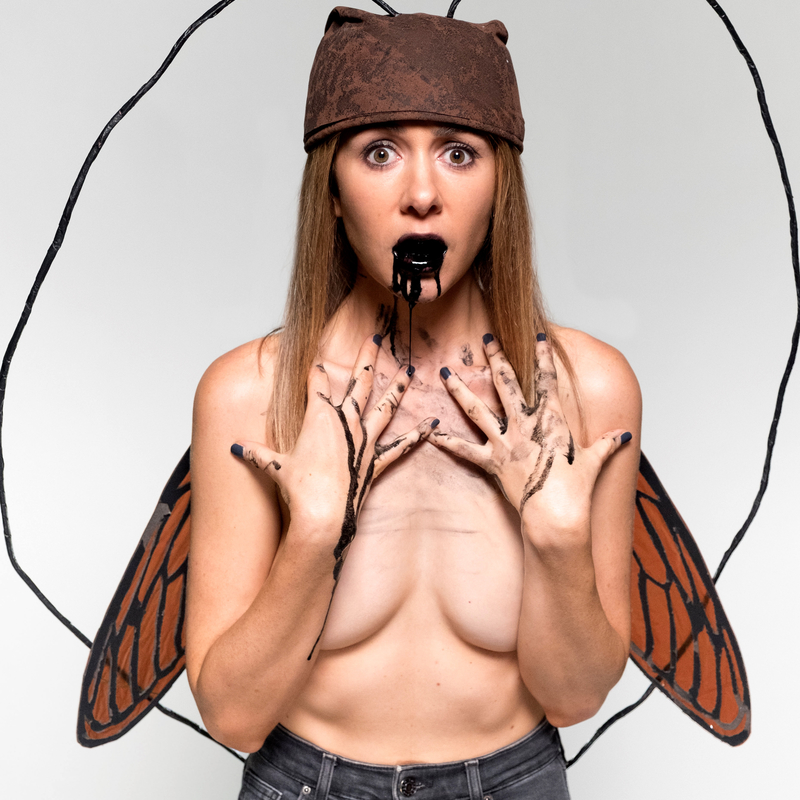 With the #MeToo movement gaining significant momentum over the last couple of years, as well as many high-profile sexual assault cases where the assailant has received a questionable sentence, it would seem timely for a performance piece around the culture of women’s rights and sexual assault. Cockroach is a show which tackles these topics head on, an unrelenting tale of revenge and violence using the backdrop of the #MeToo era to get its message across.

Held in the smaller Studio space at Bakehouse Theatre, performer Leah Donovan is the titular cockroach, transformed after a nightmare while in the throes of an abusive relationship. What follows is a re-imagining of Ovid’s Metamorphoses, where Donovan’s cockroach takes revenge on multiple men who have assaulted women. The staging is littered with garbage bags and is starkly lit in parts, really adding to the dark and sometimes dirty nature of the material. The addition of Benito Di Fonzo as a live musician with guitar and drums also adds a dirty grunge feel and certainly enhanced the visual material.

Cockroach broaches some really difficult and upsetting material and has some really uncomfortable moments involving sexual assault. As this is a revenge tale, there is no pleading for equality or understanding. At times the material was unrelentingly gloomy and confronting, however, the topic of gendered abuse is not a laughing matter. Cockroach is certainly unapologetic about this and, while there are moments of satirical humour, the horror of gendered violence and the idea of revenge are the driving forces of the show.

All credit goes to Leah Donovan for her performance, as she is brimming with the visceral rage the part demands. Donovan is unrelenting with her anger and sells the moments of revenge with the burning passion of someone who has been wronged repeatedly and is taking their life back. She also performs the satirical moments with aplomb as well, switching with ease between these moments and that of her vengeful character.

The oft-repeated line from the show, “this is a cautionary tale,” is most definitely true of the dark and confronting Cockroach. Leah Donovan performs the material as if she has summoned every ounce of darkness within to become the vengeful cockroach of the title. While it is often uncomfortable, Cockroach offers an honest and brutal perspective on gendered violence that will stay with you for days. An important and vital show in the midst of the #MeToo movement.