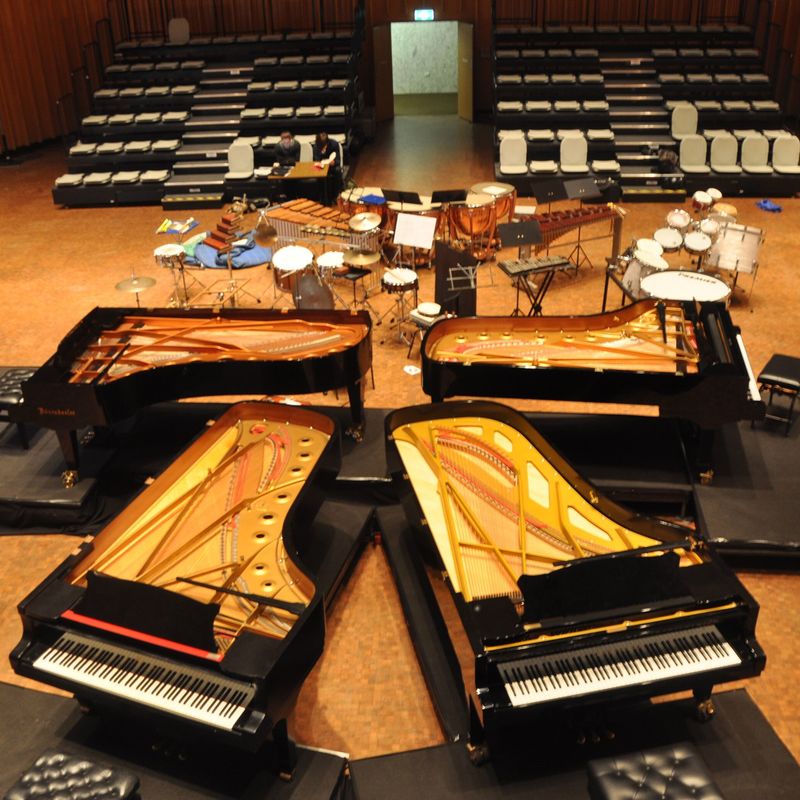 In the forty or so years since Steve Reich composed his seminal work, Music For 18 Musicians, it has proven to be a highly resilient, and continuously relevant, piece.

It has come to be regarded as one of the most important pieces of music written in the last century and its influence has rippled through many genres of music since it was first performed in 1976.

The enduring appeal of the piece was confirmed as Elder Hall was completely filled with an expectant audience who seemed both, in equal parts, acquainted with, or curious about, Reich’s ground-breaking composition.

At the conclusion of the performance, the audience delivered a loudly appreciative standing ovation, suggesting that the experience of hearing the music performed live, as opposed to hearing a recorded version of the work, was as much for them as it was for me, a revelation.

From the front row, the dominant sound was the two person string section, who were by far the most animated, therefore also becoming the visual focus. As the strings were not so prominent on the original recordings, where the percussionists claim the musical foreground, this shift from the familiar listening experience forced a new appraisal of the piece. New aspects of the work opened up as a result.

Over the years, critics have applied descriptors such as ‘tender’, ‘joyous’, and paradoxically, ‘visceral’, to Reich’s most famous work. These descriptors, for me, seemed hard to justify, but, in this performance, there was certainly a sense of transportive joy created by the ensemble and I can now see the validity of such claims.

Individual musicians found it hard to repress their joy, and their smiles, as the piece progressed. Many swayed or tapped their feet to their own specific, and seemingly contradictory, rhythms as their contributions merged with the other musicians in a constant series of slowly vacillating repetitions.

The eighteen musicians – or was it nineteen as listed on the information sheet handed out to the audience? – were uniformly on song. With no conductor to guide them through the performance, they had to rely on musical cues from their fellow players, primarily reacting to cues from the vibraphone used to signal bar changes.

Their collective concentration was unwavering, delivering a masterclass in musical precision.

Some of the repetitions on individual instruments are required to continue for long periods and subsequently require a high level of physical stamina to maintain the accuracy of the rhythms being played. It was impossible not to be impressed by the energy and physicality of the performers. The critics’ application of ‘visceral’ as one of their initially odd descriptors of the piece also started to make more sense as a result.

The intricate contrapuntal vocal rhythms were also fascinating to hear live, but even more so to watch. The four vocalists, working in conjunction with the wind instruments, at times appeared to be shivering rather than singing, as they created looping waves of ethereal vocal sound from half syllables and stifled exclamations.

This is definitely emotionally manipulative music, the pulsing rhythms are irresistibly hypnotic in places, and yet, at those points where you feel yourself succumbing to its seductiveness, slight shifts in volume or pace occur to bring your concentration back into sharper focus, teasing you out of any momentary complacency.

Reich originally described the various sections of this work, in their close resemblance to each of the other sections, as members of a family. There are certain ‘resemblances’ that are apparent in each member of the clan, but, when examined individually, every one is clearly unique.

And it is in this close relationship between each section where the critics’ ‘tender’ descriptor can be applied too. Each section is supportive of each other, just as a close family would be, until the very last moments where, in echoes of the opening section, the music slowly and quietly fades out and the last pulse ceases.

We are left, as we are when a member of our family leaves us, elated to have had the shared experience, but sad that it has had to end.

Steve Reich Music For 18 Musicians was performed at Elder Hall in the RCC on Friday 13 March 2020.